The Thoth Tarot Cards Deck & The Book of Thoth by Aleister Crowley: A Review

There are so many different Tarot Cards decks out there on so many different subjects and themes that it can no doubt get confusing for you in deciding which deck you want to buy. This is especially the case if you're new to all of this. But don't worry because it's not as hard as you think.

All you need to do is remember that it's ultimately your choice as to what deck you want to buy and have for yourself. A Tarot Cards deck will have its fans and its critics. You can check what people have to say about a Tarot deck but follow your gut feeling and your intuition in deciding whether to buy or not.

If you like the deck and you feel that it resonates with you, then, by all means, buy it.

All Tarot Cards decks have very good artworks and symbolic designs. Check out your chosen deck and see if you like the artwork. After all, why use Tarot Cards who's artworks you do not like?

Of course, before purchasing something, it's best to be informed with what exactly you're buying. Take your time so you can see if it's really something you want to buy or not.

Should you buy the Thoth Tarot Cards deck?

So you've decided to purchase a Tarot Cards deck for yourself.

Wading through the various Tarot Cards decks out there, you've selected the Thoth Tarot Cards deck as a potential deck that you might want to purchase. The question now is should you buy this deck? What do people have to say about this deck anyway? How can you decide if you really should buy this deck or not?

Aleister Crowley Thoth Tarot Deck
The Tarot Cards from the Thoth deck are simply magnificent with such powerful imagery and symbolism. The artwork is stunning and the cards have high quality. Many people love this deck and have only nice things to say about it. This one includes 78 Tarot Cards alongside an instruction booklet.
Buy Now

This deck is one of the most popular and well-known decks out there.

Even if you're just a beginner to Tarot Cards, just a little searching around and you will already be hearing about the Thoth Tarot deck alongside the ever-popular Rider-Waite Tarot deck.

This deck was designed and made by Aleister Crowley and was then painted by Lady Frieda Harris.

Some information on Aleister Crowley

Aside from the Thoth deck that he created, Aleister Crowley is also really famous and well-known for doing a lot of things as an occultist and writing a lot of books, among other things.

He is controversial and notorious especially when he was still alive and he has even been dubbed as "the wickedest man in the world".

Regardless of what many have to say about Aleister Crowley, there are many who love his Thoth deck.

Many use the Thoth deck and some even say that it's one of the best, if not the best, decks out there.

It all comes down to a matter of opinion of course. So see for yourself what you think of Crowley's Thoth deck.

The artwork of the deck is, of course, different from all the other decks out there but many find this appealing.

They love the artwork and think that the Thoth deck is simply amazing and filled with a lot of powerful symbolism and imagery that help in reading and understanding the cards.

One of the books that Aleister Crowley wrote is called the Book of Thoth, which is featured above. Its full title is actually: The Book of Thoth: A Short Essay on the Tarot of the Egyptians, Being the Equinox Volume III No. V.

Crowley wrote the Book of Thoth to go alongside his Thoth deck. Refer to this book to help you understand Crowley's Thoth deck.

This book aims to aid in further understanding the Thoth deck such as its symbolism and imagery, how it's used, what each of the cards mean and many other things.

It also provides a deeper look and more insights into the Tarot and its relation to the Qabalah and Astrology, among other things.

Can beginners use the Thoth Tarot Cards deck?

Many are saying that the Thoth Tarot Cards deck might be too complicated for beginners and that they should start with a deck that's easier to understand like the Rider-Waite deck, which is the one that's usually recommended for beginners.

However, know that, no matter which Tarot deck you end up using, if you're just a beginner, then you will still end up having to study and learn how to read the cards and how to use a deck anyway.

If you like a deck, then by all means buy it and learn how to use it. If you think the Thoth deck is the one for you and you feel that it resonates with you much more than the other Tarot decks out there, then go ahead and buy the Thoth Tarot deck.

What do you think about Aleister Crowley's Thoth Tarot Cards Deck?

It's much better to start with a Tarot deck that you actually want to learn with. Don't pick a deck just because it's supposed to be for beginners or because it's popular or for any other reason that isn't your own.

If you do that, you might just end up thinking that learning Tarot Cards is a chore because you don't like what you're doing and you don't feel like learning with the deck you're using.

So, if you really want to learn the Thoth deck, then buy it and start learning it even if you're just a beginner to Tarot Cards. If you're really serious about learning the Tarot and you really want to be able to use the Thoth deck, then you'll be motivated to learn how to use this deck even though you might have some difficulty with it. Just don't give up and you'll soon learn how to use this deck. 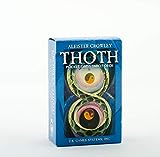 Once you have your very own copy of the stunning and wonderful Thoth Tarot deck and the Book of Thoth, what are your thoughts?

Some find Crowley's writing to be confusing and complicated while some might even consider it dated as it has been written many years ago.

There's nothing to worry about though because it's not impossible to understand Crowley's deck and book as evidenced by the many people making use of the Thoth deck.

Furthermore, there are actually books that have been written to help you in understanding the Thoth deck and the Book of Thoth.

These books aren't meant to replace Crowley's book, rather, they are meant to be read alongside the Book of Thoth.

Here are two books that can help you:

Understanding Aleister Crowley's Thoth Tarot book is packed with a lot of information and details to really help you understand Crowley and his book and deck.

You'll be getting information on such things as the Book of the Law, the Holy Guardian Angel, and the Tree of Life.

You'll also be getting information, details and meanings on each of the cards in the Thoth Tarot deck.

There are a lot of chapters in this book and it's actually separated into part 1 and part 2. Part 1 deals with the background information regarding Crowley and his works while part 2 focuses on the Thoth deck itself.

2. The Thoth Companion: The Key to the True Symbolic Meaning of the Thoth Tarot by Michael Osiris Snuffin

There are a lot of tables, lists and figures to make things easier for you to understand.

There's even a glossary of terms for quick reference.

Each of the cards is given a few pages where its symbolism and imagery is explained in much detail.

Do you have your own Thoth Tarot Cards deck?

Aleister Crowley's Thoth Tarot Cards deck may be complicated and difficult to understand for some but if you're really determined to learn and use this deck, then nothing is going to stop you from learning it and you will soon be able to fully understand and make use of this deck.

If you feel that the Thoth deck is the one for you and if this is the deck that you prefer to use, then go ahead and buy it.

In the end, it's all just a matter of preference for everyone. You don't have to like something just because many other people do. If you don't like the Thoth deck, then check out other kinds of Tarot decks.

For more Tarot Cards-related information, check these out: