Homosexuality and the Grace of God

I am writing this hub because I see so many different hubs on here with so many different views and ideas, and I understand people’s rights to voice their opinions and I would fight for their right to do it. But it also amazes me by a lot of the ignorance that spews out of some people about the subject of discrimination; i.e. homosexuality, race.

I am not a religious person, but I am a spiritual person. I believe in God and that he is loving, understanding, tolerant, and patient, not to mention forgiving and compassionate and the adjectives go on and on. The thing that makes me upset is time and time again I read about the people who are calling themselves disciples of God, quoting Jesus word for word and actually having the opposite attitude that Jesus did.

I grew up in a Hispanic family and environment. To look at me you wouldn’t be able to tell that I was Hispanic because my mother and my father both descended from Spaniards, therefore, my father had very light skin and very light blue eyes. My mother has translucent skin and very beautiful hazel eyes, ergo, most of my sisters and I have light hair and light skin and have dealt with many prejudices because of this. It seems when we were in school we got comments all the time from our fellow Hispanics, that we were not real Mexicans, that we must be mixed with some white shit, their words not mine.

I also recall a time when I went to my best friends house for the first time, her name was Ann Marie, she had a pool in her backyard and asked me if I wanted to go swimming. When her mother found out she said right in front of me, “ Ann Marie, your little friend cannot go swimming with you because she is Mexican and so she must have lice. I cried all the way home and that embarrassment still haunts me.

Judge not lest ye be judged

So now that I am grown up I have to deal with the discrimination that follows my son around. If you read my other hub, “Raising a son that Happens to be Gay“, then you would know some of what we have gone through. But things just seem to get worse for my son as he was again discriminated against again, one for being gay, and two for being Hispanic, a double phobic whammy.

He works with the Air Force, he is a private contractor and goes to different bases all over the country, right now he is in South Dakota and he has experienced much discrimination there. Very recently, he went to a coffee shop and was setting up his laptop so he could do some work before he ordered what he wanted. I guess the owner asked him if he was going to order something, he said yes as soon as he gets organized. The owner proceeded to tell him that he should either order something or get out because he didn’t need a NANCY Indian not buying anything and using up all his wifi. My son proceeded to get very upset and he isn’t the sort to pick a fight or to even confront people because he hates that sort of thing, but this day he did and started telling the owner where he should go and by the way he would never be back to that establishment again, my son looked around and all the people in the coffee shop were just looking at him like he was the one that was the weird one. While he was getting his stuff to leave, the owner kept at him to get out and words were exchanged and he actually picked up my sons laptop and threw it on the floor and shattered it. Someone called the police and even the police took my son aside and told him that there were still a lot of racism in these here parts. My son called me and was devastated. This is what hurts me so much for my son. That there are so many ignorant people out there that are not only mean but also encourage others to be mean to people like my son in the name of God, Church whatever. Needless to say my son pressed charges and the guy paid for my sons laptop.

My son and I have been through a lot together and we still have the attitude that we do not throw judgments at people for the way that they live or the color of their skin. I consider myself to be a nice person and hate confrontations as well but I had to mention it here because some people just do not get it.

I have realized that there are a lot of hubbers out there that are spewing a lot of religious nonsense about sexuality amongst other things. It amazes me that the God that they keep referring to is someone that loves people unconditionally but the people who are speaking for God do not love people unconditionally and they have so much hatred in their hearts for people who are different from them.

When I started writing on hub pages I told myself that I wouldn’t get into it with people like this and would keep my opinions to myself. So far I have commented on a couple of hubs that have made me see blood red. And I have sunk to their level, but no more. I am going to stay on this side of the fence, with all the evil people who feel the same way as I do, its a lot nicer over here. And a word to the wise, to those hubbers out there, and you know who you are, Wake UP!! It is the year 2010 come out of your caves already.

Well I have said my peace and that is the last I am going to say on that subject. If someone cares to comment in a negative way on my hub you are so welcome to it, but you may not get the nice reply that my other readers do, in fact I may just ignore you.

"We struggled against apartheid because we were being blamed and made to suffer for something we could do nothing about. It is the same with homosexuality. The orientation is a given, not a matter of choice. It would be crazy for someone to choose to be gay, given the homophobia that is present."

"...secular journalists ... tend to accept uncritically the oft-repeated Evangelical Protestant and Conservative Roman Catholic definitions that the Bible is anti-gay. If these people were honest, they would have to admit that the Bible is also pro-slavery and anti-women." 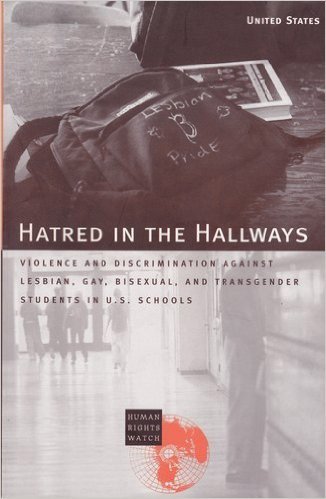 Hatred in the Hallways: Violence and Discrimination Against Lesbian, Gay, Bisexual and Transgender Students in U.S. Schools
Buy Now