Please see the bottom of this page for a list and links to the previous and subsequent articles.

Are Our English Translations Reliable Versions Of What Was Originally Written?

In my initial entry here, "The Premise And Definitions", I asserted that how we understand, define, and practice authentic Christianity must be informed by the Bible - otherwise we simply make yet another man-concocted religion and call it 'Christianity'. However, in order for that to be a reasonable and sound assertion, the Bible itself cannot be yet another religious text, it cannot merely be a record of man's notions about God and truth - if we are going to base our ideas and understanding about God and truth on the Bible, then the Bible must be God's own revelation of truth . . . otherwise we are only pushing our reliance on man-made religions back one step to a man-made religious text.

Now, if we count the Bible to be of divine origin, if we believe that indeed God inspired men to write what they wrote, that is an acknowledgment that comes from our own personal apprehension of it as we examine and consider it while we ourselves read it . . . that is a truth that is spiritually discerned, it cannot be clinically, objectively proven that the Bible is the inspired word of God, any more than it can be clinically, objectively proven that there is a God. However, whether the Bible is God's own word or merely a collection of religious thought gathered through the ages is not the real question that many pose when questioning the reliability of the Bible.

How can we trust the Bible, certainly over the many centuries and the many revisions it has been altered again and again, and some men surely must have deliberately inserted or removed portions to support their own doctrines so as to control the people?

What most folks seem to stumble over regarding basing our apprehension of the truth on what we find presented in the Bible is, basically, the old telephone game. The oft repeated argument of so many is, 'how can we trust the Bible, certainly over the many centuries and the many revisions it has been altered again and again, and some men surely must have deliberately inserted or removed portions to support their own doctrines so as to control the people?', etc, etc. If you find the message of the Bible speaking to your heart as you read it, if you personally come to believe that it is God's own inspired word, that is a private acknowledgment of spiritual evidence - however, it can generally and publicly be demonstrated archaeologically, historically, and textually that the Bible we have today is virtually the same Bible that Christians originally had.

Just briefly, to suggest the kind of documentation that exists:

. . . and this theme continues all the way to Shakespeare, etc. Much of what we accept and teach as fact, based on historic evidence, is not nearly so overwhelmingly supported by the historic evidence as the textual reliability of the Bible. We have extant over 5,300 ancient Greek manuscripts and over 10,000 Latin Vulgates of the Bible, many within a mere 40 years after the originals were authored. In addition, we have extant letters, sermons, commentaries, etc, from 1st century men, men who were intimate students and companions of Peter and John, etc, and these various letters, sermons, commentaries, etc, contain enough quoted passages of Scripture to construct the entire New testament and nearly all of the Old Testament - and it is the same Bible text we have today. There is more solid evidence that the shepherd David became king of Israel, that Jesus rose from His grave alive, and that Paul wrote to the church at Rome exactly what our modern English translations say he wrote to the church at Rome, more solid evidence of these Biblical accounts than there is evidence that there even was an English playwright named 'Shakespeare'.

The men who copied and later translated the ancient texts of Scripture believed they were handling the very word of God, every page was numbered, every line was numbered, every word was numbered and every letter was numbered, and portions were exchanged from copyist to copyist to check the '234th page, 17th line, 5th word, 3rd letter' to make sure it was the same letter as the original . . . these men would write 'God' breaking the pen after the 'G', then a new pen after the 'o' and another after the 'd', they held the text to be so holy and of divine origin that they did not want a pen used to write 'God' to then be used for any other word. The point being, these men were keen to guarantee that the text of the Bible remain unchanged from generation to generation. There are, of course, poor translations, there were men and groups who produced 'Bibles' to advance their own teaching . . . the Jehovah's Witnesses have their own translation, so we must recognize that not every Bible out there is an authentic translation of the original text - but there is an unbroken line of reliable English translations, translations that the most recent archaeological finds, again, demonstrate is the same Bible the earliest Christians had.

If, as you read it, you count the Bible to be God's revealed eternal truth or not, that is up to you and God - but this whole modern notion that the Bible we have today can't really be the Bible as it originally was, is simply demonstrably erroneous, there is abundant evidence that we can trust the Bible as the same Bible it was originally written to be. In upcoming entries here, I will talk about which translations are superior (most accurate to the originals) and what study aids are most useful, as well as my own thought s on, how best to study the Bible.

6. Regular, Normal Christianity ~ "The Covenant, The Promise, The Covenants, And The Gospel"

The Christian & Private Study - A 'How To' Guide

"Is Believing In God A Ridiculous Thing?"

"The Most Married Man In America" 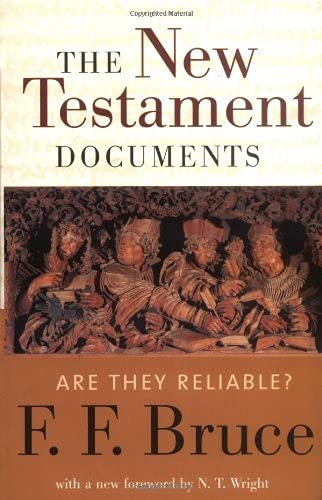 The New Testament Documents: Are They Reliable?
Buy Now

Next ~ we will continue, in an orderly manner, examining how Jesus of Nazareth is perceived, the concept of the Trinity, the atonement, the gospel message, the church, etc, etc . . . once we cover these essential Christian teachings from an orthodox historic and Biblical perspective, we will examine some of the specific ideas popular contemporary American Christendom advances.

"Warm affections, without knowledge, can rise no higher than superstition; and that knowledge which does not influence the heart and affection, will only make a hypocrite"

Please do visit my other hubs ~

"Leonard - The Best Dog Ever"