The Spirit of Fear

For God hath not given us the spirit of fear; but of power, and of love, and of a sound mind. 2 Timothy 1:7

If fear doesn't come from God the Creator then where does it come from? The Bible says the spirit of fear comes from Satan.

So we must be:

Be sober, be vigilant; because your adversary the devil, as a roaring lion, walketh about, seeking whom he may devour: 1 Peter 5: 8

When we read the word sober most of us probably automatically think "not drunk" well that is one definition.

There are seven definitions for the word sober in the dictionary the one I thought that was most fitting for this verse was:

ever awake and alert; sleeplessly watchful.

Be sober, be vigilant; because your adversary the devil, as a roaring lion, walketh about, seeking whom he may devour:

Lions are deceptive creatures. They do most of their work in the nigh time, when no one is around watching. Under cover of the dark skies, they become great hunters and predators. With their beautiful tan hides they are camouflaged. Using this concealment to their advantage, lions like to stalk their prey. The lion's fastest speed is around 35 miles an hour for short distances they don't run down their food very often. They creep slowly toward their victims behind the cover of the tall grasses of the plains, and with a sudden dash, spring and pounce onto their prey.

Besides their natural camouflage, they also have excellent night vision, an acute sense of smell and hearing to help them stalk under the veil of darkness. To help their chances, they hunt within a specific territory, roaming about with a company of lions, called a pride. Lions are selective and careful hunters, picking off weak stragglers, the old and the sickly. They will assault the herd or pack if needed. A lion's body is well matched for killing. Each toe has a strong retractable claw, up to three inches long. The lion will launch itself onto its prey, perpetrating deep gashes and wounds.

In addition, the lion's jaws open up to twelve inches wide and are powerful enough to crush a bull's spine with only one bite. A lion has thirty teeth, none of which are meant for chewing, but only ripping and tearing. It will bite, claw and restrain the battering victim, looking like he is playing with it. Even with all these deadly weapons arrayed against him, the victim's death does not come quickly. It may take ten minutes or more. The last thing the lion does is go for the throat.

Be sober, be vigilant; because your adversary the devil, as a roaring lion, walketh about, seeking whom he may devour:

Submit yourselves therefore to God. Resist the devil, and he will flee from you. James 4:7

"Finally, be strong in the Lord and in his mighty power. Put on the full armor of God so that you can take your stand against the devil’s schemes. For our struggle is not against flesh and blood, but against the rulers, against the authorities, against the powers of this dark world and against the spiritual forces of evil in the heavenly realms" (Eph. 6:10-12).

There is no fear in love; but perfect love casteth out fear: because fear hath torment. He that feareth is not made perfect in love. 1 John 4:18

So when you have thoughts of fear Submit your thoughts to God. Resist the fear that comes from the devil and he will flee from you. Memorize scriptures about fear so that you can say them in your mind in the time of need. 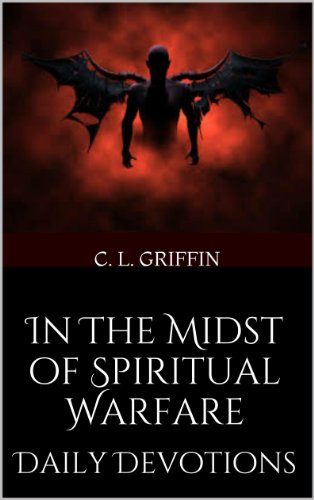 In The Midst of Spiritual Warfare Daily Devotions
Buy Now