Just a quick background. Tanfoglio is an Italian manufacturer of weapons mostly used for competitive shooting and personal defense. Their handguns are very popular in Europe and are imported into the United States by European American Armory Corporation (EAA). Tanfoglio's handguns look very much like the CZ 75 which is manufactured by Česká zbrojovka because that's how Tanfoglio expanded their business in the 1980's... producing clones of CZ 75 for IPSC and IDPA practical shooting.

The Tanfoglio Witness Polymer Compact is a semi-automatic pistol available in 9mm, .40 SW, 10mm, and .45 ACP caliber both single-action (SA)/double-action (DA). The barrel length is 3.6 inches and weighs 1.75 lbs (28oz) unloaded. This is a great pistol for lawful concealed carry, home defense, as well as an enjoyable shooting experience. Compact polymer handguns will always have a bit more recoil than a full-size steel handguns so I would recommend the 9mm caliber version especially for women. Don't worry too much about the stopping power of 9mm ammo because modern bullets have great expansion and penetration performance under random circumstances. You also get more rounds with 9mm (14 + 1).

The grip is ergonomically designed to fit comfortably even into the web of small hands for solid and easy shooting. The backstrap is deeply curved combined with an extended beavertail that helps maintain a high grip which is very important in controlling the recoil. It also greatly reduces the risk of slide bite.

The low profile windage adjustable sight is an important feature to note especially for concealed carry use because it is less likely to get knocked out of alignment in concealment.

The integral accessory rail is an added advantage if you want to install rail mounted lights or lasers which may come in handy at night. The rail also gives the Witness Polymer Compact handgun a more tactical look. It will add a little to the overall weight of the handgun and might need a special holster but you can surely appreciate having more control of the gun at night compared to having only one hand and the other holding a flashlight or phone. 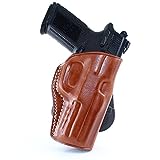 Premium Leather OWB Paddle Holster with Open Top Fits, Eaa Witness Pavona Compact Semi Auto Pistol 9mm Luger 3.6" BBL, Brown Color #8093#
Masc Holsters was established by Mr. Gyunur Tezcan in 1995 as a medium size of business in Istanbul Turkey, specialized in hand-made leather and cordura holsters for pistols and its accesorries. As a high quality and innovative designs, Masc Holster gained worldwide glory since attended to the international fairs as IWA Classic & Outdoors in Germany, and to others with the co-exhibitors in Bulgaria,Russia,Italia and US of America. Most importantly, Masc Holster's hand made leather products are to be preffered by the V.I.P. persons and their body guards because of its practical and safe usage.
Buy Now

Another great advantage that single out Tanfoglio Witness P Compact is the capability to be converted to different calibers. I am a huge fan of conversion kits because it gives me the flexibility to shoot in a smaller caliber using the same frame and grip which is totally awesome! Changing grip makes it difficult for me to become consistent and master accuracy.

For women shooter out there who wants to have option in color that speak to them as women, there is the pink and purple finish adding touch of style and femininity. Nothing beats a handgun that fits your purse or your clothes... it makes you look elegant and at the same time dangerous :)

The EAA suggested retail price for Tanfoglio Witness Polymer Compact is $571 at the time of this writing which is less than the average price of compact pistols of the same built.