How big of a College Football win was Syracuse's over Mizzou? Take the quiz at the bottom!

Syracuse football! Check out for free! 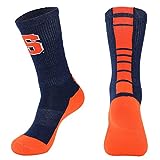 Its Great news for S.U. Fans, right? I say yes, because Syracuse will get a bid. There is no doubt about that! S.U. had about the toughest out of conference schedule in the nation, knocked off a top 10, undefeated team, and nabbed a big road win. Even though they will beat Temple on the road, they don't need to in order to play again this year.

Do the Orange need to win at Temple for other reasons?

Syracuse already has a winning record in the conference, and can do no worse than 4th place. That would send the Orange back to the Pin Stripe Bowl or to the Belk Bowl. However, a win against Temple this Friday, could get them a tie for first place in the conference. That would send them to the Russell Athletic or the Florida Citrus Bowl. If Rutgers wins out, S.U. is in a second place tie with Louisville and has the tie breaker. None of this is bad for the preseason pick to finish 7th in The Big East!

S.U.'s win not only placed them ahead of the Missouri tigers for a bowl bid, but proved that Syracuse is improving. It also takes the pressure off of them when they travel to Temple on Black Friday.

The key intangibles are that the senior connection is primed and peaking. This is the offensive charge we Cuse fans have been waiting for! Also, think of the confidence that the Orange players will have knowing that they scored 2 giant wins at the end of the season. Temple in my estimation, is still a must win because it effects the Bowl Game that S.U. is invited to, and it keeps the momentum alive. That may play big into the rebuilding phase that Syracuse Football is still in.

Overall, Syracuse lost a few games that they should not have, but can salvage that with a big bowl win and 8 victories.

The Cuse are fun team to watch and in a way, they are just getting warmed up! Happy Thanksgiving and LET"S GO ORANGE!