5 Sensational Feats at the Sochi Paralympics

The Unequaled Adventure Of Paralympians

Have you ever strapped yourself onto a small piece of metal, slid off a ski jump and done a back flip - or skied downhill blindfolded at 75mph or faster? Our world's Paralympians do even more than that.

The Sochi Winter Paralympics was the most widely and frequently advertised and media-covered of adaptive sporting events since the official start of the Paralympiad in 1960. That was the year that John F. Kennedy was elected as US President. His administration gave rise to a different sort of adaptive sports as well - the Special Olympics. Both sets of athletic games are gaining momentum and attention.

During the intervening decades between Rome 1960 and Sochi 2014, the public has not seen the equal of feats accomplished and crashes weathered by the 2014 Paralympians. Untrained people attempting to succeed in the 2014 events and survive the Sochi mishaps would ordinarily come out of them in a dead condition. Training in adaptive sports is difficult, demanding, and serious.

Adaptive athletes who competed at Sochi, like Siberian "People of the North", survive challenging events, severe conditions, and obstacles to their human survival. They face possible death at every task they take.

At the Opening Ceremony of the Games, IPC president Philip Craven said: The sport you witness here will change you. Not just for now, but forever.

The athletes did change the watchers in all the venues, behind the cameras, and in homes where America's NBC, Britain's Channel 4, and Canada's CBC provided more coverage than ever before offered any Paralympic Games. Online streaming and archiving added even more coverage. The Paralympics are for real sports and the world is recognizing them.

The events and feats of the unbelievable adaptive athletes left spectators with gaping mouths and eyes stuck open so wide they could not shut them.

The sport you witness here will change you. Not just for now, but forever.

Events are broken into categories according to type and severity of physical impairment experienced by an athlete. For example, blindness is categorized into three levels that include total blindness and two levels of partial sight. The partially sighted in these events are often legally blind, but can see some shapes and light/shadow.

In downhill events, the sight impaired athletes have skied at up to 75mph or faster, essentially without eyes and down the same courses used by the able-bodied Winter Olympians that competed two weeks before them. No course adjustments were made to reduce challenges. Therefore, the Sochi Paralympians were more greatly challenged than the able-bodied competitors.

Russians and Ukrainians Serious About Competitions

By Day 5 of the 10-day 2014 Winter Paralympics, Russia had earned a landslide 47 medals, while Ukraine was in second place with 14. Canada and the USA each had 9 medals, but USA had no gold medals, while Canada earned 2 Golds. In addition, USA ranked down in 13th place overall, with the other three nations placing in the Top Four.

Canada excelled at sled hockey, but Russia and Ukraine were prepared for every event.

Comparing team sizes, Russia listed 83 athletes, USA included 80, Canada logged 49, and Ukraine listed 23. Canadian Paralympiams listed a larger percentage of email addresses, Facebook pages, and Twitter accounts online for fans to use than any of the other three nations at http://www.paralympic.org/feature/canada-8-facts-sochi-2014-paralympics.

Team Ukraine and Team Russia members included only two members each who shared social media addresses. Only about 2/3 of Team USA shared this information. Canadian Hockey enjoys mass fan followings in both regular and adaptive-sport segments and fans regularly make use of the social media to support their teams and athlete-heroes.

Internet access may be more limited in Russia and Ukraine, but surely Team USA and their fans could increase interactions. The fan support would help our adaptive athletes.

The discipline, strength, concentration, and balance required to sit ski rival the skills required in several other sports, both able-bodied and adaptive. Tolerating the confining condition of being strapped to a small metal sled is not everyone's pleasure.

Wiping out on a slope in this contraption or successfully completing a back flip off a ski jump in it are each three steps shy of insanity - and people love to watch it all and gape.

Back Flip and More

The sit skier, whose legs are largely missing or non-functioning, is strapped securely onto a small, expensive sled that usually features a single narrow ski on its underside. The athlete has no way of escaping the sled in a crash, although straps sometimes break loose. For steering, the skier has only two short outrigger poles to help navigate the fast courses down snowy slopes. This is an extreme sport not included in the X-Games and able-bodied skiers appreciate how hard sit skiing can be. Adding flips seems impossible.

Para-games outside of the Paralympic events include sit ski freestyle with back flips and other tricks. In the future, I suspect that we may seem them in the Winter Paralympics.

Sit Skiing is likely one of the more dangerous para-sports. During the first Saturday of the 2014 winter Paralympics, 11 sit skiers out of 27 crashed or slid off course into the protective fences lining the Olympic ski course. Spectators saw cartwheeling athletes and sit-ski equipment, bouncing athletes high above their heads, demolished equipment sliding across the course, and airlifts to hospitals. No one was permanently injured as of this writing and one female participant had a terrible crash that left her with only a swollen lip.

Matthias Lanzinger, a former able-bodied Austrian skiing champion, lost one leg in a crash during a competition. Using a prosthesis, he sandwiched to adaptive skiing. He says of the sit skiers at the 2014 Games:

But the sitting category are all absolutely crazy heroes.

This winter sport was added as a new event in 2014 and only downhill para-snowboarding was offered (standing para-snowboard cross). With advancing technology, equipment, and training techniques, we should not be surprised to see some sort of half-pipe event in the future.

Para-snowboarding in the Games is open to people with blindness or deafness, other physical disabilities, and conditions that are called intellectual disabilities (not added until 2002). The latter include

Can you imagine having any of those challenges and standing on a snowboard, flying over the snow with others by your sides?

The Gold Medal Winners in both Women's and Men's Standing divisions earned the same number of points: 850. This is an unusual occurrence in most sports, the women usually earning fewer points or requiring a longer time to finish events than do male competitors.

The male and female Silver Winners both earned 800.95 points and the Bronze Winners both earned 765.00 points. The male division did have many more entrants than did the female's, with a total of three athletes. The Men's Sitting division saw three entrants with the same scores as the winners in the categories above.

Winners, as published by the World Snowboard Federation:

MEN: 3 men competed in the sitting category, all winning medals)

Made In the USA

I am encouraged in my thought that half-pipe events for para-skiing and para-snowboarding may be in the future, because the WSF 2012 World Games included Visually Impaired Para-Snowboard Cross as a Demonstration Event.

Adaptive sports' athletes are being encouraged and supported to try increasingly exciting, demanding, and dangerous (with safety precautions) variations of their sports. New events are often auditioned in World Games and X-Games before athletes and coaches approach the Olympics/Paralympics for consideration and I think that in my lifetime, a version of half-pipe events will be featured in Winter Paralympics Games.

4) Para-Half Pipe in the USA

Oregon Adaptive Sports reported in 1859 Oregon Magazine online in January 2012 that one of their certified instructors helped a student, a boy with cerebral palsy, to sit ski into a half pipe, slide up the walls, shoot out the other end into the air, and land safely. This may be the first step to developing Para-Skiing Half Pipe in the USA.

Note: Women's Cross-Country Skiing at 12km distance has only one category: Sitting.

Ukraine and Russia were currently at war during the Sochi Paralympics.

Russia had invaded the Crimea, an autonomous republic within Ukraine, with an eye on annexing that land and citizenry. Further Russian leaders sank three old Russian naval vessels in an outlet of the Black Sea inroder to prevent Ukrainian ships from passing out of it. Still, Ukraine's Paralympic tam went to the nearby Sochi Olympics.

As a protest toward Russian aggression, Ukrainian athletes did not march in the Opening Ceremony, save for one wheelchair athlete who was the chosen flag bearer for his country. A biathlon participant wheeling his chair alone, Mykhaylo Tkachenko remained serious as the crowded stadium roared a cheer for him as he entered. This was broadcast online and over the large TV networks that purchased the rights to broadcast the Paralympics in Sochi.

The women's 12km sit ski race brought on additional Ukrainian actions. When Ukrainian Lyudmila Pavlenko won Gold with a time of 38 minutes, 54.3 seconds, she dedicated her medal to Ukraine.

Another Ukrainian took Silver, but for the United States. This was Oksana Masters of Louisville, Kentucky, with a finishing time of 39:16. Her legs were damaged in the womb by Chernobyl radiation poisoning and her parents did not want her. Passed among orphanages, she was finally adopted by an American.

Oksana not only sit skis, but rows in the Summer Paralympics. In the Winter Paralympics' 6km biathlon event in 2014, Masters finished in fourth place, just beyond the medal range.

Another member of Team USA was Russian: Tatyana McFadden of Maryland. She came in fifth place in the 12 KM sit ski women's event, but had previously won many wheelchair races of all distances in summer para-sports outings. Born with spina bifida, she was adopted by an American.

The Bronze went to Russia - Svetlana Konovalova. If Ukraine could not win the war, they could win Gold in this one event, at least.

Pavelenko mentioned the famous poet and artist Taras Shevchenko of Ukraine, whose 200th birthday was celebrated during the month of March and the Paralympics. Through his literary style, he developed the Ukrainian language that is in use in the 21st century. He longed for his nation to become a separate, independent country from the Russian Empire of the 1800s. 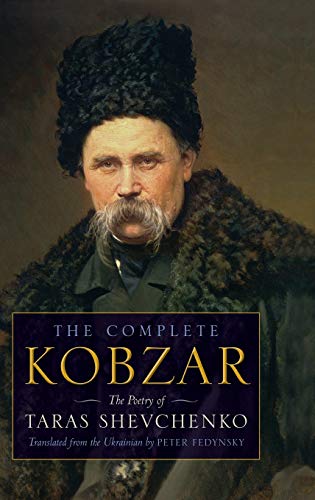 Kobzar
His writing developed the Ukrainian langue to its modern form.
Buy Now

Additional controversial events occurred every day of the 2014 Paralympic Games, yet Ukraine stayed to finish their goal of competing in the full 10-day event. By Day 5, Ukraine was in third place in medal achievements among 44 countries, with many fewer athletes than the other countries in the Top Five rankings.

Ukraine and Russia both possess determined teams of adaptive athletes - military personnel, and citizens - as the media showed from January through March 2014.

Political and Combatant Conflicts During Paralympics 2014 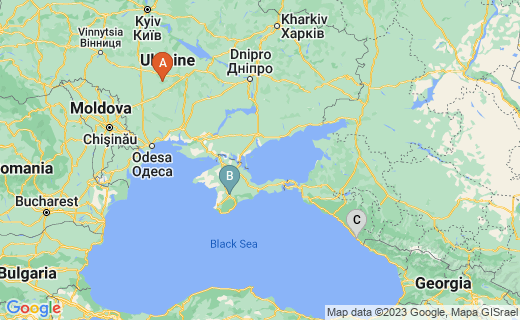 Ukrainian protests occurred during the Sochi Olympics and continued intermittently through interim days and the 10 days of the 2014 Paralympics.