USA vs. Bosnia-Herzegovina and Soccer Memorabilia

August 14, 2013 was a special day in U.S. Soccer history with a 4-3 win over Bosnia-Herzegovina. This put the United States Mens National Team in a growing winning streak. Starting off with a lackluster first half with Bosnia-Herzegovina leading with 2-0, the U.S. team seemed doomed to finish with their first defeat in a very long time.

Getting his first start with the United States steam, John Anthony Brooks proved that he could play just as well as the senior team.

For all the soccer fans, enjoy some memorabilia to decorate your bedroom and the rest of the house.

Photo credit: Amazon. See below. (Minus the flag in the background. That part was added by me.)

Laminated I Love USA Soccer (World Cup, Red) Sports Poster Print 13 x 19in
This laminated poster that shows your love for the USA Soccer team will look good in the bedroom, recreation room, man cave or any room.
Buy Now

The Keeper: A Life of Saving Goals and Achieving Them
As described on Amazon: The Keeper recalls his childhood, being raised by a single mother who instilled in him a love of sports and a devout Christian faith that helped him cope when he was diagnosed with Tourette’s in the fifth grade. He looks back over his fifteen-year professional career—from becoming the youngest player to win MLS Goalkeeper of the Year to his storied move to the English Premier League with Manchester United and his current team, Liverpool’s Everton, to becoming an overnight star after his record-making performance with the United States Men’s National Team. He also talks about the things closest to his heart—the importance of family and the Christian beliefs that guide him. Told in his thoughtful and articulate voice, The Keeper is an illuminating look at a remarkable man who is an inspirational role model for all of us.
Buy Now

August 14, 2013, Soccer Everton goalkeeper and captain of the United States Men's National Team (USMNT) forged ahead of their clash with Bosnia. The 34-year-old led the U.S team which relies on young players a lot. Clint Dempsey was absent for the game. Many European-based players had been given a chance and Coach Jurgen Klinsmann was delighted to see these players.

Herculez Gomez was absent due to a knee injury and will be out for four to six weeks. Michael Orozco Fiscal was not available due to hamstring injury. Landon Donavan was also excluded from the squad. Donavan scored a hat trick on Sunday and is now just five goals away from breaking the record of Jeff Cunningham. Donavan has already scored 130 goals in the MLS.

There was a rumor that the German coach Jurgen Klinsmann and Dempsey have developed some differences after latter being transferred from Spurs to Seattle. But the coach was excited to have the striker back to the country. He said, "I am thrilled for MLS, because you have an outstanding player now hopefully filling more stadiums and getting even more kids and people excited about the game."

The friendly against Bosnia is an important one as the new faces will be tested. Brad Evans and Eddie Johnson are the only two MLS players who are included in the roster. Bosnia and Herzegovina provided a stiff competition to Coach Jurgen Klinsmann's side.

Edin Dzeko, Asmir Begovic and Miralem Pjanic are the top soccer plays for Bosnia and Herzegovina and a challenge facing off with the young American side.

The crowd cheered as Jozy Altidore pulled a hat trick the second half of the friendly rallied from a two goal deficit to win with a 4-3 over Bosnia-Herzegovina.

The USMNT now has a 12 game winning streak record.

Sep 6, 2013 will be Costa Rica - USA for the CONCACAF World Cup Qualifying.

Clocks to Be On Time for Soccer

A Gift That Keeps on Ticking

Time to start decorating that soccer bedroom for the sports player and don't forget a wall and desk clock will make sure your child will get to soccer practice on time. Perhaps you would like a soccer clock for your man cave in order to know the time the USA soccer team will be on ESPN or your favorite sports channel.

These are all offered on 3DRose a custom print on demand site. 30 money back guarantee if not satisfied. I am one of the designers there. You can find Sandy Mertens on all the products 3/4's down each of the pages. The photo above shows some of the soccer wall clocks and below are the desk clocks. Click on these links below to view the soccer clocks. 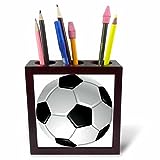 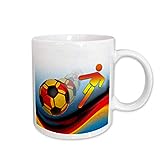 An exciting game with USA winning.

Most children today have a computer in their room. Don't let them settle for an ordinary mouse pad. Give them a decorative soccer ball mouse pad, along with a matching water bottle. A pen holder is a plus to organize the desk. Just for fun, add a soccer ball plate to the decor.

The water bottles can be taken to all the soccer games. A mouse pad helps keep the mouse clean and leaves no scratches on the desk. Those are wonderful gifts for children and adults alike.

This funny greatest soccer player t-shirt and hat represent the non-player. The middle aged balding man who is trying to relive his youth or trying to prove something to his children.

Are you a soccer fan and what team do you like?