Jet is a stone belonging to the Organic Gemstones category. This stone is said to have derived its name from the French word ‘jaiet’ for the same material. As the name indicates it is seen in black or dark brown color and is formed from organic fossilized wood. In other words it is a dense variety of lignite formed by the submersion of driftwood in the mud of the seafloor for millions of years which is then compacted and fossilized. The color of this gemstone is as a result of the carbon content in the stone. Jet is also known as Black Amber although it is not actually Amber. Another name associated with this gem is Black Jewel. Jet becomes electrically charged when rubbed with wood or silk. It has a hardness of only 2.5 on the Mohs scale. It is a good Gemstone for those born in the Zodiac Sign of Capricorn.

Jet is said to be used as a talisman from ancient times for protection from fears, ghosts etc. It also has the reputation of mourning jewelry because of its color. Queen Victoria is said to have worn it following the death of her husband Prince Albert in 1861.This gem should be preferably set in silver jewelry. It is also fashioned as rosary beads. This stone is found in many places including England, the United States, Poland, China, Turkey, France, Germany, Spain, India, Portugal and Russia. 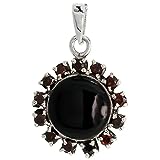 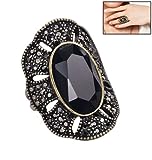 Jet is a very Good stone to be worn by those who wish to bounce back after a break up of relationship failure or recover after the death of a partner. It is also a good stone to be worn by the victims of domestic abuse to come out of the grief and emotional turmoil. It is a good stone to be kept in the cash box or on the wealth corner. Since Jet is a money attracting crystal, it is suitable to be kept in cash boxes and lockers at home or business place for stable finances and overcoming debts. Jet stones are also auspicious for those starting new jobs to bring good luck and success.

Jet Gemstone is said to draw out negative energies and unreasonable fears and guard against violence and illness. If you are affected by negative vibration from others like jealousy, evil eye etc, you may wear a jet pendant around your neck or keep a stone on the pocket for protection and to dispel negative energy. For psychic protection and purification jet can be combined with black tourmaline or smoky quartz. This powerful protection stone also can assist in cleansing the base or root chakra. Mystically Jet is considered a stone of sympathy, healing and psychic experiences. This stone can be used to open up to psychic experiences and for assistance and receiving spiritual enlightenment. For healing purpose jet can be combined with amber or sugilite. For releasing stress jet is combined with lepidolite. It is used by healers to aid the cleansing of the liver and kidneys. This stone is also used to balance mood swings and treat depression. Jet is considered beneficial for in treating epilepsy, toothaches, migraines, stomach pain, menstrual cramps, colds, glandular problems and lymphatic problems. If you have trouble sleeping put one Jet on one side of your bed and Amber on the other.

Traditionally, Jet should be buried along with the owner when the person dies. It should not be resold or given as inheritance. However, if you have acquired such a jewelry which has sentimental value, use it only after it is thoroughly cleaned and purified for a couple of days. After washing it in water, dry it outdoors to expose it to sunlight. Jet used for Healing purpose also should be thoroughly cleaned after every healing session using a stream of lukewarm water and then charging it for two hours together with rock crystal or drying it in the early morning Sun.