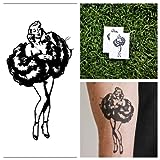 I love to find various tattoos, especially of people we know, and see how tattoo artists and designers depict and show them.

So when I went looking for Marilyn Monroe tattoos, I was really surprised to find so many that weren't done in the quality I expected, for one of the great celebrity icons of the 20th century.

This doesn't mean there weren't any good ones, just that I was surprised at how many bad ones there were. Usually you'll always find a few bad ones and the majority are done well. But in this case, it is much different; at least how I look at them.

Tell me in the comments whether you think they're as bad as I do as an overall Marilyn Monroe tattoo gallery.

I'll begin with the worst ones and then bring you some that were done better.

What's odd about this Marilyn Monroe tattoo is it had a lot of potential, but almost looks like a Doctor Jekyll and Mister Hyde look from one side of the face to the other.

To me it's like you really want to like it and find the quality in it, but then there's this thing that seems like she's young on one part, old down the middle, and seems to be snarling or even old in it.

It's like the tattoo is one step away from great but also just a short step from being sloppy. I think that's what makes me not like it: the contrasts being together.

Here's one that just doesn't capture anything of Monroe at all, maybe other than a little of the hair and partially one eye.

The mouth is plain strange, and the eyes look like they're from two different people.

This tattoo has difficulty even being believable as Marilyn Monroe. The only hint is partially the hair style, and her signature eye look, which resembles her a little.

It's possible the location of the tattoo was a problem, but I wouldn't have done it with how this turned out.

Is this tattoo really Marilyn Monroe?

On this one, don't ask me, as I don't get it. They have the date of her death and what looks like a bloody face. Is it supposed to be a zombie Marilyn. I don't know, but it sure is strange and ugly looking.

It's easy to miss, as in the heart is says 'camelot,' which is a reference to John F. Kennedy and the illusion of vigor and family life that had allegedly existed during his short term as president. Is the one wearing this saying this is what killed and made Marilyn what she was in the end? It could be.

This is really a strange tattoo, but in contrast to the others, this was an attempt to make her look this way, and from that point of view is a well done tattoo, although I know Marilyn Monroe fans won't appreciate it.

But the art aside, why would someone what this inked on their body?

I've never liked this version of Marilyn Monroe as a painting, and so obviously dislike it as a tattoo.

But as far as quality and looking similar to what is expected, it's not badly done if you like the style.

Here's another terrible Marilyn tattoo. I'm not kidding when I say I wasn't looking for these, and at first I didn't look close, and it was only later that I found out how bad they were when I enlarged them and saw them for what they are. This is terrible though.

This tattoo at least let's you know it's Marilyn Monroe, and it captures her beauty and likeness pretty good, although if you look at a real photo of her you can tell it's a little off, but I could live with this tattoo on me, and finally someone got one right.

A fantastic tattoo that unfortunately doesn't look like Marilyn Monroe

As my caption says, this is a fantastic tattoo, and extremely well done. The only problem is you couldn't guess that this was supposed to be Marilyn Monroe. But I guess if it isn't going to look like the model, if you're going to miss, this is a good way to do it.

I call this a nice image of Marilyn because the second you see it you know who it is and where it's from. Because the tattoo isn't at an angle to be able to clearly see her face, it's hard to tell the quality, but the overall tattoo looks really good.

Every time I think it can't get any worse, another tattoo comes along like the one below that continues to leave you scratching your head and wondering what the tattoo designer and artist were thinking.

This one just sucks, and that's about all I can think to say about it.

I like this one because it's a caricature that depicts and says exactly what it wants about Marilyn, while allowing you to know who she is.

The New York Yankee reference is to her husband at the time: Joe Dimaggio, who had married her for a time.

Maybe this tattoo artist looked at other Marilyn Monroe tattoos and decided to go this route. I actually do like it, and enjoy the way they left the openness, yet kept the unique features that remind you of the one and only Marilyn Monroe.

Like I mentioned at the beginning, I had no idea what to expect when searching out Marilyn Monroe tattoos, and really expected to find some great ones; and plenty of them.

But I probably searched harder for Marilyn Monroe tattoos than any other I ever have, and literally could only find the ones shown here. By that I mean there were many others, but the quality of them were even less than these.

For such a major celebrity who everyone knows, it was surprising to find tattoo artists unable to bring her out in a way that would have shown her beauty and strengths.

Of course other were doing their usual artist thing and creating shock stuff and other things. But for those attempting to make a good Marilyn Monroe tattoo, most failed miserably in my opinion. What do you think?