Pearl - Gemstone of the Moon

Benefits of Wearing Pearl - The Gemstone of Cancer

Pearl is the gemstone for the Zodiac Sign Cancer. This gem is associated with the Moon which is representation of the mind. The sub stones or substitute stones of Chandra are white coral, moonstone and milky agate. This gem is also referred to as 'Moti'.

Pearls are obtained from the Sea. Pearls are available in different shapes and colors. Pearl is the Queen of Gems and an emblem of purity, innocence. Pearl has a cooling effect on the wearer which is why it is advised to be worn by those who are hot tempered. Wearing pearl helps to keep anger and anxiety under control. It also brings wealth and happiness and stability in life. Pearls should be worn when your horoscope calculates your weakest planet as the Chandra or Moon. Pearl can also be worn if a person is mentally weak and exceedingly emotional or have uncontrollable anger or worries. This gem should also be worn by those who are pessimistic or under depression and brings a calming influence on the mind and increases feelings of love and compassion for other people. 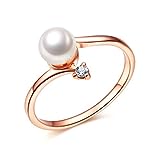 How to wear Pearl? One should wear a minimum of 4 carets as ring or pendant. It is more auspicious to wear 5, 7, or 9 carets or 109 beads pearl Mala. The Ornament should be made in silver and worn on a Monday before 10 AM after washing it in holy water and unboiled milk and after touching the pearl on the feet of Lord Shiva. On the day start off by invoking the blessings of Lord Ganesha and Lord Shiva. After that chant the Chandra mantra given below 108 times. The mantra used when wearing pearl is

It is advisable to recite the Chandra Mantra every Monday during the first hour from sunrise for 9 continuous Mondays to charge the Pearl. The maximum effects of wearing pearl lasts up to 2 years from the day of wearing it. However, Pearl or its substitutes should not be worn with Gemstones like Diamond, Emerald, Blue Sapphire, Cat's Eye and their substitutes.

One can buy or gift Pearls on occasions like Weddings, graduation, Valentine's Day, anniversaries etc as it is considered a very auspicious gift.