What Mr. Darcy Would Never Do

I am sure that dear Mr. Darcy would never do this. No, no. Jane Austen would faint if it was even rumored to be true. But a lot of Regency era gentlemen did - and knowing Miss Austen, I cannot help thinking that she would have been aware of this strange little secret of theirs.

I can remain silent no longer; the truth will out. For it seems that men in the 1820s had a harder time than you'd think. trying to keep up with the fashions. They did in the Regency period, too; this was the decade 1811-20, when the Prince Regent ruled Britain in place of his famously mad father, George III - and when Pride and Prejudice was published in 1813. Yes, men had as hard a time in terms of fashion discomfort as women in the Victorian era (which would not technically begin until Victoria became queen in 1837). That was the time when women were struggling, in various decades, with corsets, crinolines, bustles and enormous mutton chop sleeves. The men never had to deal with this sort of thing, did they?

Or - did they? Did you know that in the 1820s, the fashion-conscious dandy of the day wore corsets to help him fit into those trendy nipped-in coats. They did - and these items were not to be called corsets, oh no. You were supposed to call them belts or vests - even though they were whale boned, lace-up uncomfortable corsets. They were already being used by men in the military. This continued into the 1830s; according to Alison Carter in Underwear, the Fashion History (1992), men also used stays for strenuous exercise and when hunting - as a support for the muscles. But in many cases, the stays were simply a fashion statement.

With their corsets - yes, we are going to call it like it is, gentlemen - men in the 1820s wore linen shirts and floppy bow ties, small-waisted coats with big collars and capacious skirts. Trousers were similar to riding trousers, cut close to the leg and tight around the ankle. A top hat, some pointed shoes, curled hair and some fancy sideburns would finish off the picture.

In the same year as the ad above, 1823, in a magazine called The Emmet , a journalist wrote that:

The stays have passed from the ladies to the gentlemen, who bid fair to acquire as great slimness of make as their country-women. [Long ago]...no man contended with his fellow who should have the tighter waist, or who stand most heroically the discipline of the stays.

My sympathies, 1820s gentlemen. I had no idea that your everyday wear was as excruciating as a mid-Victorian lady's.

"Cassimere," of course, was cashmere, a soft wool derived from Cashmere goats, mostly associated nowadays with expensive, beautiful pullovers, coats and scarves. The word comes from the north Indian province of Kashmir, home to the goats that give the wool.

I found the second page of the Kelly & Hudson advertisement here - and what a lot of fabulous clothes they had for sale back in 1823! Gloves, "vestings" of all kinds, new and improved suspenders, Russian and Paris belts - enough, in fact, for several more future Hubs... 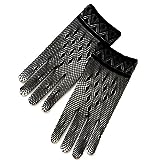