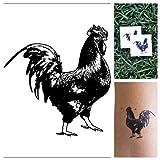 It was a lot of fun doing some searches for chicken tattoos, as it's a light and winsome category (for the most part) and projects the enjoyment and love of chickens people have.

With few exceptions, most of the chickens were done as cartoon characters rather than having them inked on to look real.

All of that ended up with a lot of fun with the subject matter, along with the inclusion of other barnyard friends in the mix.

Since I've had a lot of experience with small farming, including animals, I can definitely relate to these unusual critters, which always have some individuals among them that seem to want to act like they're human, or at least appear to have some of those traits we related to people we know.

So here's a mixed bag of interesting chicken tattoos you should really enjoy.

This was one of the few chicken tattoos that were designed to look like the real thing. The way the young woman is looking at it, it implies it may have been some special chicken from her youth. Many people do get inked from animals that meant something to them after they have passed on.

When it comes to inking something humorous on your body, there are times when less is more, and I think that's the case with the tattoo on the woman's shoulder below. To me the simplicity of the tattoo adds to the enjoyment of the image. For some reason I really like this one.

I'm clueless as to the why of combining a gorilla head with a chicken body to create a tattoo design, but it definitely captures your attention. Wild.

One thing I do like about it, from the design standpoint, is the nice way the artist made the lines, swirls and circles.

What a wild idea to create a tattoo of a chicken just getting its head lopped of. The look of the face is great, and that band-aide is hilarious. After all, what good will it do after losing one's head. 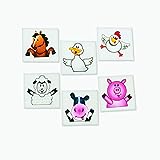 Here was a surprising tattoo find for me. Who would have thought you would find a rubber chicken tattoo. The artist designed it great. It does generate the question of why. But tattoo designs are that way, and always have some type of reasoning behind them. Most of the time only the bearer of the tattoo knows the overall story.

When you see these combinations of barnyard animals, it's almost certain the one inked with it had some type of history with these unusual and at times, contrary animals. Seeing them all together reminds me of their different dispositions and the funny situations they could get into: together and apart.

There are a wide variety of chickens, with some being raised for eggs, others for meat, and still others for show. Of course some are just there to be part of our experience and enjoyment. It looks like those are show variety.

These two below are fantastic in design and color. Great artwork by the creator.

Here's another instance where I'm not exactly sure what's behind the particular chicken tattoo. The container makes it look like it came out of a Kentucky Fried Chicken restaurant.

But the bone coming out of the bottom of the head, and the head itself, creates some uncertainty for me. Either way, it's a funny tattoo that will generate some discussion among those wondering similar things I am.

From a whimsical and light standpoint, this is one of the more enjoyable tattoo themes I've looked at in some time. There are times we need to take a break from the stress and darkness in the world and smell the roses. This set of chicken tattoos has done it for me.