How To Get Radiant, Glowing, Beautiful Skin In Seconds - Make Skin Glow

How To Get Radiant, Glowing Skin Instantly

Beautiful skin isn't hard to obtain or maintain for that matter, a simple daily beauty routine and healthy diet will take care of that. But how do you get that extra special radiance that you see on celebrity red carpets?

It's simple. You cheat.

By cheating I mean that you don't have to be as fresh as a daisy to look like one. There's a great make up product that will give you that radiant glowing skin with minimal effort, it's called a highlighter.

If you're already aware of the benefits of highlighters, then you probably won't get much from this hub, but if you're new to using highlighters, or haven't heard of them before, you may find some handy tips below.

I discovered highlighters about 5 years ago when I was working with a band. They had been on a photo shoot and when they got back I noticed something really different about a girl member. Her skin looked amazing, it had that exact radiance and glow that you see on the likes of Paris Hilton and Jennifer Lopez.

I later found out that a make up artist had used a highlighter on her and this was how she got the glow. A few days later I bought the very same highlighter and wow! It made so much difference instantly. Sometimes if I'm in a hurry I don't use a highlighter, just foundation, and on those days I feel as though I look washed out. The only warning about highlighters I need to give is that once you start wearing them, you won't want to stop. They really do make the skin look super beautiful, radiant and younger. 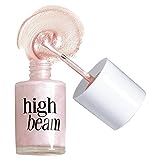 The particular highlighter that I use is made by Benefit and is called Moon Beam. It's an iridescent apricot colored liquid and it gives the most fabulous radiance to my very pale skin. Benefit have a sister product called High Beam, the difference being that instead of apricot, it's pink and has more of a glitter effect than Moon Beam which is more shimmery.

Some people say that which one you choose is down to skin tone, but I disagree. I have tried both, but I chose Moon Beam because I liked the effect more. Both worked on my very pale skin and Benefit say that both work on all skin tones, it just depends on which you prefer.

These products are so easy to use thanks to the simple but great packaging which is just like a bottle of nail polish, with the brush attached to the lid.

A quick sweep of the brush on the cheekbones and browbones and then blend with your fingers in small circular motions. I like to take the highlighter on my cheeks up to my temples, with the remaining liquid on my fingers I dot the inner corner of my eye beside my nose.

If you have great skin you can use highlighters on their own, without foundation for a dewy look. If you want a subtle glow, use the highlighter under foundation, for a more striking look, use it on top of foundation.

The thing to remember is to blend well. You don't want to look like Adam Ant with stripes across your face! It's not hard to do though, you just have to keep going in small circular motions until all the highlighter is evenly blended. It should only take a minute or so. the only reason why a liquid highlighter may not blend properly is if your skin is dry. Make sure that you moisturize your face before using it if it is.

A small tip! If you're using just highlighter and not foundation, mix it with some moisturizer and apply together. That way it's quicker than applying both separately and you'll be sure to have moist skin for even blending. 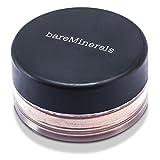 A few years ago I switched over to mineral make up. I liked the effect at first, but I have grown increasingly bothered by the way it looks and feels on my skin. Although trying to use a minimal amount, I have to keep adding and adding because I can't get the coverage that I want. I end up feeling like I've got way too much make up on both from how it feels and how it looks.

During this time I used a Bare Minerals product called Pure Radiance. It gives an apricot dewy glow to the skin and I liked the effect it gave, but due to the Bare Minerals foundation feeling to heavy on the skin I never really got on with it.

If you use mineral make up then you'll probably like this product a lot. It isn't really a highlighter as such, but it does give a dewy glow to the skin that has a similar, but much less apparent radiance that what I'm use to.

I've spent years dabbling with all different kind of make up, and essentially, what works for me may not work for you and vice versa. I liked the idea of using mineral make up and I did try with it for a few years, but now and then I always found myself going back to my old foundation.

One of the things to consider when buying a highlighter is what kind of foundation do you use? I tried to use my Moon Bean highlighter with Bare Minerals foundation and it didn't have the same effect. I did try with the Pure Radiance, but I couldn't replicate that stunning glow that I get from Moon Beam.

I'm back using my old foundation - Clinque Soft Finish Makeup in Soft Bisque. If you know this particular shade, yes, I'm that pale! - and I couldn't be happier with the results. My skin looks radiant and glowing thanks to Benefit's Moon Beam and I'll be firmly sticking with it this time!

Give a highlighter a go, you'll be amazed at how fast you too can have radiant skin that glows with health!

Other Beauty Hubs By Moonbun