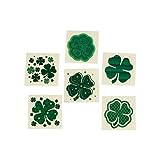 The shamrock is part of Irish and/or Celtic culture, and is expressed in a variety of ways for those seeking to showcase that as a tattoo.

Interestingly, because people confuse the four-leaf clover with the three-leaf shamrock, the majority of those tattoos are expressed as four leaves.

This probably comes from the idea of the luck of the Irish and the luck associated with the four-leaf clover. It appears there is a connection made in that regard which causes the confusion.

Speaking of the shamrock and confusion, even the experts have difficulty with identifying the shamrock as a species. James Armitage, of the Royal Horticultural Society, noted, "The shamrock is known from artwork and not from an exact botanical representation, so to fix a species to it is quite difficult."

Of course if most people aren't sure, it really doesn't matter, as it is understood what is trying to be conveyed, and for tattoos, that's what really matters.

So in the following tattoo images there will be shamrocks and four-leaf clovers that have been identified as both by the bearer.

We'll start off with what is considered the real shamrock, a three-leafed image of the plant. I like this one with the knot and black background.

Here's another dark "shamrock" tattoo. These darker colors are very vivid and stand out nicely. The light colors within the leaves make a great design.

This is another version of a shamrock knot tattoo, a completely different design from the first one above. The separation of the leaves in a stenciled fashion is a nice touch.

The tattoo below was attractive to me because of the way the lines were designed. I like the swirling look and feel, as well as the impression there was no beginning or end to it.

I've never understood why someone would get a tattoo on the inner lip, as it's hidden from view, and as you can see below, you look a little weird when you decide to show it. I guess it's for the purpose of attracting attention by using it as a conversation piece.

The neck is a favorite place to showcase shamrock tattoos, and below are three with very distinct looks. The top and bottom tattoos include a tribal look, while the one in the middle what is considered a more traditional shamrock image.

Remember, shamrocks are identified more from the artwork surrounding them than from species identification.

This is my favorite shamrock tattoo of those in this article. I'm not sure exactly why it is I like it so much, but it's the design itself and the way the colors stand out. It's the only one I have seen with that unique shape.

Here is another different style of shamrock tattoo. If you look closely you'll see the halo at the top, but sitting on the edge of what appears to be the devil's tail set between his horns.

It seems to be saying as you walk through life there are always choices to make concerning good and evil. That's just my guess though.

As with all compelling tattoo themes, it includes subject matter which can be creatively designed to stand on its own, or interact with other themes. That's true with shamrock tattoos as well, as you can see from the wide variety shown above.

I still find it amazing how a simple little thing like a shamrock can be taken and turned into a variety of images.