Money being the method of transaction in most situations, it was exciting to discover tremendous creativity in the various tattoo designs of U.S. currency and money symbols.

What was particularly compelling was the creation of other themes using paper money, such as a rose and a boat, as you'll see below.

There is also a very cool image of the dollar sign tattoo using other elements to create the look.

The back of U.S. currency also has some interesting features, and the tattoo design of the pyramid looks great.

With the shape of the U.S. dollar being rectangular and flexible, it allows for a variety of designs which also add flexibility to the mix.

As for placement, the vast majority I found were on the arm, shoulder or hand. 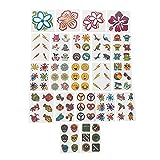 This dollar tattoo on the shoulder is the weakest of those included in this article, but I thought I'd include it more for how it would look being placed there to see how it can wrap around the shoulder.

I like how the bill flows across the lower part of the forearm in this tattoo design. It works good with the ancillary aspects of the tattoo surrounding it as well. The colors are vivid and stand out.

The tattoo below of the hand holding the money catches your attention if nothing else. How about a "fist full of dollars?" It is definitely an odd combination of horror money. The bluish tint on the fingernails adds to the overall theme.

The dollar sign tattoo on the palm of the hand is one of simplicity, but the placement is what would make this work for me. All I can think of if "ouch" when contemplating the sensitive area it's in.

This was a fascinatingly creative dollar sign tattoo design , with the knives going through the snake forming the image. It appears the bearer or designer of the tattoo (maybe both) was saying something about the pursuit of money.

Either way, this is a tattoo that captures your attention and looks great.

The pyramid on the back of U.S. currency has always captured the imagination of conspiracy theorists, who believe it has secret connotations. Be that as it may, it's still a terrific image, and one that looks fantastic as a tattoo, as you can see.

I really like the contrasting shading and strong lines and dark colors. Nice tattoo.

You have to take a close look at the tattoo below to see the boat shape. But if you ever took paper when you were younger and attempted to forge it into a boat, you'll see what the designer was doing. Pretty cool.

The use of paper money to create the image of this rose tattoo is fantastic. I don't know if there is any significance to the imagery, but the tattoo itself is awesome. The light-colored flow around the edge really helps it stand out.

Who would have thought the simple paper currency or money symbols of the United States could be used in such unique ways for tattoo designs. They go from a somewhat staid theme to a compelling image many people would like to have tattooed on their bodies.