The Google LG Nexus 4 smartphone has finally become available to the masses and Google is selling them like hotcakes. The phone is reasonably priced for the features it carries, specs which compete with high-end phones like the iPhone 5 and the Samsung Galaxy III.

For zippy performance, the phone can't be beat in the current market. Due to its quad-core processor (ARMv7) and 1.87 GB of available RAM (once you get past the system files), this phone zips through applications with no discernible lag as seen with lower-end Android cell phones that have less memory and slower processors. Some of the speed is no doubt due to the unfettered, raw Android OS.

Below, I discuss features and specifications of this phone, including the camera and Google Now, which is available on the latest Android 4.1 to 4.2.2. There is a video, a survey and concluding remarks concerning purchase decisions for these type of cell phones.

I have previously posted examples of Nexus 4 photos and an analysis of the capabilities of the camera. Overall, I would give the phone's camera a high grade for photo quality and ease of use. Major adjustments, like the control of the flash, HDR, light source and diopter adjustment, are right on the screen and thus quick to adjust. And you can do time-lapse video. But, there are better cameras on smartphones out there, as mentioned below in the video and the Amazon section that features competing smartphones above.

Sam Pullen on the Relative Camera Quality of the Nexus 4

Google Now is on phones with Android 4.1 or greater. It is a convenient way to check on the weather, see sports scores, check on transit information, etc. With verbal commands, you can send brief messages automatically (Send message to), do web searches, make reminders by setting an alarm (Remind me to ____ in ___ minutes or hours), taking notes (Note to self......) and do a large number of calculations and conversions.

To use Google Now to get directions, turn on the location access in the settings. Then you can ask directions to wherever you want. It even works in my location in a town in northwest Costa Rica. Although, not all locations are fixed in Google Maps in this country, as would be expected.

However, I have noticed that you can't change phone settings with Google Now as I read in recent Android Headlines article. Specifically, I cannot use the commands Turn off WiFi and Turn on Silent Mode. It answers, "Device features are not yet supported." Perhaps that will happen in future releases of Android. Key Lime Pie is due to be released soon, so we will soon find out. 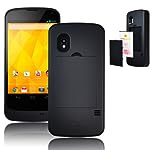 Despite having a fairly hefty 2100 mA battery, this phone can disappoint some. Going a full day with moderate to frequent use will require plugging it in again to a power source to keep it going. I have bought a car charger to keep it charged while I am out roaming around, and when in the house I keep it plugged in to power most of the time. So, keep a charging cable around wherever you go. You may also may want to invest in an external battery pack when you are out for an extended period away from a charging source.

Other options are to employ battery-saving programs or buy a Zero-Lemon Battery Case as shown to the right from Amazon. The battery case adds another 2250 mAh battery to the phone, effectively doubling its useful life between charges.

Which Android mobile phone are you most likely to buy?

The Nexus 4 comes with either 8 or 16 GB of storage. So, if you have a large music library or if you want to load a few videos, space becomes limiting. But there is a solution! All Google LG Nexus 4 users are entitled to a 50 GB cloud storage account with BOX. I just signed up for it and and can confirm that this is true. So, Nexus 4 owners this is quite a gift!

After you have set up your account, you can load your music files and/or video into your account and use various cloud players to stream the content onto your smartphone. For music, I use Cloud Around which can buffer in 20 songs or more at a time onto your device. I haven't done video yet, but I will look into that later and recommend a program that works well.

Reasons to Buy the Nexus 4

If you have an older phone, have a moderate budget and wish to buy an unlocked phone with phenomenal performance, I would recommend buying the LG Nexus 4. It has a good battery life, has great screen resolution that makes watching videos a pleasure and it has the Google Now program which can save you time sending emails, doing searches, making alarms, sending text messages and taking notes, etc. It is priced at about $300 too $400 less than competing phones that are the "phones of the day."

However, I would be remiss if I didn't say that you can't go wrong buying a Galaxy SIII, which is now priced at about the same level. You will get a phone with more memory capacity and a better camera. But for now, I am happy enough with the more sturdy build quality of the LG Nexus 4. Its camera is great compared to most phones and its performance with the quad-core processor doesn't leave me hanging.