High Price of Ink and Saving with BigCrumbs

My Old But Good Printer

Insanity of the HIgh Price of Ink

Watching TV, a comedian was saying that he just bought a new printer for $46 and then paid $76 for the ink. I found this amusing and ironic since I was expecting two shipments of ink cartridges anytime soon.

Why has ink gotten so expensive to replace? What type of profit does the manufacturer get back on this? It has been told that the companies are taking a loss with the selling price of printers. Some say that they sell printers at cost. Their intention is to make the money back every time you buy ink. It is very much the principal of buying the razor, then paying the high price for replacement blades. But how much should they really charge for ink? Haven’t they gone overboard on this?

To make matters worst, a printer that you bought last year will be hard to find in the stores this year. Not to mention the ink for an older printer. I have a Lexmark Z32 printer which I have had for seven or eight years. Funny it really doesn’t seem that long. In the past, I have always had one extra black and colored cartridge. I didn’t this time around. My printer doesn’t always show when the ink is low. Until a week ago...when printing a document, nothing showed up. Not even a light background of letters. Funny how everything printed out week before that.

I search all the stores in my hometown. Best Buy had the black ink only and it was priced for $36.99. They no longer carried the colored. Office Depot said they had both, but no longer could be bought as a pair. The black was priced for $37.99 and the colored for $42.99. For the two I would have had to pay $80.98 plus tax. For ink!!! Is this insane?

Ways to Save on Printer Ink

At Walgreens, I could get the ink refilled, which would have been $12.99 each. That’s livable right? I brought the cartridges in, but they both failed the test and were not usable. This has happened four separate times. Though each time, I have received a ticket for 10 free photos for each ink cartridge for my trouble. I’m not blaming anyone; obviously refilling works for others who bring theirs in. Otherwise Walgreens wouldn’t be doing this. This brought me back to my dilemma.

There was no way I was going to pay over $80 for ink at Office Depot. The only answer was the internet. After looking around comparing prices, I went to BigCrumbs to see what online ink stores were listed. Checking through the list, I found that eBay had the best deal. I signed on to eBay through my BigCrumbs account. This way whatever I bought on eBay I would get money back from my purchase (20% for Crumbearners and 36% for Crumbsavers.)

I ended up paying $16.99 for two colored cartridges and $27.99 for two black and free shipping on both. Total came to $44.98. Plus an additional savings with cash back from BigCrumbs.

The same four ink cartridges at Office Depot, it would have come to $161.96 plus tax. What do you think? Did I get a good deal?

(Funny thing about eBay is that I have been a member for several years, but turned down for an affiliate ID to be able to put eBay on HubPages.com) 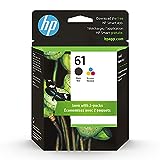 The copyright to this article is owned by Sandy Mertens (sandyspider). Content is original and may not be used without permission from Sandyspider. (S. Mertens)