It makes me feel old, but the ZX Spectrum celebrates it's 35th birthday in the spring of 2017.

I got my good old Speccy in the summer of '84 and used it faithfully for the following seven years.

I still keep up my Spectrum gaming today through emulators and the real hardware (there are still thousands of original units being used today) and re-play many favourite games as well as discover titles that I missed first time around.

This is a machine that introduced many people to home computer use, programming and gaming.

The influence of the ZX Spectrum can not be underestimated and this is a machine that is still as popular as ever today.

Here is a little tribute to celebrate 35 years with the greatest ever 8-bit machine....

The ZX Spectrum Was An Almost Instant Hit

With the success of machines such as the ZX80 and ZX81 the notion of the 'home computer' was creeping into the psyche of the British public.

When the Speccy arrived we were blown away by bright colours, fast moving sprites and simple music and sound effects!

For fans of Sinclair machines this machine was a real step up in quality and seemed and almost mystical piece of kit.

It had one other major factor going for it too; the price.

Home computing with 'amazing' technology was now available to the masses.

From this point on Sir Clive Sinclair's machine was a sure fire winner.

The ZX Spectrum Came Bundled With The Horizons Cassette 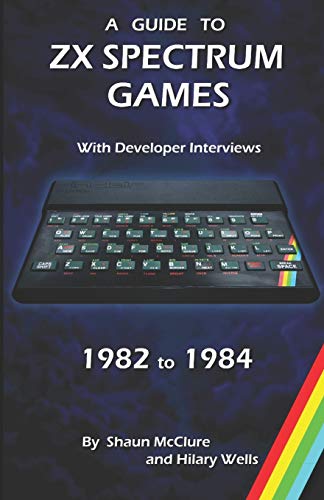 A New Horizon With The ZX Spectrum

As you un-boxed your brand new computer and hooked it up to the TV and portable cassette player.

As you finally got your computer 'tuned in' via the UHF connection the following was displayed at the bottom of the screen:

A whole new world was open to you.

You could immediately write a program in BASIC or you could load up your new cassette.

As the weird beeps and screeches hit you along with the multi-coloured border lines you weren't even sure if the thing was working correctly!

Your fears were soon washed away as the Psion 'ringed planet' logo magically appeared line by line on your TV screen.

As the first 'game' on the cassette loaded your were blown away by the colourful graphics in the breakout style game Thro' The Wall.

You just knew that you were tapping into something new, something exciting and a whole new part of life...

Horizons Loads Up On The ZX Spectrum

Thro' The Wall on the ZX Spectrum

Computing Back Then With The ZX Spectrum

You know I can still remember that first day as I opened up this magical box and took the machine out of it's polystyrene casing.

I can remember hooking everything together - and my parents even let me plug it into the colour television in the living room. (Although looking back I think they were just as intrigued as I was!)

I remember sitting cross legged on the floor, typing in LOAD"" for the first time and waiting patiently for Thro' The Wall to appear on the TV screen.

I swear we all sat there till about 2:00 am - with me playing the game and my parents watching in awe.

I'm pretty sure my dad had a go at Thro' The Wall too - he wasn't bad at it either!

Of course first thing the following morning I was straight back on the Speccy before breakfast - and the computer was moved into my room and hooked up to an ancient black and white portable that was probably celebrating IT'S OWN 35th anniversary then!

From that day on I was hooked, and I used the machine to learn programming as well as hone my fine gaming skills!

It really was a magical time and I will always be grateful to the little black box from Sinclair.

Here are a selection of great gaming moments on the ZX Spectrum.