Why I'm making this page about the banjo:

Why am I making this page about the banjo, especially since there is already a really great page made about the banjo? The answer is that I'm using a different approach to the subject. Instead of focusing on the history (although I might refer to it briefly) of the banjo, I simply want to explain why I like to listen to it, and to explore the several different types of music for which the banjo is known.

The unique sound of the banjo:

The banjo has a clear crisp sound, more clear and crisp than the guitar, Take a listen to some of the videos below to see what I mean.

Get this great banjo album:

Give Me the Banjo
Buy Now

Minstrels and the banjo:

In his article, "Thumbnail History of the Banjo," Bill Reese points out that Before the American Revolution, white men began using blackface as a comic gimmick . The banjo became a prop for these entertainers, either individually or in groups. See the entire article.

The complete History of the Banjo

Listen to Bill Evans tell the history of the banjo in 14 minutes:

The banjo can be used for several different types of music. Ever since the 60's it has primarily been used in folk music and bluegrass, although, previously, it was used by minstrels and by some barbershop quartets up to the 1920s (See the history link above.).

Barbershop and the banjo:

HAPPY DAYS! BARBERSHOP AND BANJO
side 1 - With Plenty of Money and You, Goofus, They Didn't Believe Me, Crusing Down the River, As Time Goes By, Walkin' with My Honey side 2 - Inka Dinka Doo, True Love, Fit as a Fiddle, Bye Bye Blackbird, Why Do I Love You, Happy Days are Here Again
Buy Now

For more on Barbershop music, check out this hub:

The Banjo in folk and Bluegrass music:

From the 60's on, the banjo has been used primarily for folk and bluegrass music. The banjo's use in folk music actually began in the 40's with Pete Seeger and the group he helped to found, "The Almanac Singers. For more on them, and other folk groups which used the banjo, check out thie hubs listed below::

If you can only get one banjo album, maybe it should be this one:

Check out the album listed below, which although pegged as "Bluegrass" has a lot of folk songs and some country and western as well. 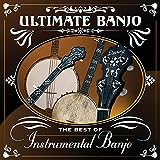 Ultimate Banjo: The Best Of Instrumental Banjo
The Amazon description pegs this album as "bluegrass," but from the song list, I'd say it includes folk, county, western and gospel as well as traditional bluegrass songs. Perhaps the designation of "bluegrass" refers to the style.
Buy Now

The New Christy Minstrels even had a song just about the banjo.

Check it out! It's kind of neat even though the broken banjo don't sound too great, Take a listen and if you like it, click to buy it.

So you'd like to play old time banjo music?

Now that banjo music is becoming more and more popular, I'm sure you will be able to find quite a bit of sheet music for banjo, but to give you a start, here's one book of banjo music:

So you'd like to play old time banjo music?

The How and the Tao of Old Time Banjo
Buy Now