The Best Tough Cameras This Year

Each year, the number of tough cameras on the market increases and the features offered on these models gets even more impressive. In 2013, the top rugged cameras joining the market have higher resolution, quicker response time and more creative control than ever before. You'll be amazed with the features you can get in such a compact body.

Whether you're looking for a waterproof shockproof camera for outdoor adventures or fun around the family pool, there's a tough model designed to meet your needs. Here are some of the best rugged cameras for this year.

Tough cameras have a lot of features that you won't find in most compact point-and-shoots. Here are just a few reasons to love an action cam.

The Nikon Coolpix AW110 is the successor to the bestselling AW100, and it promises to be just as popular. The new Nikon waterproof camera has all the features that made the earlier model a winner, but is even better.

This compact rugged camera is now waterproof to 59 feet (compared to 33 feet for the AW100), shockproof to falls from 6.6 feet, freezeproof to 14 degrees Fahrenheit, dustproof, and able to shoot full HD video. The AW110 still offers GPS, but has now added another great feature for photographers on the go - built-in WiFi. With this new feature, you can control the camera from your smartphone or easily upload images from any hotspot. It's great for traveling!

Sony raised the bar on all rugged cameras in 2012 with the introduction of the TX200v. With an 18.2 MP CMOS sensor, the TX200v has the highest resolution currently offered in the "point and shoot" market. It also outclasses other rugged cameras with a 3.3-inch OLED screen and the ability to shoot bursts of 10 frames per second at a full 18.2 megapixels. Although a few other waterproof shockproof digital cameras can claim up to 10fps, none of them does it at such high resolution. Sony also promises "lightning-fast" AutoFocus speeds of approximately 0.13 seconds in daytime and 0.25 seconds in low-light situations.

In addition to the now-typical features of rugged cameras such as being waterproof, dustproof, and able to shoot HD video, Sony throws in some additional goodies, such as face recognition, smile detection, "Natural Flash," background defocus and more. The downside? Sony hasn't made it shockproof.

If you want to mount a camera on your bike, surfboard, helmet or other sports gear and go bouncing, speeding and jostling just about anywhere in the great outdoors, the GoPro Hero3 is designed for you. This is the best rugged camera for outdoor enthusiasts who care more about capturing great point-of-view photos and HD video while in motion than taking pretty panoramic images or portraits. There's no fiddling with complicated menus on this model - just turn it on and go! The GoPro Hero3 is extremely popular and comes three editions: Black, Silver and White. 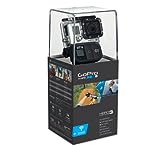 Good budget-priced waterproof cameras are hard to find. There are a few models on the market for under $100, but the low price is reflected in the low-quality photos. The new Nikon S31 is a nice compromise between price and quality. It's not going to take the same quality as their 16 MP Coolpix AW110, but the S31 is priced to appeal to families. And that's who Nikon is targeting, marketing the S31 as a camera that can be used by everyone, from young kids to great grandparents. It's waterproof and shockproof and comes with a host of fun features such as built-in filters, special effects, and in-camera slideshows. All these features make it the best Nikon for kids, but also a great choice for adults who want an inexpensive waterproof camera.

See One in Action! - What can you do with a GoPro HERO3? This video will show you

GoPro calls the GoPro HERO3 Black Edition the "most versatile camera in the world." Take a look at this video and see if you agree.

Other articles by lisadh

I love cameras and writing about photography. Here are some of my other articles you might enjoy.

New Waterproof Cameras 2012
Waterproof cameras have been around for decades, but it wasn't until 2005 that the first underwater digital camera hit the market. Now there are new models c...

4 Top Rugged Cameras 2012
Each year, the number of rugged cameras on the market increases and the features offered on these models gets even more impressive. In 2012, the top rugged c...

Refurbished Waterproof Camera
An underwater camera is a great way to capture photos at the beach, at the lake, at the swimming pool, or anywhere you worry about exposing your camera to th...

Waterproof Cameras With GPS
There are many reasons to select waterproof cameras with GPS. In addition to being able to geotag your photos, they're typically rugged cameras that can with...

GoPro Sample Videos and Underwater Video
What differentiates GoPro cameras from many of the other top rugged cameras on the market is its versatility. Like the others, the GoPro is a waterproof came...

Why Choose a Tough Camera?

Rugged cameras are usually waterproof, shockproof, freezeproof and dustproof. Some are even crushproof. That makes them perfect for travel and everyday use.

Have You Used Any of These Cameras? - Share your comments and reviews