The Greens of Strongsville is one of several attractive and thriving retail "power centers" (those substantially tenanted by larger medium- to big-box retailers that have the power to attract regional patronage) serving the Cleveland-area community of Strongsville, Ohio.

Situated on the northern flank of Royalton Road (State Route 82) about ¾ mile from Interstate 71, The Greens of Strongsville lies just several hundred yards west of the much larger regional mall of Westfield SouthPark, and just several hundred yards east of Strongsville’s primary intersection and town commons at Pearl Road. Both south and north along Pearl Road lie the community's traditional retail sprawl.

The Greens of Strongsville was originally developed and constructed in the early 2000s by the Cleveland-area real estate development firm of Wald & Fisher.m The center was later expanded in 2005. At its current size of 325,000 square feet, the property includes such national retailers as Target, Old Navy, Famous Footwear, TJMaxx, Starbucks, Payless ShoeSource, and Pier 1 Imports, as well as the strong regional foodstore Heinen’s. The project also includes a number of smaller local tenants, and terminates at a T. G. I. Friday’s restaurant along its primary frontage.

Identifying The Greens of Strongsville is its distinctive and eclectic composition of traditional Western Reserve architectural features — a warm palette of brick construction with light trims and fascias, gabled shingled roofs, broken pediments, shallow arches, brick gable-ends, and punctuation in the forms of dormers, cupolas and towers. The result is a satisfying ‘village-scape’ in tune with the citizens’ idealized perceptions of their community character. 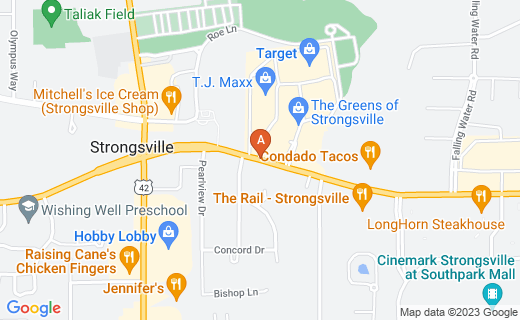 The Greens of Strongsville is also noteworthy for both its controlled building signage and its substantial decoratively landscaped entry feature and fountain, all designed by ZZ Design of Solon, OH. That entry marker incorporates the identities of the center and its key anchors into a massive brick fountain set into an orchestrated terrain of rolling lawns, landscaping and rockworks, thereby providing an attractive roadside amenity within its thriving commercial corridor.