Rick is a Cleveland-area architect who has written about (and created) local landmarks and architecture for decades.

Opened in 2004, Crocker Park in Westlake, Ohio, just a half-hour west of downtown Cleveland along Interstate 90, offers a contemporary lifestyle center with New Urbanism aspirations to residents of northeast Ohio. Along with its eclectic, picturesque and highly detailed architectural styling, the development sports brick-paved and cobbled walkways, fountains, lush plantings and both traditional and modern street amenities.

Over the past 15 years, Crocker Park has become a truly mixed-use development, as it has developed substantial office space (including the headquarters of American Greetings), condos, and apartments on several floors above most of its street level retail, as well as a cinema, parking garages, park areas and a growing eventual perimeter of both townhouses and traditional homes. New Urbanism features include its small block sizes, rectilinear street grid, relative compactness and density, low-speed streets with on-street parking, traffic roundabouts, ample pedestrian amenities, generous landscaping, and a concentrated variety of uses. In its design, particular attention was paid to customer-friendly details, such as appealing lighting, ample on-street seating, and a dog walk/play area.

A Central Roundabout in Crocker Park

Initially a 75-acre development, Crocker Park has since filled out and expanded to roughly 12 city blocks along the western flank of Crocker Road, at the heart of otherwise suburban Westlake. Eventual resident population is expected to reach 2,000 and more, as Crocker Park’s planned 1.7 million+ square feet are built out. Roughly half of the project’s total square footage is being dedicated to residential use, with retail tenancies accounting for just over 30% of the total, and Class A office space making up the remainder. Residential and office uses occupy upper floors of many structures, with retail, restaurants and entertainment uses occupying ground floor levels and free-standing structures. Parking is provided on-street, at grade, and in parking garages serving the development. 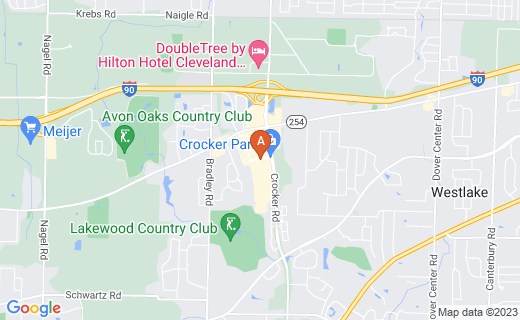 Cleveland-based Stark Enterprises has also developed several incarnations and successive phases of Eton on Chagrin in the suburb of Woodmere, Ohio, on the eastern reaches of Cleveland’s population density. (See my related article on Eton on Chagrin.) The firm's projects are noted for their eclectic architectural design, attention to detail, and fine-grained pedestrian amenities.

In concert with the eastern-suburb retail centers of Legacy Village in Lyndhurst, Ohio, and Beachwood Mall in Beachwood, Ohio, Eton on Chagrin provides much of the high-end draw to Cleveland’s eastern fringe, while Crocker Park (in tandem with Great Northern Mall in North Olmsted, Ohio) dominates the city’s western flank.