For a full forty-three years after its completion in 1915, this finely crafted 15-story 'high-rise' office building at the northwestern corner of Public Square served as the headquarters of The Cleveland Electric Illuminating Co.( or CEI, or, currently, The Illuminating Company), and was colloquially known as The Illuminating Building. The structure anchors one corner of Cleveland's 4-block 'front lawn' of Public Square, broad expanses of greenery punctuated with statuary and monuments to history.

Hubbell & Benes: Prominent Through the Region

Designed by the architectural firm of Hubbell & Benes, the narrow building mass sports an Italianate design, with a highly decorative and broadly overhanging cornice capping a strict columnar stylistic order of base, shaft and capital. Hubbell & Benes had a thriving practice in Cleveland from the late 1800s through the early 1900s. Their significant contributions to the city’s architectural heritage also included the YMCA Building (1908), The West Side Market (1912), Wade Park and The Cleveland Museum of Art (1916), and the Ohio Bell Telephone Building (1927). Both the West Side Market and The Cleveland Museum of Art continue to provide world-class amenities to the region's populace. 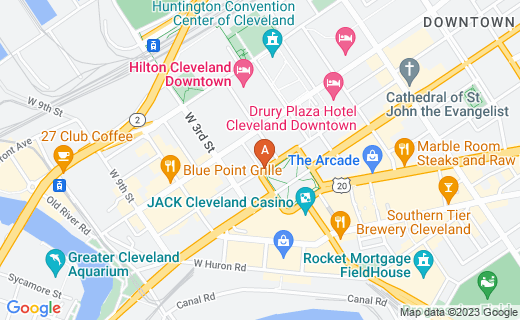 In 1958, the growing Illuminating Company moved less than a block westward, into its new namesake headquarters, a 22-story, 300-foot tall Modernist slab of glass and aluminum curtain-wall at 55 Public Square. Its former headquarters building still stands as a distinctive and handsome artifact of turn-of-the-Century Revival skyscraper design. 75 Public Square’s other historic neighbors along the northern flank of the Square include both Old Stone Church and the former Society for Savings Building (now restored and adapted as part of the Key Center complex, which also contains the soaring Key Tower and Marriott Key Center).