What began as pasturage for early settlers’ livestock has evolved into the City of Cleveland’s relaxing public ‘front lawn’.

Cleveland’s Public Square consists of four city blocks cross-haired by Ontario Street and Superior Avenue, situated less than a mile from the bank of the Cuyahoga River where city founder Moses Cleaveland and his surveying party alit in the summer of 1796. The area gridded out by that party was modeled on the typical town square of a contemporary New England town, for the surrounding region was all part of the former colony of Connecticut’s congressionally-mandated ‘Western Reserve’.

But the growing city quickly enclosed Public Square, and most of its significant buildings were arrayed about the quadrangle. The congregation of the historic Old Stone Church began as religious classes held in a log-cabin city hall that flanked the Square. The Church’s classic edifice (rebuilt several times over nearly 200 years) still towers over the greensward containing the statue of the city’s founder. By 1879, the teeming traffic about the Square demanded the world’s first electric streetlight, featuring arc lamps designed by native Clevelander Charles F. Brush.

Towering above the northern face of Public Square is Key Tower, part of Key Center and home of Key Bank. The 57-story Tower, designed by Cesar Pelli and completed in 1991, is the city’s tallest structure. Restored at the time of its construction was the historic Society for Savings Bank, a Richardsonian red stone fortress designed by Burnham & Root and completed in 1890.

Gazing out upon the eastern flank of Public Square, and upon the Soldiers and Sailors Monument of 1894 situated in the Square, stands the former BP America headquarters building (now simply 200 Public Square). Designed by Hellmuth, Obata & Kassabaum (now HOK), this 45-story stone and glass slab embodies an unusual flare-winged and stair-stepped geometry as it straddles from Superior to Euclid Avenues. Its 8-story atrium provides a grand interior landscape with pools, reflecting the landscaped Square outside.

Currently the city is considering a variety of fairly significant redesigns of Public Square, preserving it as a citizen’s front lawn, while investigating ways in which it can remain the central engine and focus of downtown development and city life. 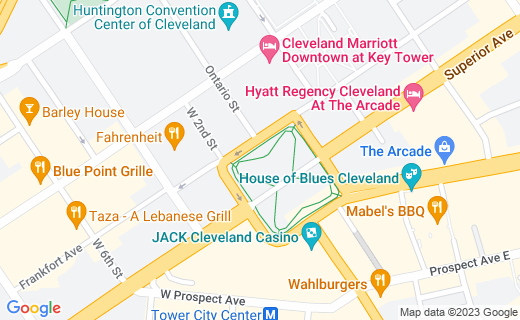