The Same City in Different States

The founders of eight cities in America named their communities after the man they thought at the time first discovered America: Christopher Columbus or Cristoforo Columbo in Italian and Cristóbal Colón in Spanish (per The Ohio State University Languages Departments). Other US cities were named Columbia or Colon, but Columbus is the name we will have fun examining here.

I recall one day in junior high school when I dialed 411 to learn a phone number I needed. When I answered the Operator's question about the name of the city, Columbus, she asked, "What state?" This surprised me - that other states had a city with the same name. I learned as much from the Operator that day as I did in geography class.

Some of these cities named Columbus also have been named to this prestigious and practical list of best places to live and work in 2014:

The Cities of Columbus, USA 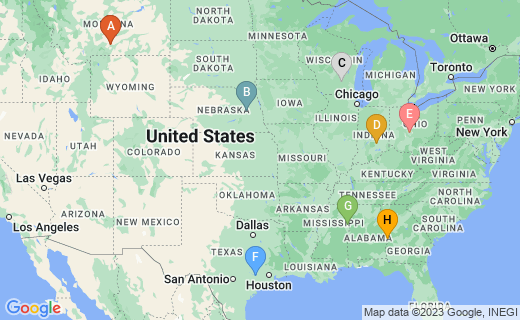 Columbus, Montana sits along the north shore of the Yellowstone River, between Old US Highway 10 and Interstate 90. With 1982 residents in 2014, the town is about 40 west of Billings, Montana, the largest city in the state.

This town is renowned for good fishing and as an entrance point to the Absaroka-Beartooth Mountains and Yellowstone National Park and it has its own Facebook page to announce events and attractions.

A fine place for recreation, camping, and hiking, it is not in the middle of nowhere, but has its own airport and railroad depot for passenger trains. It also supports casinos and an interesting museum. The Town Pump grocery, city parks, and a golf course are also big draws.

Jobs available here include many in dentistry and related work, truck driving, sales, and dining.

Billings, Montana Area Along I-90 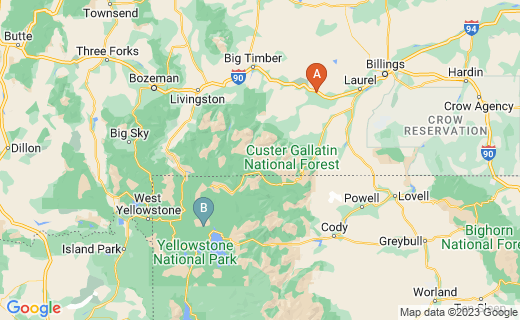 Nebraska makes me think of fields of crops and the outstanding film Nebraska that stars Bruce Dern and Will Forte.

The city is home to over 22,100 people and is built on a long history in North America along Platte and Loup Rivers. Native American groups have lived here for millennia. Today, many of them are protesting the extension of the Keystone XL tar sands pipeline, because of the record of tar sands elements creating a need for the Cancer Corridor of hospitals in Alberta. However, hydroelectric power is healthy in this area.

The American Railroads came through Columbus and eager promoters campaigned for this city to become the new capital of the USA, situation in the middles of a coast-to-coast rail line. Rail executives ended up fighting over lands and rights of way and Columbus did not become the capital of the US.

The trains followed old Native American footpaths and eventually, the famous Lincoln Highway or US Route 30 was paved along the same right of way.

Some other attractions include: 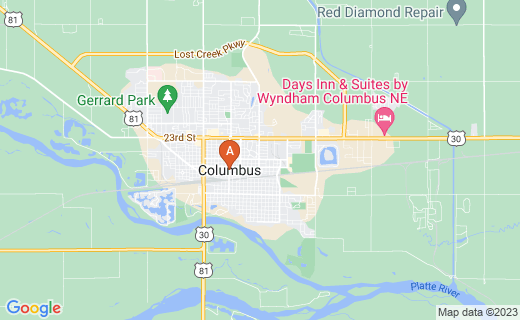 This Columbus is in south central Wisconsin, and home to about 5,000 residents on the Crawfish River. This is another city served by Amtrak rails, specifically the Empire Builder that connects Chicago and Seattle every day. While the namesake city in Ohio is much larger, it has no passenger rail service.

The community preserves about two dozen historic buildings and a Christopher Columbus Museum.

The museum is housed in an antique store that specializes in materials, some rare, from the 1893 Chicago World's Fair or Columbian Exposition in honor of the explorer. It can be found at 239 Whitney St., Columbus WI 53925 inside a store of about 80,000 square feet of antiques and memorabilia. This is like an amusement park for antique collectors. 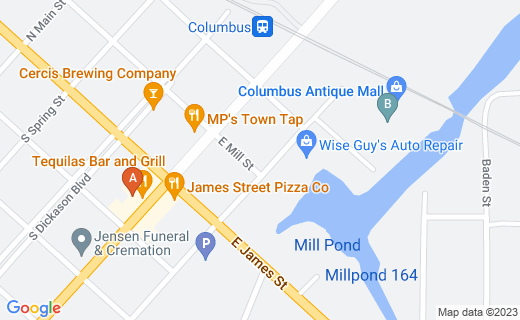 Indiana's city is south of Franklin, Indiana and is an extended suburb of Indianapolis. It is best known for its tours of city architecture and art galleries, as well as for national landmarks. Tours of county bridges are also popular.

Public art takes the form of memorials, Chihuly glass in dozens of places, and innovative bike racks. Public art is everywhere and the Cummins Corporation even has an Exploded Diesel Engine installation, "exploded" meaning installed in connecting pieces so the public can see them all, down to the smallest bolt.

Green spaces, shopping, a Scottish Festival, and microbreweries all make up only a fraction of the attractions in this Columbus.

The city's huge and ornate Zaharakos Ice Cream Parlor and Museum was highlighted in Midwest Magazine in 2014, when the shop was 114 years old. Some of its architecture and décor came from the St. Louis World's Fair of 1904 and the store features tiny tables and chairs for toddlers. Indianapolis Monthly says it is the state's Number One Attraction: downtown at 329 Washington Street, Columbus IN.

The museum is next door to the ice cream parlor and features a big collection of antique soda fountains and mechanized musical instruments. 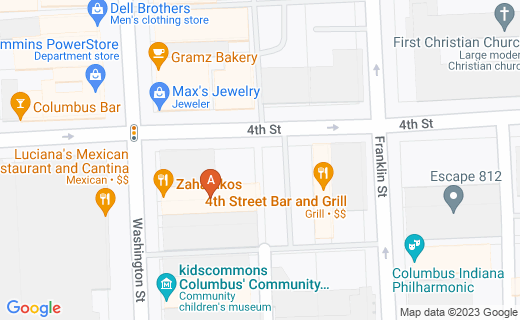 In 2014, Forbe's and Sperling's named Columbus, Ohio the Top Opportunity City in America. 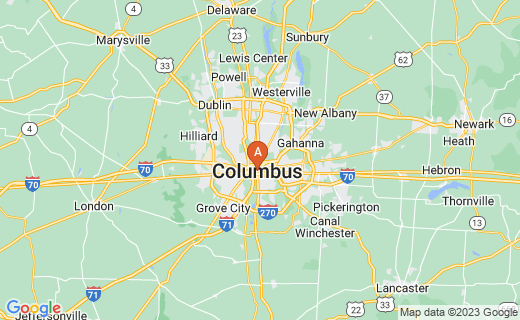 Columbus, Ohio was founded on February 14, 1812 expressly to become the new capital of the State of Ohio (founded in 1803) and formerly owned by the French as The Ohio Country.

The Rivers of Columbus

The Native North Americans of Ohio named the river along its southern border Big River, but the French renamed it Beautiful River in their own language: Belle Rivière and Belle Ohio ("Beautiful Big River"). Because of this double naming, the State Song is Beautiful Ohio and all our elementary school children learn it early in school.

Interestingly, one of my grandfathers was Native American and French.

The larger metro area has just been enlarged by two counties to include nine of them in Central Ohio, From Madison County in the west, all the way to Guernsey County in the east.

Columbus has its own two big rivers - the Olentangy and the Scioto, which meet downtown at the Scioto Mile. That mile is a solid development of parks and recreation areas all long that section of the rivers for which we thank Mayor Michael Coleman. The city has progressed under his term of office to a greater extent than ever before and we miss him as he steps down for other adventures in 2016.

Our state capital had a giant statue of Columbus standing at Columbus State Community College, but the Native American groups vigorously protested because of the explorer's maltreatment of the natives in the West Indies, and the statue was removed. Sent to several other cities around the world, no one seemed actually to want it. Rumors are that it is in storage.

Columbus, Ohio is at the northeast corner of the Ohio Space Corridor, which is active in producing aerospace components, spacecraft, space habitats, advancement in both Earth and Space Medicine, and several related items.

This Columbus is taking exploration far beyond the dreams of the explorer of the 1490s, with the help of Orville and Wilbur Wright and today's organizations that include Battelle Memorial Institute, Chemical Abstracts, Illumination Science, and Boeing ( in Heath, Ohio). Up until the 2000s, experimental air- and spacecraft were designed and tested by the Columbus division of North American Aviation (North American Rockwell from 1967 - 1996), which was absorbed by Boeing in 1996.

T-2C Buckeye, sent to US Naval Test Pilot School for all training through 2008.

Most of these cities are located on a river and this Columbus is on the Colorado River and superhighway I-10, along with US Route 90. A paddling tail is outlined by the city to take canoe paddlers through the area on a relaxing trip through smooth stretches, gentle rapids, and native plants, wildflowers, and views of wildlife.

This area is famous for national landmarks and its location amid the battles of war between Texas and Mexico. The Stafford Opera House is a historic building and the site of several special events during the year. Civil War Era mansions and log cabins make interesting sightseeing stops, as does the Santa Claus Museum.

A popular venue is the County Farmers Market that sets up in front of the County Courthouse in Columbus on Fridays from April through the Harvest Season. Related to this, the County Fair is held annually at the end of September.

In higher education, the Texas Bible Institute was founded here in 1990 by pastors with 30 successful years in church operation and expansion, providing training in Discipleship and Leadership in each of two semesters yearly. Information is available at info@texasbibleinstitute.org.

Additional nearby schools include: 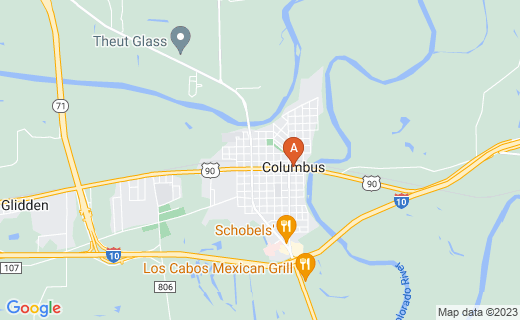 Located to the south of Tupelo, Elvis Presley's birthplace, this Columbus is a larger city than some of the others, at 23,000+ people in 2013. The US National Trust for Historic Preservation named it to a list of 2008 Dozen Distinctive Destinations for its ongoing landmark preservations. Its river is the Tombigbee River just to the south.

Visitors have increased yearly at the local Tennessee Williams Tribute and Home Tour. It runs for five days in mid-September and includes m,any other activities than the Victorian homes tours. Williams spent just a few years in this city, but it never forgot him.

The city has two motor speedways - Columbus and Magnolia Speedways.

The Blues trail runs through Columbus, with honor points for Big Joe Williams and Catfish Alley. Many African American historic landmarks are located in this area of town.

A Farmers Market is popular in this Mississippi city and a yearly Spring Pilgrimage tour through historic homes begins for two weeks annually in April about the time the market begins to operate each spring. The pilgrimage was in its 75th year in 2015, marking its beginning in 1940. Today, it is a massive event with food, music, a 5K run, carriage rides, at least four different tours, and many other special offerings.

Founded in Columbus in 1884, the Mississippi University for Women was the first public college for women to open in America.

Near the Eastern Border of Mississippi 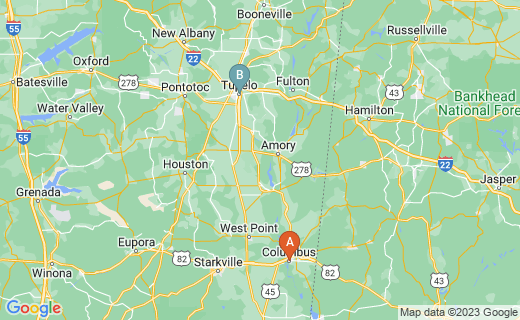 Columbus Georgia supports almost 203,000 people as of 2013 near the Fort Benning military base. to go along with that fact, the city maintains a Civil War Museum and the National Infantry Museum.

The city was voted in 2014 to the list of the Top 100 Best Places to Live by Livability Magazine. Earlier, America's Promise voted it among its 100 Best Communities for Young People.

Uptown Columbus has a fully developed urban whitewater rafting course that is the longest on the globe. In addition, the city has many kayaking and paddling clubs. The Uptown Area is a 47-block area supported by additional taxes from business owners for expansion and development of shopping, dining, apartment and condominium spaces, event spaces, and schools. A Farmers and Others Market presents the wares of over 150 local vendors.

The area includes higher education at:

Dozens of museums and art gallery installations include those sponsored by organizations like:

The City of Columbus grows in part because of the presence of the Fort Benning US Army Base and its many personnel. 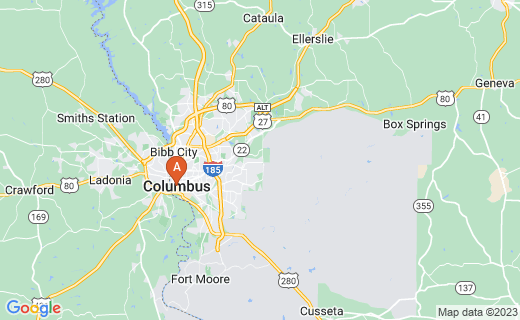 This military base supports at least 120,000 people and advertises jobs for military and civilian personnel. it is also a hub of US Army Basic Training classes for all Armor and Infantry personnel from private to colonel. The Fort Benning Maneuver Center of Excellence conducts research, development, and experimentation to this end.

During Winter 2015, Fort Benning had listed many openings for dentists and dental assistants, hygienists, physician specialists, IT specialists, truck drivers (increasing all over the USA), and food services and other services workers.

We are the Army’s leader in innovation as we support an Army at war and prepare for the future.