Attractions On the Superstition Freeway

Science fiction road trips make up a genre of literature that I have discovered recently and find fascinating. They are not quite On the Road by Jack Kerouac, but they are special. Some favorites of mine are Driving Mr. Albert (a road trip with Einstein's brain) and Heinlein's Glory Road. The roads through the Superstition Mountains of Arizona offer similar stories and legends.

A unique road trip is one taken on a highway whose construction started as a small section in 1971 (per the Arizona Department of Transportation). Substantial additional construction began in earnest in 1979 in Arizona, a state that, together with New Mexico and Nevada, have been witnesses to secret military operations, rumors of nuclear testing involving UFO landings and human experimentation, the Peralta Empire that included the false Baron of Arizona, and homelands of several Native American Nations with their rich cultures and customs.

Pima Nation legends may have been the source of the name "Superstition Mountains." The highway was constructed along 13 miles of land from 1971 - 1991 and nicknamed the Superstition Freeway portion of US 60, which is also called the Apache Trail in the towns along the way.

The Superstition Mountains must have 100 legends. Observers have claimed to see reptilian humanoids coming through other dimensions on alien space craft. Time travel is rumored in this area. The ghosts of gold miners are said to travel the area at night. 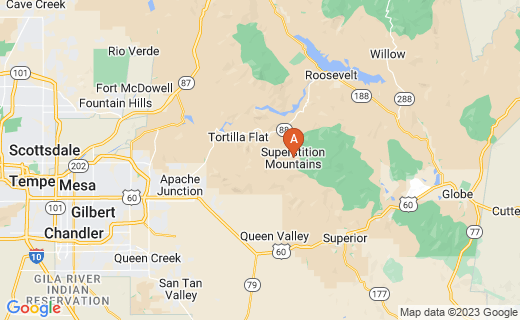 The Superstition Mountains cover at least 160,000 acres of land in the southern part of the Tonto National Forest. 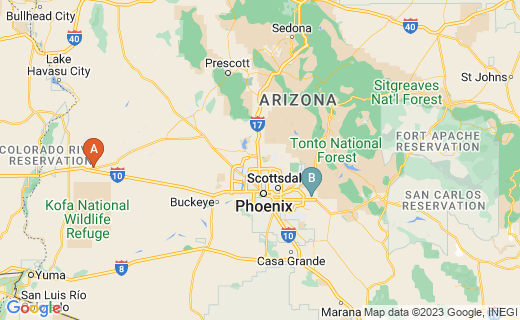 Some of the most memorable excursions travelers can make extend just beyond Apache Junction to several sites along the continuation of US 60 to the Fort Apache Historic Park and Reservation.

Towns and Attractions are Compelling

The color filled beauty of natural vistas in the Superstition Mountains is surrounded by the towns of Apache Junction, Globe, Gold Canyon, Miami, Queen Valley, Superior, and Tortilla Flat - the last town that was a stagecoach stop and survived into the 21st century.

Apache Junction is the most-visited town on the Superstition Freeway, providing a ghost town and dozens of other historical adventures and shows for tourists. The area just east of this town is equally compelling. See a list of several sites to enjoy below.

Once a gold mining hub, the mountains have become a tourist attraction for motorists in Arizona along US Highway 60, the portion of the highway around the mountains being developed into the Superstition Freeway. Legends of lost gold and lost miners of the 1800s add to the superstition part of the ambiance. 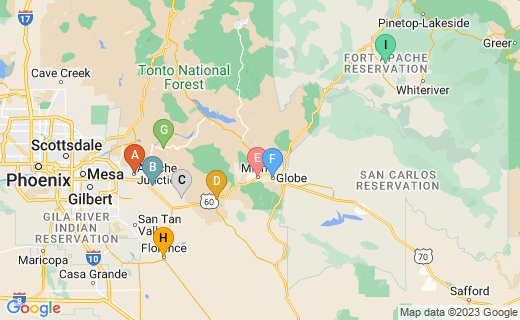 A Drive Along US 60, Tempe to Mesa

Dozens of places and activities beckon to travelers along the Superstition Freeway and this list contains some of the best. Many activities are available in Apache Junction.

Apache Trail Tours and Goldfield Ghost Town - This company offers gold panning experiences as well as a series of trail rides in 4 x 4 vehicles and other tours that take from 2 to 8 full hours to see interesting sights. This company is located by GPS at 4650 N. Mammoth Mine Rd-Apache Junction AZ 85119.

Apache Lake Marina and Resort - This is a large complex of activities at 20909 E Apache Trl Ste 6, Apache Junction AZ 85119

Dolly Steamboat trips on Canyon Lake - 2700 E Moon Vista St, Apache Junction AZ. Daylight and nighttime cruises are a favorite of tourists and locals. Visitors rate this attraction at 4.5 out of 5 stars on TripAdvisor.

Superstition Mountain Museum - 4087 N. Apache Trail, Apache Junction AZ 85119. This museum includes the history of the mining operations in the area, the Lost Dutchman Mine, the Elvis Memorial Chapel, and the Audie Murphy Barn. The latter two facilities were moved here after a fire destroyed their original building. Some of the last pieces of 1890s mining machines are on display outside this museum.

Superstition Wilderness - An entrance is located between Apache Junction and Globe, Arizona.

The World's Smallest Museum - Quaint, located at the Buckboard City Cafe, 1111 US 60 (Superstition Freeway), Superior AZ 85173. The museum contains some interesting items, like an early 1980s home computer and a letter from President John F. Kennedy after he was newly elected. The cafe offers some different foods - like a cheeseburger-bacon omelet.

The Superstition Restaurant & Saloon in Tortilla Flat, Arizona - The bar has saddles for stools and the restaurant as a unique menu. The place offers tasty chili, Sonoran style Mexican cuisine, prickly pear gelato, and many other adventurous dishes. A General Store offers many of the homemade food items for take-home, as well as official passes to drive into Tonto National Forest. You'll also find a small museum on site at 2909 East Apache Trail (Superstition Freeway, US 60) in Tortilla Flat.

Tonto National Forest - This majestic national treasure is 2.9 million acres of forests and mountains. The Tonto National Monument in the forest contains two interesting Salado Peoples' cliff dwellings - not all cliff dwellers were settled in New Mexico. The national forest is bordered by the Sonoran Desert and the Mogollon Rim. At least 200 species of wildlife live here, to to mention the Crested Saguaro Cactus. Directions: Headed east from Phoenix, travel State Highway 60 (Superstition Freeway) 75 miles to Globe/Miami (75 miles); turn left onto State Highway 188 and drive 25 miles to the entrance of the national monument.

Plants In the Tonto National Monument

Tonto National Monument - In 1907, President Theodore Roosevelt earmarked 640 acres in Arizona near the Superstition Mountains for recognition of the ruins of two Salado cliff dwellings sixty other archeological sites.

Western settlers felt that the richest gold mine in the world was the Dutchman Mine in Arizona. Mr. Jacob Waltz, the Dutchman, was the owner of the mine, but he told no one where it was located, dying in 1891 with his secret in tact. 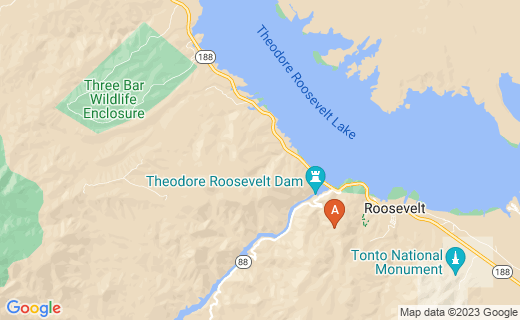 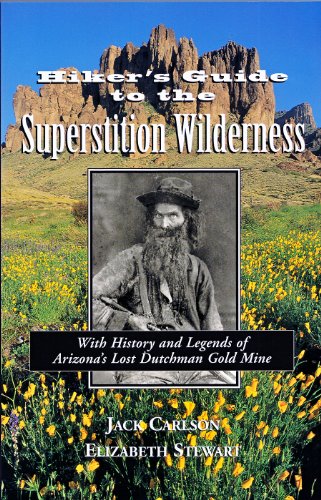 Superstition Wilderness trails are numerous, but two trails handle the bulk of human traffic through the forest. These are Peralta Trail, named after the fraudulent Baron of Arizona and his wife, and the First Water Trail.

Other parts of the forest, particularly those nearer the Superstition Freeway, offer additional hiking and riding trails.

The Hohokam and Salado people built many cliff dwellings in this area, and although summer heat can reach over 110 degrees F, the colorful buttes and mesas are spectacular to see. Camping is available and local native wildlife and Sonoran Desert compatible plants are interesting.

If you travel to the Superstition Mountains, you could spend a pleasant week-long vacation.

Native North Americans Along US 60

Native Americans can be traced in the region of Arizona to at least 7,000 BC and some archeologists feel that the first inhabitants may have appears at an even earlier date. The prominent nations in history living in this area include the Apache, Hohokam, and Salado peoples.

In came Spanish invaders to mine gold and create settlements, followed by trappers, cattlemen, and sheep ranchers. After the American Civil War, the US Cavalry established forts in the area, often including African American regiments of Buffalo Soldiers. who have their own national monument.

The White Mountain group is an officially recognized sovereign nation of Native Americans in Arizona. The reservation covers over 2.6 million square miles of Arizona land on the eastern portion of US Route 60 and east of the Tonto National Forest, south of Mogollon Rim.

Mountains cover this region, too, and the tallest is Baldy Peak. The tribe operates a successful ski resort, a timber company, a casino, and a cultural center for visitors. Several historic landmarks are contained in this region, including at least one US Cavalry Fort (Fort Apache), and several archeological sites, especially of the Pueblo Culture. Call the 24-Hour Information Line at (928) 338-4525

The Memorable People Along US 60

Western Portion of US 60, Parallel with I-10 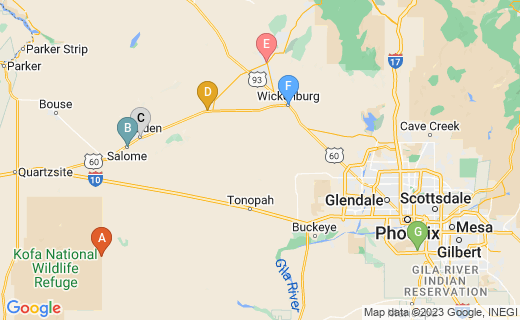 Moon Phoenix, Scottsdale & Sedona (Moon Handbooks)
US 60 and I-10 are highways that span the historical lands of Arizona that include the Greater Phoenix Area. This guidebook features details and images of desert areas, the diverse peoples that have lived here, and the large and small towns that have thrived - some turning to ghost towns. Lost gold, false barons, and Nartive American stories add to the legends of the Superstition Freeway.
Buy Now
Click thumbnail to view full-size 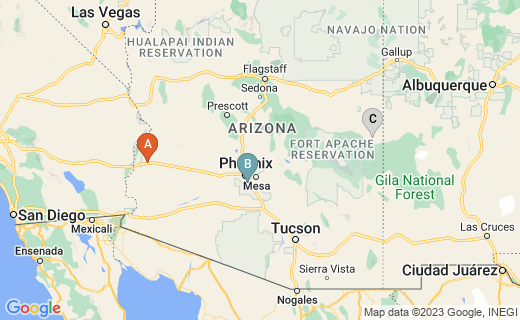