In 1973, the National Enquirer tabloid newspaper awarded a check for $10,000 to a crew of four airmen that flew over Tallahassee and filmed indisputable evidence of a UFO.

John Wallace Spencer described the 1973 UFO event in his 1974 book No Earthly Explanation: Mankind, A Space Experiment (Bantam Books). It was the evening of November 12 in 1973 that the DC9 crew heard something odd. They heard about a bogey from the air tower at Tallahassee. Within 30 minutes of that communication, other crew and officials at the air terminal saw the UFO.

Captain R.C. Cook was commanding the short flight from Tallahassee to Atlanta with three crewmen. They did not have enough fuel to follow or slow down and observe the bogey long-term, but their report was enough to earn them the $10K.

The UFO was traveling at the unimaginable speed of 2,200 mph at 3,000 feet altitude. This bogey was a sphere that glowed in light ranging from white to red and back again, although the crew saw some tinge of yellow and green from time to time in their observations. The Captain next heard from the Jacksonville airfield that they, too, had seen the bogey. Between Tyndall and Panama City, Florida air traffic controllers sighted two more of the same type of aircraft. Captain Cook's bogey followed his plane nearly to Atlanta from there.

If you are a UFO or space exploration enthusiast, or are seeking a career in aerospace operations or manufacturing, then Tallahassee might be the place for your next move. 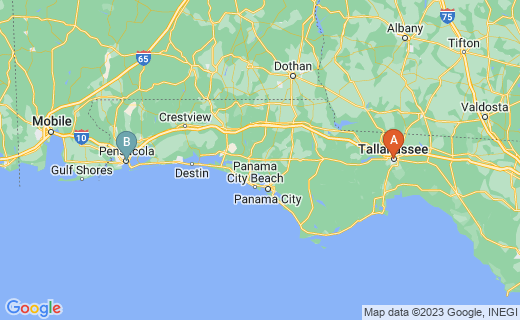 Tallahassee is set among rolling hills in the Florida Panhandle near what is called the Emerald Coast of Florida that includes Pensacola, one of my favorite places. The Gulf of Mexico is only 20 miles away from Tallahassee and the State of Georgia is just 12 miles in the opposite direction. Its county is Leon, named after Ponce de Leon in 1824. The Apalachee Nation lived here until the early 1500s without Euopean knowledge until the Spanish ventured into the area about 1528. The city proclaims that first Christmas on future American soil was celebrated in Tallahassee by Hernando de Soto in 1539. The natives called the place full of old fields. Tallahassee is a derivation of their words for such.

The Apalachicola National Forest, which you can see on the map above, is quite close and offers a variety of wildlife and native plants to observe. If you happen to be tired of Midwestern heat waves, the highs in Tallahassee range in average from about mid 60s to about 91, with lows in the 40s to about 71.

One other of the wonderful places to visit and relax here is Maclay Gardens State Park. Here, this area of the state shows off its trees: the Live Oak (often grows out over the roadway to make a shady canopy), the Flowering Dogwood, the Hawthorn, the Horsesugar, the Magnolia, and the Silverbelle.

Employment and Business to 2020

Aviation and Aerospace related occupations are listed in job postings in and around Tallahassee by the following companies:

In addition, Florida's Great Northwest organization points out that the Florida Panhandle is home to 16 military bases and over 70,000 individuals already employed in Aerospace and Defense. Research and dsevelopment and several support industries are increasing in production and employment as Aviation and Aerospace increase. Biometrics and robotics are only two examples. At least 250 companies in the panhandle related to aerospace are growing.

Federal grants have been awarded on the panhandle to further develop air parks, space ports, and related training facilities. One part of the industry that the public may forget is that commercial passengers themselves will require training to make any space flight.

A number of licensed Healthcare jobs are listed by the following employers:

Retail and Food Managers and Event Specialists are needed also by several companies.

Highest Demand Jobs In the Area

The City of Tallahassee city offers a menu of Senior Services to people ages 55 and older. These includes the following list and many others: