Travel and Top Jobs in The Dayton-Fairborn Aviation Heritage Area

The Dayton-Fairborn area, containing Wright Patterson Air Force Base and Wright State University, is the crucible of world aviation history. Aviation led to numerous aerospace and biomedical discoveries and inventions in the private and public sectors of this area. The links below showcase only part of this history.

This region is all about the Wright Brothers, Orville and Wilbur, and their aviation work as well as their famous friends and colleagues. In Dayton, Carillon Historical Parkhas developed around the Carillon Tower into a much visited collection of Wright memorabilia, exhibits, and archives, including the original 1905 Wright Flyer III.

With this final Wright vehicle, the US Army Air Corps gained the prototype for the first military airplane in 1909, before the Air Corps became the US Air Force. The National Museum of the US Air Force operates today with free admission to the public on Wright Patterson Air Force Base, named after the Wrights and the founder of National Cash Register (NCR) in Dayton.

The National Museum covers nearly 800,000 square feet in three exhibit halls, annexes, and program spaces, with additional outdoors exhibits and memorials, and another building of 200,000 square feet planned to house a retired US Space Shuttle in July 2011. It all started out on base as a corner display in an engine overhaul hanger in the 1950s, and in 1927, as a small display in Downtown Dayton. 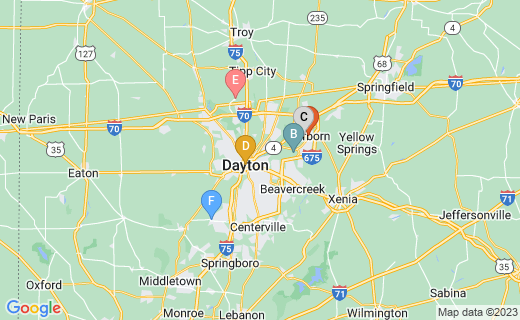 Wright State University, named for the Wright Brothers, is located in Fairborn, with a Dayton address. Its National Center for Medical Readiness began a project called the Calamityville™ Tactical Laboratory Project. It contains technologies for integrated studies and collaboration in training and research for training leadinf decision makers in mediine, public health, public safety, civilian disaster preparedness/response and military disaster response. nearing $4 million was awarded to this project in state and matching funds in 2009.

In the past, WSU has provided cutting edge research, methods, products, and appliances for treating spinal cord injuries and allowing paraplegics to walk with assistance. Additional medical and defense innovations are funded for the future.

The Dayton Flight Factory: The Wright Brothers & the Birth of Aviation
Buy Now

WPAFB - National Museum of the USAF

The Ohio Space Corridor (Columbus to Fairborn to Cincinnati) received official recognition and status from Governor Ted Strickland during Spring 2010, with dedicated government funding provided for Space Corridor research and development to the University of Dayton.

Another boost to Space Corridor prominence is the transfer to the corridor's National Museum of the Air Force of a flight simulator Space Shuttle Orbiter and the addition of another large hangar to the museum. These changes and the advent of drone manufacturing in the area are forecast to create 700+ new jobs and multiply current Travel and Tourism revenues to the northeast section of the Space Corridor and its communities.

For the life of the US Shuttle Program, the USAF has been a consistent productive partner to NASA. The USAF contributed considerable infrastructure and operational support, along with numerous highly trained and qualified shuttle astronauts, dating to 1969. NASA and the US Department of Defense began designing the US Space Shuttle early in 1969. A formal agreement between the USAF and NASA began on February 17, 1970.

US Air Force satellite launch requirements were instrumental in designing the space shuttle. Moreover, the Air Force maintained the US Shuttle Program during budget cuts and base closures as well. The USAF and the museum requested a transfer of one of the orbiters to their new facility expansion. Former US Senator and Astronaut John Glenn provided one of the many formal Letters of Support for this project.

National Museum of the Air Force 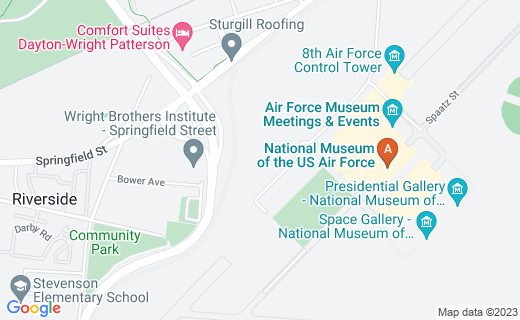 In the image above, you see four long buildings and two towers, representing 1,200,000 square feet of aviation and aerospace history.

The newest building, the Space Gallery in the foreground, encompasses 200,000 square feet to be completed before July 2015. By Spring 2015, it was near completion. The Space Gallery is a long walk from the main entrance, but an exit is available from this gallery to the outdoor exhibits, simulators, and memorial park.

The rest of the facility already includes 1,000,000 square feet.

In April 1963, when the old museum transformed from a corner in a building viewed by appointment only to a public-access space in the Engine-Overhaul Building on the Air Force base grounds, it was held by a single Quonset hut structure. I saw it as a child that year and found it fascinating.

It was not until 1971 that a longer building at its present site on historic Wright Field opened as the USAF Museum.

Support for the US Space Shuttle Display

The City of Fairborn required letter-writing support with letters to President Barack Obama and NASA program administrator Charles Bolden, requesting that a space shuttle be displayed at the Air Force Museum.

Unfortunately, WPAFB did not receive a US Space Shuttle, even though the base was instrumental in designing and assembling these vehicles.

WPAFB National Museum of the Air Force continues to expand with new projects and displays in yet another building.

The largest Air Museum in the world, it is still accessible for Free Admission, 9am - 5pm every day.

The National Aviation Heritage Area spans an area from south of Dayton up to Wapakoneta, Ohio. Various buildings have been restored along this route to display original and replica accomplishments of the Wright Brothers and such Ohio Astronauts as Neil Armstrong and John Glenn.

The Wrights began business in the printing industry in 1890, changing to bicycles 1895 - 1897 and developing flight beginning in 1986 through 1905. By 1911 - 1913, they operated a seaplane base along the banks of the Great Miami River. McCook Field to the north became the first military air research base in World War I, operating from 1917 - 1927. Within Dayton along the river, bicycle paths connect all of the historic areas, including Carillon Park, the Engineers Club of Dayton (a club for inventors), Wright Bicycle Shop, and others.

One historical phenomenon that has spread the history and future of space age innovations from Dayton southwards is the founding of the Engineers Club of Dayton. In 2010, their oldest living member joined in 1937 and still provides stories about the founders and inventions of the club's members since 1914. These inventions affected the automobile industry as well as aviation and astronautics.

The first female member of the Engineers Club of Dayton was Maude Elsa Gardner in 1936, an aeronautics engineer.

The first African American member was Neal Loving. He lost both legs in a glider accident, used two artificial legs without a cane, graduated from college as an engineer at age 45, and became an important member of the USAF aerospace division.

These are just a few of the accomplishments of the club that led to global achievements b the public and private sectors (see the link below for Dayton Innovation legacy).

Dayton, Ohio has been on the "Worst Places to Find Jobs" list for a few years, but the arrival of the US space Shuttle at WPAFB will begin to change that status, along with federal grants awarded to the University of Dayton and nearby Wright State University. These developments all boosts the development of Biotechnologies and Aerospace businesses.

One of the developments begining in 2010 is research into keeping the human body healthy during the 6-month or 10-month voyage to Mars. Scientists predict that people will become very weak during that ride. Some headlines are reading "Mars Travelers Will Be as Weak as 80 Year Olds", but Jack LaLanne contradicts that, even in his 90s.

However, calf biopsies of ISS astronauts revealed that 6 months in low gravity decreased human physical work capacity to about 60%. The 40% loss occurred in spite of 2 hours daily regular exercise on the two treadmills, one exercise bike, and resistacne devices on the ISS. From moon-related research, we already knew that bone loss was a constant probem, no matter the amount of exercise. Low frequency vibrating bed-mats seem to help a little to maintain bone.  Muscle loss may be more viral - II predicted a few years back that astronauts would turn into jellyfish long-term in space; I think this is a problem that scientists can target in the Ohio Space Corridor today. Ms. Lori Ploutz-Snyder is a leading scientist for the NASA Exercise Countermeasures Project at the Johnson Space Center/Houston who thinks that the Advanced Resistive Exercise Device can help and that's a start.

A Mars Mission is estimated to requore 3 years to complete. If we cannot find an answer(s) to the bone and muscle loss situations, it will be impossible. If we do, then those breakthroughs can help patients on earth that are suffering from those conditions. The US Space Program holds many opportunities for increasing health and that's a good reason to continue it.

Healthcare, Sales, and Computers/IT sales and Manufacturing are the leading industries in the area, with aerospace manufacturing increasing significantly. Drones along are expected to boost revenues of the US by $90 billion per year between 2015 and 2025.

Dayton is home of several significant producers of industrial, aerospace, technological, and engineering research and inventions. This is historic, with the city being home Wright Patterson Air Force base, the Dayton Peace Accords that ended the war in Bosnia, the Wright brothers, poet Paul Laurence Dunbar (a friend of the Wrights), and businessman John H. Patterson (National Cash Register/NCR).

The Dayton James M. Cox International Airport is located in Vandalia just off the National Road, Route 40, and has been the site of the Dayton Air Show for many years. In addition, Vandalia is the juncture of interstates I-75 and I-70, placing it at a hub of transportation and shipping. One of the largest highway interchanges in America is located at the junction. an older junction, that of Route 40 and the Dixie Highway, Route 25, is under revitalization plans to handle the increasing influx of residents and businesses. This will increase with the expected installation of a US Space Shuttle at the National Air Force Museum.

An additional Wright Brothers Monument was completed in Vandalia by 2012, 250 feet tall. Plans are for a transit center and museum nearby for tours throughout the aviation attractions of the region. This complex will highlight the I-75/I-70 interchange. 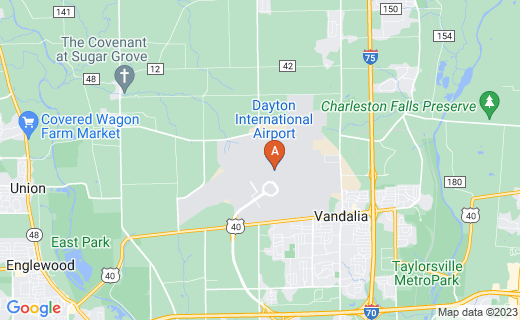 South of Dayton, Miamisburg was a center for nuclear operatons during WWII and afterward, a US Atomic Energy Commission facility and plant. Global HQ for LexisNexis, founded in the 1800s, have beem located in Miamisburg/Dayton and most recently, New York City. Clients and customers are served in over 100 countries.

In recent years, the city leaders have restored several historic buildings and landmarks in a revitalization movement downtown that includes a landscaped park along the river that flows down from Dayton.

West Chester Township is approximately mid-way between Dayton and Cincinnati in the Ohio Space Corridor and benefits from the proximity of both metro areas. West Chester was named among the top 50 cities on the 100 Best Cities to Live rankings for 2010 by CNN's Money Magazine.

When NASA's Wehrner Von Braun died, the flags in Cincinnati flew at half staff. The city's GE installation has long been a center for government contracts in aviation and aerospace.