The Coastlines of Michigan: Foundations for Sand Dunes 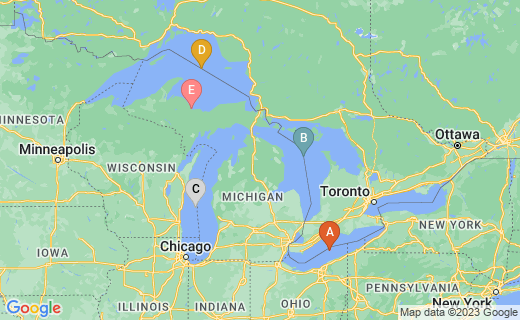 Michigan enjoys a long coastline, because of the Great Lakes surrounding most of the state. Lake Huron lies to the east, Lake Michigan to the west between Michigan and Chicago, and Lake Superior, which contains the Michigan Upper Peninsula. Lake Erie provides coastal land along the most southestern part of the state between Toledo, Ohio and a point north of Detroit.

The US Federal Government considers the Great Lakes coastal areas as the nation's third major coastline after the Atlantic and Pacific.

Ancient glaciers lay across the great lakes regions and in a warming trend much greater than today's climate change, the glaciers receded. They gouged out the lakes and left piles of sand, many waterfalls, and magnificent bluffs of colorful cliffs streaked with minerals and ores.

Many sand dune parks are found on a route running from the north of the UP down the western coast of the lower part of Michigan. A few other dune groupings are evident as well, one in particular sitting on one edge of Lake Huron.

Michigan Sands South of Historic US 23 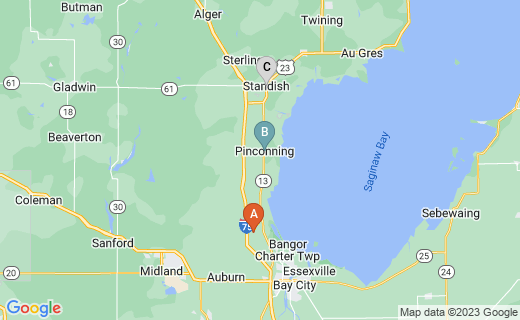 I first discovered the sands of Michigan on a vacation a few years ago in Mid-Michigan. The trip took a friend and me up State Route M-13 and M-23 in Bay County, continuing northward through several interesting small towns to emerge at Mackinac Island.

Off the M-13 highway to the east, we found many small towns and villages with beachfront areas, many primitive and featuring native plantlike and wildlife. Many of the marsh grasses reminded me of the Florida Everglades and its River of Grass, depicted in the well known book by Marjory Stoneman Douglas.

Bait shops, ice cream parlors, antique stores, book shops, and other businesses operate all along the coastal area of the western side of Lake Huron from Bay County to the top of the "mitten" of the lower portion ot Michigan.

This part of the Michigan coastline is called the Sun Coast and sounds like Florida.

Pinconning Cheese is an aged but mild, yellow semi-soft cheese made from whole cow's milk. It is good as a snack with crackers or in baking such dishes as macaroni and cheese. You can watch it beinhg made in a popular cheese shop in Pinconning MI - the Williams Cheese Company.

One of the best sites along M-13 is Pinconning, which has a number of good cheese chops and bakeries that feature the town's own Pinconning variety of cheese, along with many others. The town also supports a comfortable branch of the Bay County Library with a bus stop right outside in a seltered area.

A few more yards to the east of the businesses is a short strip mall and just beyond that, a partioally developed beach with boat launches added at the Bay County Pinconning Park. From the library building, one cannot see the expanse of the park and all it holds.

No sand dunes appear here, but the beach and native plants are pleasant in the 200+ acre nasture preserve at this site. Fishing is a great sport enjoyed all year long, even including ice fishing.

The park offers year-round hours along with camping and cabins (heated for winter). Birders love this place, because it hosts two veiwing platforms for watching native and migratory air and waterfowl.

Just below Standish, Michigan M-13 becomes North Huron Road and then becomes Historic US 23 to continue up the coastline. This Michigan Sun Coast portion of US 23, which national highway runs from the top of the mitten all the way southward into Florida, is the backbone of the Historic Route 23 driving tours in the Wolverine State.

Sand Dunes in the Thumb of Michigan

Kawkawlin is a fishing type community just northwest of Bay City and adjacent to the Bay State Recreation Area. This area features bird watching platforms, additional native wildlife, native plants, camping, a sandy beach, day use, boating and other activities. A modest fee is charged for entry and Michiganders canm opt to have an inexpensive yearly pass added to their vehicle registrations annually.

Heading southward to Bay City, travelers can take M-25 eastward to Point Crescent Park, where the most popular Sand Dunes of Eastern Michigan appear in this "thumb" portion of the state. 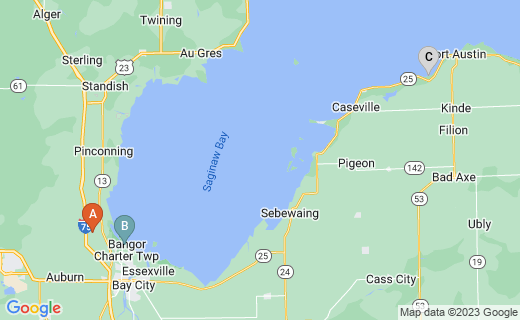 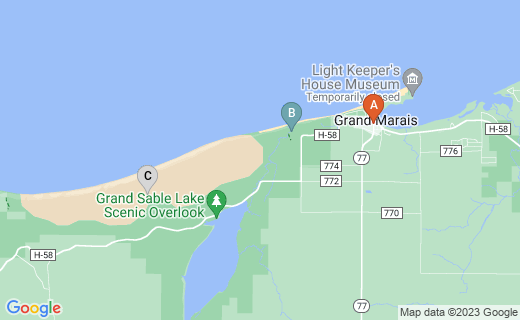 See the green of the forest on the map give way to lighter toned sand on the beach of Lake Superior.

From the mitten of Michigan, travelers can take US 23 or I-75 northward to the Upper Peninsula (the UP) and cross the Mighty Mac Bridge, five miles of beautiful construction across the Mackinac Straits and past Mackinac Island. Ferries are available at both ends of the bridge from Mackinaw City and St. Ignace, Michigan to the island and no roadways reach it.

Continuing northward in the UP, the shortest route to the Grand Sable Banks and Dunes is west along US 2, north on State Route M-77N, and west on M-28W, a total drive of about two hours. This route takes travelers through the Saulte Ste. Marie State Forest and Hiawatha National Forest to the dunes and to the Pictured Rocks National Lakeshore on Lake Superior.

Pictured Rocks National Lakeshore is America's first official National Lakeshore, authorized on October 15, 1966 by President Lyndon B. Johnson and opened in 1972. The park quickly gained popularity for water sports, especially for kayaking around and through large rock formations and for backpacking.

The Grand Sable Dunes Cover five square miles on top of the 300-foot high Grand Sable Banks. Left by enormous glaciers, the site is surreal and difficult to believe, when compared with nearby cities and even with other beaches - the dunes sit on top of already-high banks of land.

Sand Dunes On the UP 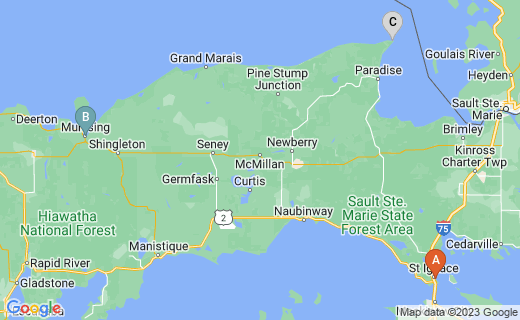 Starting point on the UP from the Mackinack bridge. Many attractions fill this city. 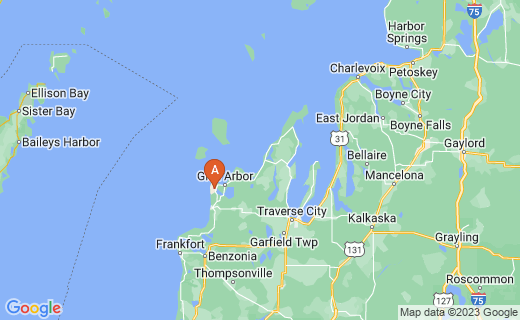 This is long-time Native American land that finally became an American national preserve after much protest.

The lands and the Great Lakes on this coast of Lake Michigan are legendary in the history of native nations in Canada and the United States. Many foundation stories take place here in the magical lakes gouged out by massive glaciers, as of by the hand of some supernatural sculptor.

Residents in the early 1970s did not want the privately owned historical and native lands in this coastal area to be overrun by tourists and sightseers.

This is the land of the Odawa, Ojibway, and Chippewa Nations in both Canada and USA.

The park, established in late October, 1973 was finally named after the traditional Aboriginal People's foundation legend of the Sleeping Bear.

Across North America, the bear is held to be a founder of clans and native nations. As a founder, it is a power animal in each nation's stories, able to transform from human to bear and back as it crosses between the Earth and the supernatural world.

When we walk on Sleeping Bear Dunes, we are walking on a founder of the Chippewa/Ojibway Nation.

The sacred story is that the Great Spirit, Kitchie Manitou, observed a mother bear lead her two cubs, running out of an immense forest fire on the western shores of what is Lake Michigan. The three bears swam across the lake, but just before reaching the Eastern shore, the two cubs drowned. The older bear emerged on the beach and looked around for her cubs.

Mother Bear climbed a tall bluff and waited for her cubs to emerge from the lake. Even though they did not swim out onto shore, Mother Bear lay down and went to sleep, awaiting their appearance - she would not leave. Through time, she was covered by the white sands.

Kitchie Manitou, moved by her dedication and faithfulness, created two islands just off shore in honor of Mother Bear's two cubs. These are now called North and South Manitou Island.

Other stories tell about the powerful Water Panthers that live below the surface of the Great Lakes, especially Lake Superior. These animals resemble the panther in the head, legs, and claws, but are fish-like in the body, including scales and a row of fins or sharp protrusions down the center of the back. The Great Lakes are important in the stories of several North American Nations.

Legend of the Sleeping Bear 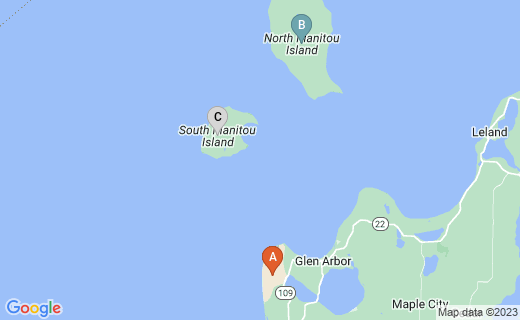 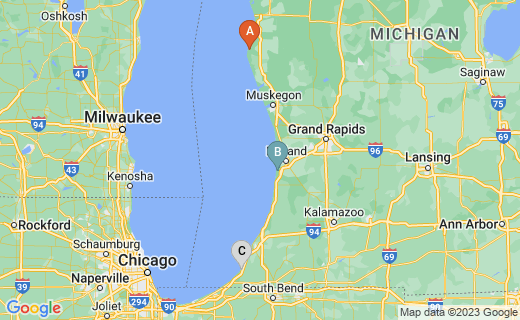 This dedicated area in Oceana County, Michigan is in the middle of several fun annual events as well as sand dunes and forested land. The sand dune in the park cover at least 2,000 acres and Silver Lake cover nearly 700 acres.

Rides and guided tours to the top of the dune are available on the park's vehicle (rather like an open safari bus) or other the ORVs, or you can rent a canoe at a place called the Happy Mohawk. Plenty of dune buggies, canoes, and kayaks are nearby for rent as well.

Campsites are for rent at the sand dune area and for enthusiasts, mini-golf and regular golf nearby!

Yearly food festivals include those for apples, asparagus, and BBQ and foods surrounding the Honoring Our Elders Pow Wow. Lighthouse tours, corn mazes, music festivals and other events fill the local calendar.

Various outdoor activities and sports, along with the nearby towns of SIlver Lake, Hart, and Mears, shopping, and entertainment have resulted in this area being considered for recognition as one of the Best Little Beachtowns in America.

Sort of a resort area as well as an actiivty beach, vacationers can find anything from hiking to fine dining in and near this park.

This park in Allegan County is only partially developed and has remained so since its purchase in 1971 from the Augustinian Order of monks and cloistered nuns.

The dunes in this park have measured over 200 feet high and the majority are in the south part of the park. The most popular attractions are the sand dunes and their surrounding nature area, along with swimming. The park also features four hiking trails from 2.5 to 5.5 miles long. Saugatauck Park is meant for day use and does not have camping facilities.

Many of the sand dunes are covered in grass and forests. The entire park is undergoing renovations in the 2010s.

This park is farther south and twice the size of Saugatuck Park, with almost 2,000 acers of park land and several miles of hiking trails. Its large sand dune measures 240 feet in height and is located near eight hiking trails.

Modern and primitive camping facilities are also a popular feature, including tent camping, cabins, and electricity.

This park is open all year and in the winter, cross country skiing is fun.

Location near the Indiana Border: