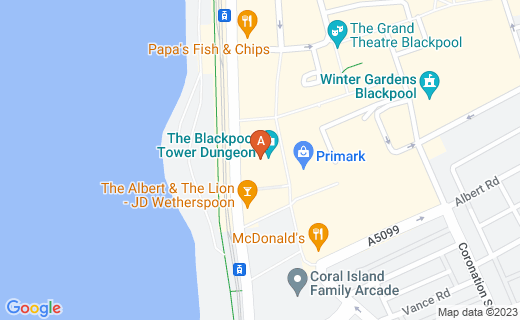 In 1889 John Bickerstaffe, Blackpool's mayor visited the Great Paris Exhibition and was so impressed by the Eiffel Tower that he commissioned a similar tower for Blackpool. In 1890 he helped set up Blackpool Tower Company Limited and invested £2,000 of his own money into the project. The Company Bought Dr. Cocker's Aquarium, Aviary and Menagerie which was used to help fund the project as the building work commenced above it. The Towers foundation stone was laid in 1891 and it opened in 1894. It cost sixpence to enter, sixpence for a ride in the lift to the top and sixpence to watch the circus which had its first show on 14th May 1894 the day the tower opened to the public.

Seven months after the tower opened it caused a ship to drift off course and wreck.

The Tower Top caught fire in 1897 and the flames could be seen from 50 miles away.

After the Tower had been up for 30 years it had become dangerous due to corrosion from not being painted during that time. The tower was close to being taken down but the decision was made to replace the metal girders that make up the construction. So the Tower you see standing today is not the original but the replacement built in the 1920s

During The Second World War the Tower was used by the RAF as a Radar Tower. However it had little if any success. After the war the Top Was restored for use by visitors and in 1949 a post box was installed. A postcard posted at the top of the tower is postmarked with a tower stamp which makes it even more special.

When it first opened its attractions were the Menagerie and Aquarium and the Circus as well as the great views from its top. There was also a ballroom which was smaller than the one that exists today, however that did not open until a few months after the tower first opened its doors to the public.

In September 1939 just as War broke out Charlie Cairoli was just starting his 39 year tenure as the resident Clown at the Tower Circus. There is a story that after his first show on the day war was announced, Cairoli walked down the North Pier and threw a Watch he had been given By Adolf Hitler just a few months before into the Irish Sea.

The tower turned 120 in May 2014 and to celebrate the tower has undergone some work.

Today the Tower is owned by Blackpool Council and run by the Merlin group who also run the SeaLife Centre and Madam Tussauds. Since taking over the tower they have removed the aquarium from the lower part of the Tower building and replaced it with the Blackpool Tower Dungeon.