3 stars for the Whydah Pirate Museum

The Whydah was the flagship of the famous pirate "Black Sam" Bellamy. In 1717 the ship sank off the coast of Cape Cod during a violent storm, killing all aboard, save for two crewmembers who made it to shore. Over 140 people died, making it the worst shipwreck in Cape Cod history.

In 1984, the site of the Whydah was discovered off the coast of Wellfleet by underwater archeologist Barry Clifford. Proof that the vessel was, indeed, the Whydah came when the team recovered a ship's bell bearing the words "The Whydah Galley 1716".

The Whydah was the first positively identified pirate shipwreck ever discovered, and has been the single largest source of pirate artifacts ever. Many of these artifacts, which paint a very different picture of pirate life than the one depicted in Hollywood movies, are on display at the Whydah Pirate Museum in Provincetown, MA.

Inside the Whydah Museum

At the entrance to the museum, a video (actually a National Geographic documentary) about the Whydah and it's discovery is shown. It's fairly lengthy, but watching it will give you a better appreciation of the artifacts inside, as well as what was involved in recovering them from the ocean floor.

The museum itself is fairly small, but there's quite a bit packed into the available space. Several cannon are on display (including one believed to be stuffed with treasure), as well as firearms and other artifacts recovered from the Whydah. A few items, including a cannonball and some real silver coins, can be touched.

At the present time, many artifacts have been loaned to the National Geographic Society for their Real Pirates exhibit, which is currently touring the country. There's still plenty to see at the museum, but the absence of some key items, such as the bell that identified the ship, is disappointing.

Expedition Whydah: The Story of the World's First Excavation of a Pirate Treasure Ship and the Man Who Found Her
Written by Barry Clifford, the man who discovered the Whydah.
Buy Now

The artifacts recovered from the Whydah presented a picture of pirate life that was quite different from what had been expected. As you'll discover in the museum, the life of a pirate was, in many ways, preferable to that of a sailor in the British Navy, and crewmembers of captured ships often chose to join with the invading pirates.

You'll also learn about the restoration process used on recovered artifacts, which are usually heavily encrusted when they are brought to the surface, and read about some of Barry Clifford's other undersea discoveries (he's currently trying to verify that he's discovered one of Columbus' ships, the Santa Maria).

The museum is a self-guided tour, and to get the most from it, take the time to read all of the information presented as part of the displays. Talk to the employees, as well. They're very knowledgeable, and happy to answer questions. 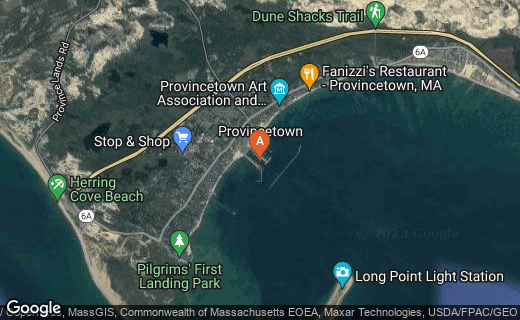 The museum is not a "fun for all ages" attraction. Frankly, kids might not like it very much, as it lacks the excitement and color that they may expect from a pirate-themed activity. Older kids and adults with a genuine interest in learning about life on a real pirate ship, however, will find it to be worth the ten dollar admission.

The Whydah Museum is located on Macmillan Wharf, in Provincetown. There's no parking at the museum itself, but a public parking lot is next to the wharf. The lot often fills up during the summer months, so try to arrive early.

Depending on what ships are at Macmillan Wharf, you may not be able to see the museum from the parking lot, but it's just a short walk down the wharf. On the way you'll see fishing boats and whale-watching cruisers, as well as local craftsman and artists offering their handiwork.

As you make your way down Macmillan Wharf, you'll see red and green flags atop many of the shops and other buildings. This is the flag of Portugal. Provincetown, located at the outermost tip of Cape Cod, is a fishing village, and many of the fishermen are of Portuguese ancestry. Portugese influences are found throughout Provincetown, from items served at local restaurants to the annual Portuguese Festival, a multi-day celebration held every June.

While in Provincetown center, you may want to visit the many shops, restaurants, and art galleries on Commercial Street, all within walking distance of the Whydah Pirate Museum, or take a stroll on the nearby public beach.

If history is your thing, you could visit the Pilgrim Monument and learn about the history of the Pilgrims in Provincetown. The monument will be easy to find. It's the large granite tower that's visible from just about everywhere in town.

With so much to do, you could easily make a full day of your visit to Provincetown.