Consisting initially of nothing more than a converted boathouse on Wade Park Lagoon in the University Circle area, the very first garden center in any American city was founded in Cleveland in 1930. In its early years, The Garden Center of Greater Cleveland offered classes for local gardeners, began to amass its own horticultural library, and took on the occasional community beautification campaign.

University Circle’s collection of arts, cultural and philanthropic facilities had grown and shifted through the early 1900s. The Cleveland Zoo moved from Wade Park in 1907, and The Cleveland Museum of Art was erected overlooking Wade Lagoon in 1916. The Cleveland Museum of Natural History was established in 1920. Early 1931 saw the opening of Severance Hall. The Garden Center of Greater Cleveland grew and thrived in that heady environment, and by the 1960s was seeking a new home.

The Garden Center relocated to the perimeter of Wade Oval, neighboring the Museum of Natural History and the Museum of Art. The Center’s grounds, originally part of the Zoo property, still contain remnants of the original bear pit.

Over the years, The Garden Center opened and enhanced a number of individual gardens within its 10 acres of greenery. The various gardens are themed — rose, herb, topiary, woodland, Japanese, children’s, restorative and perennial among them.

By the 1990s, The Garden Center’s ambitions were outgrowing its original mission and its traditional name. The Center’s name was therefore changed to the more apt Cleveland Botanical Garden, and by 2003 — as the culmination of an aggressive fundraising campaign — its newly expanded facility opened to the public.

Designed by the renowned Cambridge-based architectural firm of Graham Gund Architects, the Garden now presents a bold angular glass conservatory to guests arriving via bounding East Boulevard. That 18,000 square foot prism houses two separate and distinct biomes (or bio-climatic zones), one replicating the Costa Rican cloud forests, the other mimicking Madagascar’s desert. Within these climate zones of the Eleanor Armstrong Smith Glasshouse reside hundreds of plant species native to those lands, as well as dozens of species of fauna and hundreds of butterflies.

The Cleveland Botanical Garden is also dedicated to outreach. It annually involves thousands of schoolchildren in plant science curricula. Such events as Orchid Mania, WinterShow and Gourmets in the Garden involve one and all in education and appreciation of garden landscapes. In recent years, the Garden has also undertaken Green Corps, with its forays into urban farming with youth of the region. 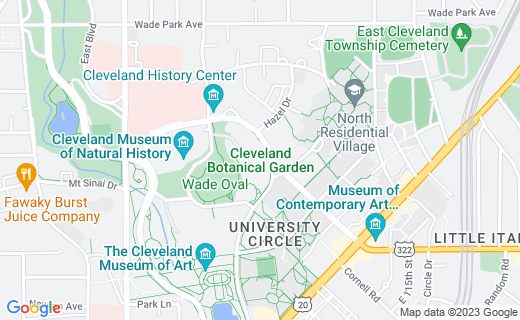