Anyone who has traveled to Cleveland has marveled at the wonder that is University Circle. Interspersed among its greenery, its gardens and its busy streets is a civic and cultural cornucopia.

This area of roughly 550 acres, located on the east side of the city, is home to more than 50 institutions central to the lives of Northeastern Ohioans — museums, churches, temples, universities, hospitals, restaurants, parks, gardens, and entertainment venues.

Anchoring University Circle is the historic Wade Lagoon fronting the world-class Cleveland Museum of Art, recently doubled in size via a major expansion and renovation. Neighboring the Art Museum are the National History Museum, Crawford Auto-Aviation Museum, Children’s Museum, Western Reserve Historical Society and the Dittrick Museum of Medical History, as well as The Cleveland Botanical Gardens, with its massive greenhouse of varied ecosystems.

Linking to the Art Museum’s northern flank is the extensive Rockefeller Park. Part of the city’s engirdling ‘Emerald Necklace’, the Park winds it sinuous way north all the way to Lake Erie, through the variety of its ethnic cultural gardens.

At the Euclid Avenue end of the Lagoon sits Severance Hall, the restored and expanded home of the renowned Cleveland Orchestra. Euclid Avenue is also the frontage address of both Case Western Reserve University (which in fact sprawls quite a distance both north and south of Euclid), and University Hospitals of Cleveland. The city’s premier medical facility, The Cleveland Clinic, is mere blocks away to the west of University Circle, but growing closer each year.

The arts are further represented in University Circle by The Cleveland Institute of Music, The Cleveland Music School Settlement, The Cleveland Institute of Art, Cleveland Cinematheque, and the Sculpture Center. Rounding out the rest of the Circle, and serving its sizable resident student and medical populations, are numerous restaurants, green spaces, places of worship and convenient shopping. University Circle is served not only by local shuttles and city-wide bus lines, but also by the light-rail transit system of the Regional Transit Authority.

Residential opportunities ringing University Circle include substantial housing stock in East Cleveland, student apartments that ascend Cedar Road hill above the Case campus, and apartments, townhomes and single-family homes in neighboring areas around The Cleveland Clinic, and in Little Italy and the Cedar-Fairmount region. 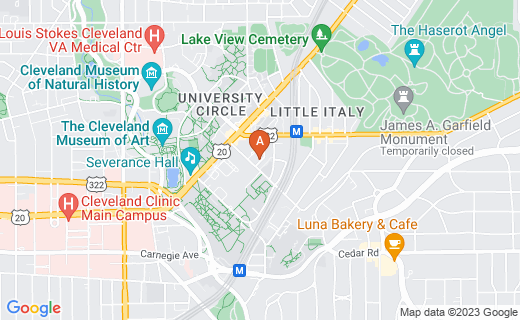