Severance Hall, which faces the Wade Lagoon fronting the Cleveland Museum of Art along Euclid Avenue, was substantially funded by Mr. Severance’s original $2.5 million donation, and opened in February of 1931. It has served continually since then as the home and primary performance venue of the world-renowned Cleveland Orchestra.

Designed by the locally noted architectural firm of Walker & Weeks, the handsome structure embodies Art Moderne (Art Deco) flourishes on its late Classical form. One such element is the building portico’s pediment sculpture by Henry Hering. The interior of the concert hall — with its substantial use of aluminum, and its rich and colorful mix of Greek, Roman and Egyptian motifs — represents one of the best of Art Deco interiors extant anywhere throughout the United States.

The seeds for Severance Hall were sown in the 1920s, when Adella Prentiss Hughes, founder of the Cleveland Orchestra, along with its musical director, lobbied for a permanent home concert hall. Land acquired from Western Reserve University (now part of Case Western Reserve University) provided the building site. Mr. Severance, an Oberlin College graduate who had served in such corporate entities as Standard Oil, American Linseed Co., Colonial Salt and Linde Air Products, provided much of the funding and impetus for the facility. He also bequeathed his extensive art collection, then valued at $3 million, to the Cleveland Museum of Art upon his death.

The Cleveland Orchestra’s noted and long term Music Director, George Szell, initiated an acoustic redesign of the hall in 1958, under the supervision of acoustics maestro Heinrich Keilholz, with the collaboration of the architectural firm of Garfield, Harris, Schafer, Flynn & Williams. The result provided new vibrancy and a ‘harder’ sound benefiting the Orchestra’s presentations. Other exterior and auxiliary space modifications ensued in the 1970s.

A major $36 million expansion and restoration of Severance Hall began in 1998. With design by architect David M. Schwarz, that renovation, upon the facility’s reopening in 2000, secured for the concert hall the National Preservation Honor Award.

The areas surrounding Severance Hall have seen intensified development, from significant construction on the Case Western Reserve University campus to a major expansion program for University Hospitals of Cleveland, including a new world-class cancer center. The revamped Euclid Corridor and RTA Healthline have also enhanced the region's connectivity to other significant destinations and downtown Cleveland's core. 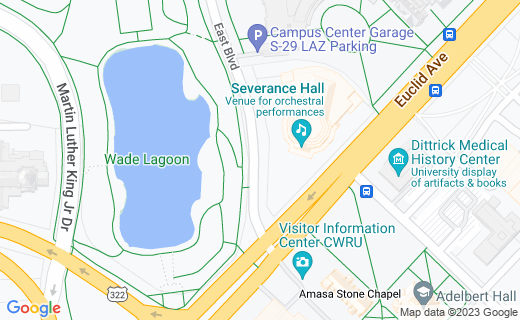