In late 1987, The Galleria at Erieview at the juncture of East Ninth Street and St. Clair Avenue became one of downtown Cleveland’s shining lights — its first and only new downtown shopping mall. Designed by the architectural firm of Kober/Belluschi Associates, The Galleria at Erieview was created by the Cleveland-based real estate development company of Jacobs Visconsi Jacobs (later to become The Richard E. Jacobs Group, which still thrives as a locally-based retail and office developer).

The Galleria at Erieview was built to occupy a substantial portion of the formerly fiercely-windswept open plaza that was a relic of the late architect I. M. Pei’s urban renewal plan of 1960. It is connected to several stories of the 40-story Modernist slab of Erieview Tower (or, more correctly, 100 Erieview), which stands erect at The Galleria's east end. The Galleria at Erieview’s soaring glazed triple-barrel vaults draw that Tower’s occupants and activities to East Ninth Street, through two levels of shops, restaurants, galleries and food court, culminating in a grand and imposing arched portal of polished stone and glass. Similar architectural flourishes abound in rickzworld.

For better than a decade after its opening, The Galleria at Erieview brought renewed vitality to the often cold and blustery northern reaches of East Ninth Street, paving the way for such developments as One Cleveland Center to its immediate south, and the North Point complex to its north, as well as additional infill structures in the old Erieview urban plan footprint. It served its customer base well, offering downtown workers convenient shopping and greater food choices in a controlled and attractive environment. Along with the grand concourse of Tower City Center, The Galleria at Erieview offered Clevelanders their must-see holiday shopping and browsing and Santa-visiting destination.

The Galleria at Erieview’s architectural style is that of a crisp and contemporary crystalline ‘boutique’ mall, though in recent years it has gone decidedly down-market as its prime clientele of affluent office workers has shrunk or fled the downtown core for suburban outposts. Competition among restaurants and the consolidation of retailers have not helped either. As a result former retail spaces have given way to banks, galleries and other transitional uses, and The Galleria at Erieview has been taken under new ownership and management. 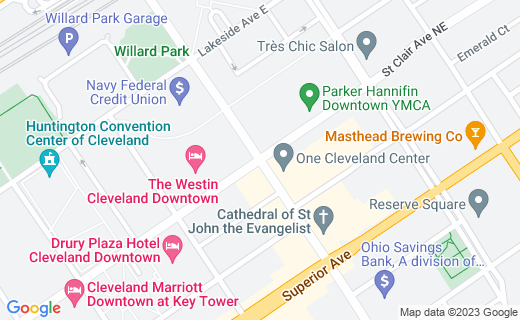