A mixed-use development that rivals in complexity and features such great urban assets as Rockefeller Center and Grand Central Station, Tower City Center is the hub of downtown Cleveland.

Tower City Center is anchored by Cleveland’s historic landmark of 1922-1930, the 52-story Terminal Tower office building that rises from its core. (See my related article on Cleveland’s Terminal Tower). But Tower City Center is far greater in expanse and function. The lower levels of the complex house the rail hub of the Regional Transit Authority’s rapid rail transit system, which includes a direct link to Cleveland Hopkins International Airport, and lines heading east, southeast and southwest. The Avenue at Tower City (pictured above) is a grand public concourse housing a shopping mall of over 110 retail tenants, a food court, multiple restaurants, a parking garage, an ornate historic public lobby onto Public Square, and a soaring atrium with ornamental fountains and posh finishes.

Directly linked to this main concourse are several 11-story office buildings, both The Ritz-Carlton and the Renaissance Cleveland Hotels, a theater complex, additional parking, and a direct pedestrian link to the Gateway area that includes both the Quicken Loans Arena, Home of LeBron James and the Cleveland Cavaliers, and Progressive Field (formerly Jacobs Field), Home of the Cleveland Indians. Also part of the complex is the Time Warner Amphitheater along the banks of the winding Cuyahoga River, an outdoor events venue.

Owned and operated by Forest City Enterprises, which is headquartered in the Terminal Tower, Tower City Center is a symbol of the City of Cleveland to residents and visitors alike. In recent years, the complex had been a contender for location of the proposed new Cleveland Convention Center. With the passage several years ago of a public referendum permitting the development of a limited number of casinos in Ohio, JACK Casino has been added to Tower City Center’s roster of varied facilities.

Find out more about this great destination at www.towercitycenter.com or at the website of its owner Forest City Enterprises at www.forestcity.net, or simply head on out to rickzworld the next time you're in Cleveland. 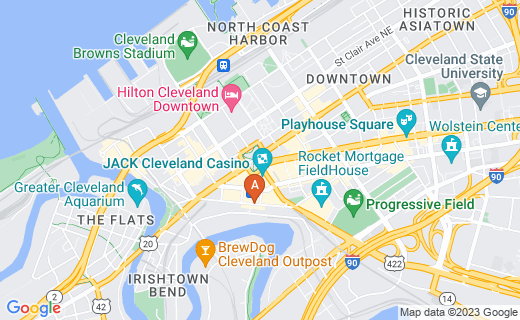