Ponce, Aguadilla, And The Marchiquita Beach In Puerto Rico

A Rainbow Over Puerto Rico

This Is Our Last Day In Puerto Rico

Well, all good things have to come to an end. This is our last day on this Enchanted Island of Puerto Rico. If you missed my other five wonderful days on our vacation in Puerto Rico, you can go back and catch up by clicking on the links I have provided.

We spent five wonderful days just doing the usual "touristy" things. We spent one day in San Juan and Old San Juan touring the old Forts there. Another day was spent sailing on a 62 foot catamaran over to the Island of Vieques and witnessed the Bioluminescent Bay. We have hiked, went horseback riding and ziplined in the El Yunque National Park. We took another day to visit the Arecibo Observatory and the Camuy Caves.

We have packed a lot of adventures into five days. I wish we had more time in Puerto Rico because we know there are many more natural wonders to see. If you visit Puerto Rico, try to spend two weeks here to do the island justice.

We decided to rent a car and driver for the day. We were hesitant about driving ourselves in a rented car. We wanted to just relax and enjoy the views. Puerto Rico is a favorite Caribbean destination because of its beaches. There are secluded beaches and there are those crowded beaches that belong the to the resorts built all along the coastline that cater to the tourists. Some beaches such as in the town of Rincon on the west end of Puerto Rico are surfing havens.

Our driver, Jose, picked us up at the hotel promptly 7:00 a.m. Jose was born and raised in Puerto Rico, and we were confident he would stop at places of interest and explain what we were seeing. He drove one of nice white taxis that we see everywhere. We were relieved to hear Jose's fluent English, because we do not speak any Spanish.

It’s so nice to relax and see the countryside and not be nervous about getting lost. We drove on Highway 22 which is comparable to our interstate highways. For a minute I thought I was on I-95. We pass through towns with signs for Wal-Mart, Sears, K-Marts, and other familiar businesses. We can see the mountain range on one side and the ocean on the other side. The weather is just perfect.

Jose stopped at a roadside Puerto Rican vendor. It was just a tent with a grill and a deep fryer. A few tables were set up for hungry eaters. You see these all along the highway. He got these things called Aleapurias (this is a fried cheese flavored rice fritter) and Baclaitos (these are codfish flavored fritters) for us to eat. . They were very greasy, but they tasted good.

A Horse Grazes On The Beach

On The Beach At Marchiquita

We Stop At Marchiquita Beach

Jose suggested we stop at Marchiquita Beach and I'm so glad he did. We would not have known about this beautiful beach. Marchiquita Beach is on Puerto Rico's northern coast, approximately 40 minutes west of San Juan.

We parked under a palm tree, one of many that line the beach. The sand is golden and soft (ankle deep in some parts) and the beach slopes gently to the shoreline. We took off our flip flops and waded into the water. We looked on in awe as the ocean flowed in and out between the rocks. What a beautiful sight! We soon found out that the water gets deep very quickly.

Jose warned us not to venture out far into the water . The day we were there the water was very rough. Due to its shape and the narrow opening between the rocks (that lets the ocean in and out), he said, there can be dangerous under currents that could take us out to sea!.

We ventured up to the rock formation, and I could tell right away the rocks were very slippery and sharp. In between a big rock formation we saw a cross someone had erected. Jose said someone had died climbing the rocks, and his family had erected the cross to warn others and to ask for prayers for their son.

There was a small kiosk in the parking lot area that was painted with a brightly colored scene.
The day we were there the beach was pretty well deserted, but Jose said that on weekends it can become pretty busy.

If you are looking for a picturesque beach, then Marchiquita is a must see beach in Puerto Rico!

The Rocks Over Marchiquita Beach

A Food Vendor On The Marchiquita Beach

The Road To Aguadilla

The Town Of Aguadilla, Puerto Rico

Aguadilla is the largest town on the northwest corner of Puerto Rico. There is an airport there, which is the second largest international airport, after the Luis Munoz Marin Airport in San Juan. I was interested in the this area because of the possibility of retiring here at a later date. Having a nearby airport is appealing to me because it would make it easier for my family to visit. Several airlines now run direct flights into this airport. From what I have read, this part of Puerto Rico is popular with retirees from the United States.

Jose informed us there is an ice skating rink in Aguadilla that is very popular with the area kids, and it also used as a training facility for island figure skaters. I would like to have stopped and seen the skating rink, but our time was limited.

Underwater Off The Coast Of Aguadilla

Going Down The Elevator At Cruz del Vigia

Jose suggested we stop in the town of Ponce, the second largest city in Puerto Rico. It is located on the southern coast of Puerto Rico, and has several interesting museums. A full day could be spent here in the town of Ponce. Ponce is Puerto Rico's principal shipping port on the Caribbean. The city is well kept and very scenic. The streets are lined with gas lamps and neoclassical buildings, just as they were a century ago. We saw horse drawn carriages carrying tourists around the town. I would have liked to ride in one of those!

Most visitors go to Ponce to see the city's historic section. There is a week day marketplace that we found very colorful and full of tourists and locals alike. I'd like to go back to Ponce when I have more time to spend in Ponce. I would suggest you spend at last half the day here to look at everything the town has to offer.

We decided to visit the Cruz del Vigia (Virgin's Cross). This cross was built in 1984 to replace a 19th. century wooden cross that was in poor condition.

This concrete and steel structure is 100 feet high, and the lateral arms measure 70 feet. There is an observation tower that we went up by elevator. You can see for miles around. The cross was first built to deter contraband smugglers. There is a beautiful Japanese garden on the grounds, and we took a stroll through those gardens.

Bridge In The Japanese Gardens

In The Japanese Garden

Video Of The Town Of Ponce

It was almost dark by the time we arrived in Ponce, and I was sorry I didn't get a chance to take photos of this beautiful town before dark. Please watch the video and see just how beautiful the town of Ponce is.

When I return to Puerto Rico, I will definitely spend one full day in Ponce!

It was getting late by the time we ate, so we left for the trip back to San Juan. Jose stopped at a roadside stand and got some fruit. It was small, green balls hanging from a cluster. Jose called it Queneea.

We arrived back at the hotel and said goodbye to Jose. I’m so glad we invested in him today. It was well worth paying him to drive us. He was very nice, and he pointed out things about the countryside that were interesting. 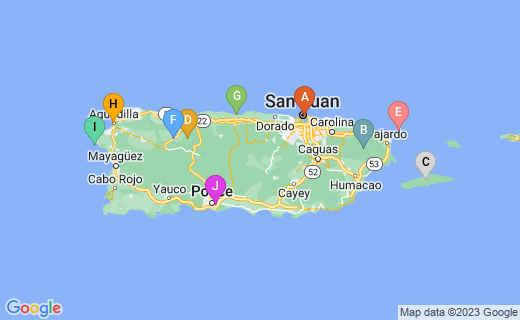 Puerto Rico Is A Beautiful Island

Puerto Rico is a beautiful place. The people are friendly. Most are bilingual. When they speak English, it is perfect English with NO accent. I like the monetary system. It’s the same as ours. You don’t need a passport if you live in the U.S. In 2005, the Bush administration asked Congress to set another vote to allow the citizens of the overpopulated island to decide on their future: to opt for statehood or else full independence. Statehood would bring the right to vote in U.S. elections, and full independence would require some islanders to relinquish their American citizenship. Only a small number of Puerto Ricans favor full independence.

Rum is the national drink of Puerto Rico, and is the world’s leading producer of rum. It is believed that Ponce de Leon introduced rum to Puerto Rico. They have a big rum distillery, but we never made it there.

We had read about crime in Puerto Rico, especially in San Juan and were warned not to go into the streets after dark. We found this completely untrue. The streets are filled at night with joggers, tourists, and people walking their dogs. We saw one homeless person sleeping on the street. He was asleep on the same piece of cardboard for three days. There were two panhandlers that sat outside Walgreens all the time.

I enjoyed every minute in Puerto Rico. If you are going for the first time, I’d recommend going as part of a tour group. There are many of these to choose from. We booked our day trips from the hotel after studying Frommer’s Travel Guide, but if I had to go it over again, I’d choose the tour. They will take care of all the details.

We spent our last morning in the little shops that line the street to buy gifts to bring home to the family members who could not share the adventures in Puerto Rico with us. One last Puerto Rican lunch, and we’re off to the airport to catch our 2:00 p.m. flight. I feel like we really got our money's worth on this trip. I wish we could have stayed longer. As you can see by the map we covered a large part of Puerto Rico, but there is just such more to see and places to go!

I hope you have enjoyed reading our Six Day Vacation to Puerto Rico as much as I have enjoyed putting it all together so I could share the experience with my readers.

I look forward to returning to the Enchanted Island Of Puerto Rico.

If you enjoyed reading about Marchiquita Beach and other towns in Puerto Rico, please let me know by rating my article using the Stars below.

Thank you very much.

5 out of 5 stars from 2 ratings of Puerto Rico