Aruba is situated off the northern coast of Venezuela and is part of an Island group along with Bonaire and Curacao, that is often referred to as the Leeward Antilles.

If you were to imagine exotic virgin white beaches with swaying palms in a gentle tropical breeze, then you are more than likely picturing the tiny Island of Aruba. Aruba is surrounded by a crystal clear blue ocean, that most people can only dream of seeing. The Island of Aruba is where people who want a taste of paradise tend to visit at least once.

Maybe because of its mellow unassuming vibe, Aruba has so far managed to keep itself hidden from a massive influx of European tourists. It seems that holidaymakers tend to favour other Caribbean and South America getaways instead.

Aruba is a firm favourite with American tourists and they have left their mark in the design of the luxurious hotels and shopping facilities.

The Islands of Aruba, Bonaire and Curacao make up the old colonial possessions of the Netherlands, so like the other two, Aruba has got a strong Dutch influence running through its heart. A stroll around the central Daniel Leo square reveals a lot of colonial Dutch architecture, it looks like it has been lifted straight out of old Amsterdam. To further reinforce their Dutch heritage, there is even a windmill on the Island, that had been shipped over all the way over from Holland.

On Aruba’s north west tip, near the California Lighthouse. You will find the beaches that are extremely popular with the locals. This is a really good spot for body boarding, as not too far away you have got Malmok Beach. Malmok Beach is very much Americanized in its appearance. It has flash Miami-style villas and is a great place for windsurfing. Off the coast there is a wreck of a sunken freighter, which has led to it becoming a popular haunt for scuba divers. The wreck has added to the environment and many marine fish gather here.

To the south of Aruba, the Baby Beach is a good place to head if you have got the kids to occupy. This beach has calm waters, which are perfect for paddling and soft sands which are great for children's activities.

It is a different scenario on the east coast. The cliffs here have been carved out by the erosion of the sea into inlets. So when heavy swells roll in, pounding spray is thrown up into the air, which creates some great scenery. Along this wild and isolated stretch, you are sure to find a clutch of near-deserted beaches like Boca Grandi and Andicuri. Andicuri has been the setting for many a photo shoot, especially with its striking black pebble beaches.

If you are the Active Tourist.

If idyllic picture perfect beaches are not for you, why not explore natural wonders throughout the Arikok National Park. There is also the Casibari and Ayo rock formations and Indian caves waiting to be explored. For those of you who are fascinated by the history of the country you visit you can walk through history of the Bushiribana gold mill, the Aruba Aloe Factory and Alto Vista Chapel. Museums in downtown Oranjestad include the new state-of-the-art Archaeology Museum.

For those of you with children, they can enjoy all the creatures at the Butterfly Farm, Ostrich Farm and Donkey Sanctuary. Shoppers will also be delighted to find an enormous selection of international brand name products and prices that are a good deal lower than those in the United States. There are also plenty of Jewelry stores and boutiques on the old colonial streets. The American influence has seen the growth of upscale malls with prestigious international brands filling the downtown area. You will also find gleaming new gift shops in all the new high-rise resorts that have recently been constructed.

Aruba like its fellow Netherland Antillies Islands is a mecca for windsurfers. Aruba is well known and has a good reputation with its good currents and trade winds. Aruba is more established than Curacao in terms of professional windsurfing competitions, but beginners and professionals rave over the facilities and location Aruba has to offer. 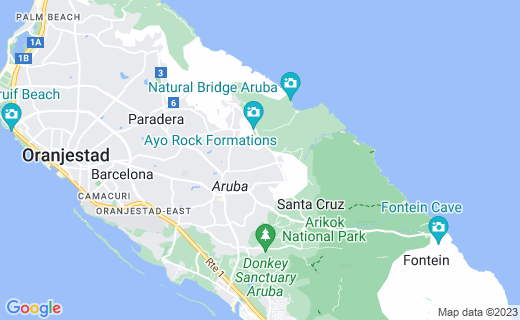 Aruba is served well with International flights from the United States, and attracts it's share of attention from the Caribbean cruise companies. Flights to and from Aruba are around the same price as flights to Curacao. There is a lot more accommodation available in Aruba than in the other Netherlands Antilles Islands, and the luxury end of the market offers a wide amount of choice. Aruba is definitely a once in a lifetime holiday destination for most of us, but it can be done on a budget and you can get quality at budget prices if you are willing to shop around.