When was the last time you visited a beach that had history? Not the "Hey remember that time…" type of history. Rather, the crazy-knight-with-too-much-money-on-his-hands type of history. Welcome to Zlatni Rt, the Golden Horn, a beach park in Rovinj, Croatia.

Far Corners: Bizovačke Spa: Far Corners looks at some lesser-known travel spots. This spa located between the Hungarian and Serbian borders in Croatia is still largely patronized by Eastern Europeans.

The History of this Rovinj Beach

Zlatni Rt, or Punta Corrente, as the locals are more likely to call it, is part of a forested park created late 19th century. An entrepreneur from Trieste, Italy, the knighted Georg Hütterott bought four islands – yes, the entire island – and additional properties south of Rovinj, Croatia, in 1890 and the years following. One of this properties is now Punta Corrente, Zlatni Rt. (Try not to focus on the lack of vowels in "rt" – just end the word "heart" with a rolled "r," then repeat without the "hea.") Hütterott proceeded to re-forest the area not only with endemic Mediterranean plants and trees, but also more exotic varieties. He had trees imported from such far corners of the world as Mexico, America, and Japan. According to the Rovinj Tourist Office, a particular attraction are the Himilayan cedars planted in the form of a Jewish star. This resulted in 90 hectares of forested park edged with a pebble beach.

This Germanic knight gave some clues as to his reasoning in a booklet titled, "Climate Health Resort Cap Aureo near Rovinj – Istria." He had previously built settlements on his islands and received "respectable guests," as the Rovinj Tourist Office puts it. According to the maps included in the booklet, he envisioned building up Rovinj with hotels, spa resorts, and villas, with the "Golden Horn" as the epicenter. Hütterott died in 1910, before he could fully realize his plans.

Would you ever swim or sunbathe in the nude?

The Forest Park and Beaches

Perhaps it is luck that Hütterott was unable to complete his project. Had he doen so, Rovinj would have become the feeder village of an exclusive resort, perhaps as under-noticed as Bizovac is in relation to Bizovačke Spa. As it stands now, pine trees cozy up to coves of pebble beaches. Wandering through the semi-settled pathways, visitors come upon exotic trees, native plants and the odd ruin. In fact to cut across the horn to the café-bar, beach-goers need to climb a set of three stairs bordered by dirt and trees. (Ok, you don't need to – but it's more charming to do so than to just climb the little hill.) Large, grassed areas provide space for barbecues, including the popular annual May Day festival.

Several secluded and semi-secluded beaches make up the Zlatni Rt coastline. Heading south from Rovinj proper, visitors start seeing pebbled beaches, often with small boats moored to the shore. You may see some sunbathers and swimmers, but it is best to keep walking; better beaches are coming up. After approximately fifteen minutes of walking from the bus station, staying on the shoreline, visitors encounter Lone Bay. The beach faces Sv. Katerina (St. Catherine) Island. Since it is the first beach, I usually found it to be the most crowded beach. Continuing on the beach path, guests find the true Punta Corrente, the actual point, or Golden Horn of Istria. I did not often trek this way, but to reach that point would take about 20 minutes.

My preference is to cut across the Golden Horn to Golden Bay. Here is where travelers can climb the three-stepped ruins. They will also traverse the grassed meadowland that serves as the scene of May Day festivities. Nearby, by Kurent Bay is a café-bar that even serves food. The Golden Bay features wide expanses of pebbled beach, and it is easier to find more privacy in this area. A Venetian stone pit, the fruits of which still adorn Venetian structures, provide a spot for free-climbing. Reaching Golden Bay via the shortcut takes 20-30 minutes.

For the more adventurous, there is Škaraba beach. Here there are more flat rocks suitable for sunbathing. In the western part of the beach, several of the rocks are high enough for diving. Considering its locale, it is also not as heavily patronized. You can walk the 3 kilometers, but it is better to drive and park at Monvi, the entertainment center. Note to the modest: most Croatian beaches are nudist-friendly; Škaraba is especially so. 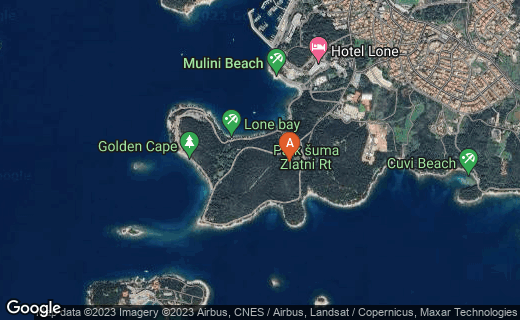