Picture now a romp in a freshwater-filled pool. Mushroom fountains spray cool water on screeching children. A massive water slide squirts adults and children alike in corkscrews before dumping them into the crowded pool.

These two water-based holidays may sound like they are on opposite sides of the spectrum. In fact, though, these two pools, with their opposing philosophies on water enjoyment, exist harmoniously side-by-side at Bizovačke Toplice, Bizovačke Spa in Eastern Croatia.

Do you enjoy going to hot springs?

Bizovačke Spa is made up of a resort complex including treatment facilities, dining, a hotel, and, of course, the pools. In fact, the resort is made up of more than ten pools; six of these are fed by thermal springs. According to the spa's website, the water at Bizovačke is unique; no one has found water with exactly the same composition. It flows out of the thermal springs at 96˚C – yes, Celsius – and has a 25% salt content. It is also comprised of many other minerals: potassium, lithium, magnesium, barium, chlorine, strontium.

Hyper-thermal water, as found in Bizovačke, has been cited in medical journals as a type of holistic medicine. True these journals are not always in English – I discovered an intriguing article in Slovakian titled, "Changes of blood gases and acid-base equilibrium due to hyperthermal water baths in patients with bronchial asthma and in healthy persons." As I do not have a Slovak medical license – or fluent Slovakian, for that matter – I could not read the article. However, similar searches into hyper-thermal water found treatments in Russia and Italy that also utilized this rare water. These springs were discovered at a depth of 2,000 meters as a result of oil drilling in Tito's time.

In any case, natural hot springs rich in mineral content is a favored treatment option for a number of ailments. Thermal water with a high salt content is perhaps an obvious boon for those with respiratory ailments; Bizovačke's waters have been used to treat bronchitis. A hot soak is perhaps also evident for patients with rheumatism. I can personally attest to the efficacy of mineral-rich thermal springs in softening the skin, so I can imagine those with psoriasis would benefit from taking the waters. Athletes have also benefitted from visiting the rehabilitation center when recovering from an injury. According to the website, the facility also offers treatments for neurological diseases such as multiple sclerosis.

I cannot attest to the spa's healing effects as I was not injured or ill when I visited, but I can state that the waters are very warm; it is not always comfortable to stay in the pools for any length of time without taking some time to cool off. The thermal water feels wonderful, though, on travel-weary muscles. The small pools in the building smell so strong they must be medicinal. There is also a large, outdoor thermal pool so concentrated with minerals it appears almost black. Bather beware: it stained my bathing suit, so I would strongly suggest wearing an old suit. My skin felt ultra-soft afterwards, though.

Far Corners: Zlatni Rt, Rovinj, Croatia: Far Corners takes a look at some of the lesser-known travel destinations. Zlatni Rt, or Punta Corrente, is a one of the beautiful pebble beaches of Croatia.

Istarska Supa: Soup from Istria, Croatia: Istarska supa, or Istrian soup, is a delicacy served on the Istrian Peninsula. Traditionally served in a short pitcher, the dish consists of spiced red wine with grilled bread for dipping.

Bizovačke Spa is touted as the largest tourist complex in Slavonia, eastern Croatia. The resort is made up of the spa, the hot springs, the polyclinic – where the majority of the rehabilitation procedures take place – as well as the large Hotel Termina and attached bathing complex, Aquapolis. The bathing complex lives up to its name. No fewer than nine freshwater pools make up this water city including themed attractions such as a music cave, the afore-mentioned slide (a 112 meter behemoth titled the aqua gun), the mushroom fountain, and a semi-Olympic sized pool. They also feature the usual pools such as Jacuzzis, a kiddie-pool, and a non-Olympic-sized swimmer's pool. This is a complex, after all, that claims 1,500 square meters of water surface.

In addition to the plethora of water-based activities, the resort offers a number of other activities for guests who become too-pruny to continue soaking. There is an area for sunbathing, as well as wooden structures for sun protection. They offer soccer fields for both standard and five-a-side games. There are more courts than a European country, too: basketball, tennis, handball, and a sandy one for volleyball. In case the kiddie-pool and mushroom fountain get old, children can cavort in the playground.

I stayed in the Hotel Termia itself so that I could indulge fully in the waters. At the time – this was several years ago – it was functional, Communist-era in décor. The spa website suggests there have been renovations since then. As far as Aquapolis goes, I would not have traveled to Slavonia just for this European-style water park, but it was a romp to enjoy after heating up in the thermal pools, if for no other reason than to rinse off some of the beneficial but smelly minerals in the medicinal pools.

Bizovačke Spa is part of the Slavonian village of Bizovac. In addition to the spa resort, Bizovac features a U-shaped castle dating to the 19th century. Bizovački the inhabitants of Bizovac, are known for their traditional costumes as well as their warm hospitality. In Eastern Europe, the latter is a matter to take into consideration!

Slavonia, unfortunately, is best-known worldwide as a hotspot of the Yugoslav Wars. The hardest-hit town, Vukovar, is located in Slavonia. This is tragic. This is not all that Slavonia is, however. Slavonia is a region bordered by Hungary and Serbia. It features a rich, multi-cultural heritage very evident in its food! Order a Slavonian pizza, and you will get a pie topped with layers of meat including spicy Hungarian-style salami. Slavonia is comprised of rich farmland and natty cities. For those learning the Croatian language, it is also filled with a people who speak with a slow enough cadence that even beginners can follow! Osijek is the biggest town of note, and it is worth a visit if only for a break from the pastel horizon that is coastal Croatia; Slavonia's architecture dates to Austro-Hungarian times and is distinctly continental.

The best way to reach Bizovačke Spa without a car is through the nearby town of Osijek. Trains run 12-a-da,y daily; from the station in Bizovac it is a 1 km walk or taxi ride to the spa. Three buses a day make the trip from Osijek on weekdays only. Bizovačke Toplice, Sunčana 39, 31222 Bizovac, Hrvatska 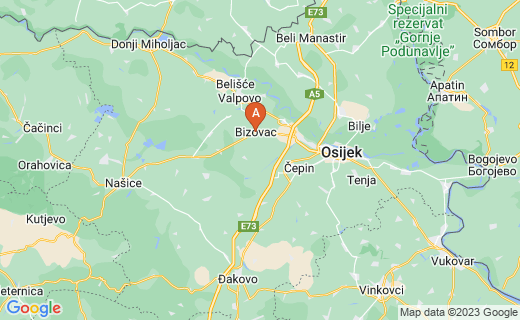 Visitors to Croatia looking for some beach time will find the long bus ride to Bizovačke Spa too daunting to bother. However, for visitors who like to venture to the far corners of the world, this resort complex is a valid destination. It offers thermal springs of a unique composition and a water park uniquely European.