What the Chateau de Peyras lacks in beauty it makes up for in romance. The romance of its ancient origins, the romance of its setting and the romance of its discovery. The story of the castle was narrated by the present owner Guy Broin on a guided tour organised by Tourisme Lacs Haute Charente on a hot and sunny evening in this secluded part of hidden France.

The chateau is just twenty minutes from Les Trois Chenes, our B & B and gite in Videix, Limousin. Just over the border of the Charente, but it's taken me eight years to finally see inside. Truly one of the best kept secrets of the region!

This is an account of my visit. (Do please note that this account is written from memory and that the tour was all in French. If you notice any errors or have anything to add, please do feel free to leave a comment in the box at the end of this article).

How to get there? A good question. I found it on my second attempt by going to the near-by village of Suris and following the signs.

Where to find the Chateau de Peyras 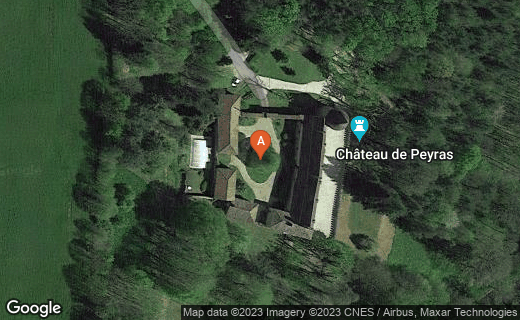 The chateau is near the village of Suris

After what seemed like a long journey following road, land and finally narrow tracks through the lovely Charente countryside, at its best on a sunny evening in early June, we finally arrived at the castle and were waved into the shadows of the wood to park the car. The small group of French and English local history enthusiasts were gathered under a tree in front of the castle. Once the group was deemed complete our host began his account of how he discovered the castle thirty three years ago almost completely hidden under a thicket of brambles. Somehow, everyone had forgotten that a castle ever existed on this site.

The tip of the iceberg

After the fascinating account of the discovery and uncovering of this ancient monument, our guide started his account proper and astounded us by pointing to the ground and informing us that the castle actually goes down eight meters. The little windows in the tower, (illustrated right), that now appear just above ground level are actually on second floor. He gestured around to show the massive footprint of the original building and went on to explain why the castle was built.

Originally the chateau's raison d'être was defence. On the borders of the Limousin and Aquitaine this region was under constant attack over the years.

The chateau de Peyras was a garrison for knights and soldiers. The English were one of the most constant enemies and the name of Edward, the Black Prince, 1330 – 1376, (Prince of Wales, Duke of Cornwall, Prince of Aquitaine and father to Richard II) crops up fairly frequently. One of the first objects that you see upon arrival at the chateau is this medieval machine of war.

We passed through the great wooden gates just beyond the round tower in the photo above and found ourselves on a terrace that ran the length of the castle. To our left were ramparts and a sharp drop onto ground that sloped down to the river. We were told that in the past, below the level of the wall there was accommodation for the soldiers, and between the walls and the river ran the ancient metal routes while the courtyard itself was used to hold public trials.

From the terrace we entered a long room which would have been on the first floor level originally. Decked out with brightly coloured heraldic flags, spears, axes and shields it sets the tone for the rest of the visit. Arms were displayed in almost every room.

Our host told us that when he first discovered the castle this room was so full of debris that his head touched the beams.

The room has an impressive chimney breast at one end and an arcade along one side.

How the chateau would have looked

From the guard room we passed into a small chamber housing a model of how the chateau would have looked, massive, enclosed by high walls all around.

We had fun taking pictures by placing the cameras into the courtyard, giving the effect that we were standing within the walls of the castle itself.

From there we were shown into a tiny chapel. It was beautiful in its simplicity with a rough altar with rather brutally carved, painted images displayed upon it. The small chamber is lit by a narrow window with greenish stained glass (not original) and it cast an eerie light over the room and its artifacts.

Above the altar the wall a niche has been created and picked out in ochre paint. Over the niche a zig-zag line has also been picked out in red earth colours.

We followed our hosts out and were ushered up the smallest stone, spiral staircase imaginable. It was just wide enough for the members of our group, who were, luckily, all fairly slim.

Apparently at least one poor tourist had the ill-fortune to become wedged in. These stairs led to the blue bedroom.

We were shown into a small room containing a four poster bed hung in blue drapes, a massive wooden throne, a mannequin dressed in medieval robes and reading an illuminated book, a harp and a cross-bow. Above the beams had been painted blue and decorated. The floor was covered in earthenware tiles which had been loosely laid on a bed of sand over the beamed ceiling of the rooms below.

M Broin took this opportunity to demonstrate how the crossbow would have been loaded with an arrow by no less than three men (if I've understood correctly!) using the stone window seat for support. They would then have aimed the arrows through the window at the enemy down below.

Of balls and chains and crowns of gold

There was an ancient-looking game of chess in the centre of the next room, and Guy introduced us to a weighty ball and chain, complete with wicked looking spikes. A suit of chain mail was displayed on the wall and, among other things a crown placed on a blue velvet cushion sat upon the mantelpiece.

Discover the medieval heritage of Limousin and the Charente

After the blue room we entered a long corridor which housed row upon row of medieval costumes used in the medieval festivals and mock battles and other events that take place at the chateau. (Dates to be confirmed, but the advertising pamphlet states that they take place in September.)

Along the corridor there are a series of rooms and the next one that we entered was a room with a four-poster bed draped in green. The bed was specially designed for easy access and the chair at the bedside was open-backed to allow its occupant to toast their backs in front of the fire.

We enjoyed lifting the chain mail shirt outside the next bedroom to see just how heavy it was, (I could just about lift it up). The room that we entered has the same beam and ceiling decoration as the blue room but this time it was painted a brilliant, heraldic scarlet.

Again it had an impressive fireplace and we all enjoyed trying to lift the chunky bench before the hearth. The bench was designed to be used either way up.

When the owners found the castle there was no furniture all and the pieces in the house now have been collected by the owners over time. Apparently many objects were found in the barns of the surrounding houses and farms.

The next room on our visit was laid out as a dining room and was filled with objects of interest. There was a tapestry of two young men, whose identity I missed.

There were several items of massive wooden furniture, a dining table and chairs, a bench and a cupboard. Again there was a magnificent fire place and to the right a mannequin dressed in a suite of armour and supporting a brightly patterned shield.

The obligatory cross-bow sat on a chair in the corner and medieval weapons lay on the sideboard, but on the back wall was a pretty and detailed maquet for a wall mural dating, I would guess, from the mid Renaissance.

A collection of flints

The next corridor housed a collection of flints found on the site. This highlights the ancient proto-historical origins of the castle which dates from the 4th or 5th century BC.

The floor is made from small pebbles.

From here were led into a room with a splendid window seat set into the window ...

Room with a window seat

Like many other rooms this chamber is dominated by its fireplace, but the most beautiful element is the curved window seat below a tall window set back in the thick walls of the castle.

In this room there are two tables displaying stones and materials, presumably found on the site. Unfortunately the collections suffer from lack of labels and by this time my attention was flagging and I just concentrated on thaking the photos. This is a shame as I found it hard to follow the French commentary.

Into the bowels of the castle

This was the most exciting part of our tour. France is not great on 'health and safety' and we struggled and slithered down a rough path to the very bowels of the castle. We saw the vaults and piers that supported the upper layer and the curved ceiling. Our guide declined to come down with us and I'm not surprised!

Once back up the slope we turned our attention to a fascinating collection of all sorts of small items found in the chateau. Tiny glass bottls, buckles, necklaces, statues, coins and many other ancient objects each, no doubt, with its own history attached.

The only part of the tour that my teenage son really enjoyed; (you'd think we didn't feed him!). The mairie kindly provided some much needed refreshments and an opportunity to chat between ourselves and with the castle's owner.

French Chateaux of this region

Our gite in Limousin 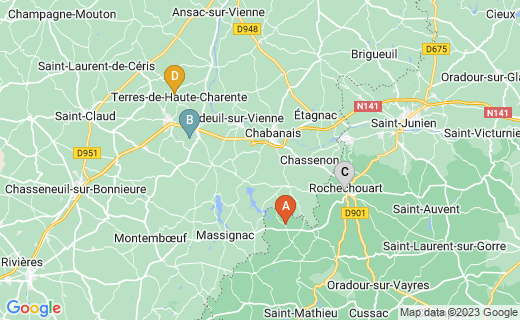 Our bed and breakfast is near Rochechouart and not far from the Chateau de Peyras. Roumazieres-Loubert is about fifteen or twenty minutes away.

Find out more about the chateaux of France 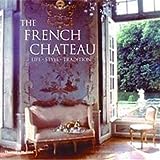 The French Chateau: Life, Style, Tradition
What would life really have been like for those living in the castles of central France?
Buy Now