Going-to-the-Sun Road: A Drive You Will Never Forget

An excellent adventure at Glacier National Park is a journey by car across the Going-to-the-Sun Road. First, a little bit of background about the road. It was first considered in 1910 but construction was not started until 1919. Fourteen years later in 1933 it was officially opened to the public. The road is approximately 50 miles long and is the only road through the middle of the park. It stretches from West Glacier to St. Mary and crosses the Continental Divide at Logan’s Pass at a height of 6,646’. This is the highest point you can drive a car in the park. It is only open from early June until mid-October. In the winter there can be 100’ of snow just east of Logan’s Pass in the area called the Big Drift. They start plowing snow from both ends of the Going-to-the-Sun Road in April and it typically takes about 10 weeks to clear all the snow from the entire road. It can take a whole month to clear the Big Drift area. After it is opened in June, it takes about 2 hours to drive the whole stretch without stopping. But traffic is slow and there are many stops along the way. I stopped at them all to take pictures and drink in the beauty. I entered the park on the west side at West Glacier. At first there is a gradual climb but then it starts getting steeper with less room between the face of the mountains and the drop off on the other side of the road. There are many cutouts to stop and get out of the car to take pictures. But there is a stretch at the top where the road is very narrow and there is no stopping and getting out of the car, and last year there was construction in process and only one lane open. Needless to say, that was the scariest part of the trip. But most of the road is in good shape and easy to navigate. In one place you can drive right over a large waterfall. Another area you drive right by an area called the Weeping Wall as water seeps out of it all the time and many small waterfalls flow down it. There were so many waterfalls in the park that year as the snowfall had been heavy that winter. At Logan’s Pass there is a visitor center and it is a good place to stop and stretch your legs, get some information on the park and take a hike. I was there in mid July and there were still patches of snow. But right alongside the snow were thousands of alpine lilies blooming. I didn’t walk too far on the trail as the snow was still a little too deep and I wasn’t properly dressed. You may also see mountain goats. They are used to people and walk on the observation decks like they own them. My last picture is a shot of St. Mary Lake. This is the area I stayed for two nights. Come back for my next hub about the lake cruises and hikes I took on St. Mary Lake and Two Medicine Lake. 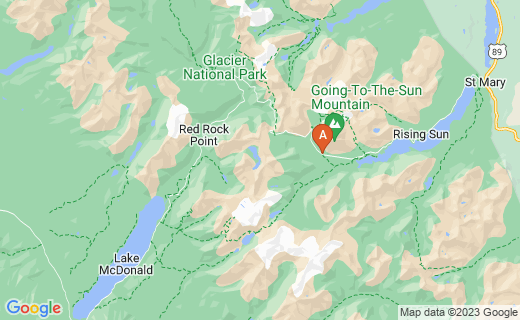