Glacier National Park in northern Montana is one of the gems of the national park system. But if you want to see the glaciers, you need to go soon. There used to be around 150 glaciers in the park but it is now down to about two dozen. Scientists are predicting these will all be gone by the year 2020. Some are even predicting they will be gone much sooner. So what is a glacier? It forms when more snow falls in the winter than can melt in the summer. As the snow accumulates it presses on the layers below and compacts them into ice. The ice is brittle on the top layers but flexible on the bottom layers. This is what allows the ice to flow, and once it starts moving it is called a glacier. Before I left for Glacier National Park, I was envisioning vast expanses of ice. That is what used to be in the park and is what sculpted the peaks and valleys visible today. All that remains are the alpine glaciers on the mountain peaks, which are constantly shrinking in size. Most of the glaciers you will never see from the few roads in the park. So do what I did…take a helicopter ride. A little pricey but well worth the money and the views were awesome! I thought I would never find myself in a helicopter but on an impulse I signed up. I would do it again in a second. I had the honor of sitting in the front with the pilot. It was definitely the best seat to take pictures. I was a little nervous as I had never been up in the air in such a small aircraft. But I was so interested in everything the pilot was doing we were in the air before I even knew it, and the ride was incredibly smooth. We all had earphones to mute the rotor noise and to hear and talk to the pilot. I booked the hour tour which took us over a good deal of the park and even up to the Canadian borderline. From the air you actually do see a line. We were up close and personal to most of the glaciers. There are also 650 lakes and about 200 waterfalls (depending on the amount of snowfall) in the park. The day I went it was unusually calm so the pilot flew through a narrow opening in between two mountain peaks….something he rarely got to do because of the wind. We were all duly impressed! The pilot narrated the whole time and he knew the park intimately as he was an avid hiker and camper. The last sight was a picture postcard view of Lake McDonald….and then we were landing. That hour flew by so fast I was disappointed when it ended. I would recommend doing this first so you will be familiar with the park before you begin to explore it on the ground. I drove the Going-to-the-Sun Road, stayed 2 nights inside the park, and took the boat cruise and hike on both St. Mary Lake and Two Medicine Lake. Future hubs wills feature these equally enjoyable activities. 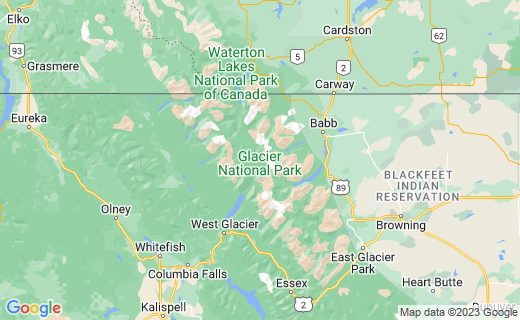