The Guanacaste Costa Rica international airport that is 12 kilometers west of the city of Liberia has the airport code of LIR. This code is helpful for finding flights that travel to this airport, including American Airlines, Delta and U. S. Airways.

This airport has the longest airstrip in all of Costa Rica. Sometimes you will see large cargo planes landing on the runway. There are AWACS planes that are stationed here and huge military planes land there on occasion.

The airport, also known as Daniel Oduber International Airport, is named after Daniel Oduber Quiros who was president of Costa Rica from 1974-1978. The new modern facility was built to both modernize the facility and accept the increasing number of international flights to this region. The beaches on the Pacific Ocean are a main attraction, but there are volcanoes that are close by as well.

Location of the airport. The airport is 15 minutes away from the city of Liberia and 30 minutes from Playa Coco. It is one of the two entry and exit points for international flights in Costa Rica, the other being in Alejuela - San Jose is 220 kilometers southwest. The airport code for the San Jose location is SJO.

It doesn't cost anything to get into the country, but there is a departure tax that needs to be paid before you leave the country. You pay it ($26.00) at the airport before you get to the counter and check in your luggage. They don't take colones, but they will take credit cards.

Location of the Airport, A Map with Major Landmarks

The New Modern Terminal - No More Stairs for Boarding 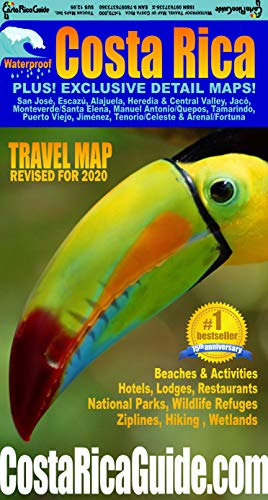 Flying Into The Airport - Old Terminal

Transportation from the Airport

Transportation to and from the airport. If you want to leave the airport on the cheap, you can take a bus. Public buses to and from Liberia and to Tamarindo and Playa Hermosa stop in front of the terminal every 30 minutes to an hour. Most of the passengers in the bus are Ticos who work at the airport and live in the outlying areas.

When you leave the airport, you will be solicited by taxi drivers. The taxis can charge as much as 15-20,000 mil in colones, depending on your ability to negotiate. Prearranged shuttles from hotels are frequently used.

There are several car rental agencies around the airport, including some of the well-known international companies like Hertz, National,Thrifty and Budget. They have shuttles to the agencies like they do in other countries.

Also as a cultural note, Costa Ricans have a different sense of time. This is a polite way of saying that they usually arrive late to whatever appointments they may have. There are exceptions, however. So, maybe you may make your travel arrangements to that your ground transportation gets there a little sooner to reduce that concern.

3. Photos of Flowers from Costa Rica