Room with a view

We first visited the Balearic Island of Minorca also called Menorca in October 2010. It was a two-week vacation to celebrate my husband’s 60th birthday. As it was late in the season we had no idea what to expect weather wise and we certainly had almost the full range of weather from gloriously hot sunny days to torrential rain and a chill in air.

We returned from another two-week late May vacation recently happily spent at the small and friendly Hotel Del Almirante, situated between Mahon and Es Castell, and decided it really does feel like a second home these days.

So what keeps drawing us back to this island and hotel?

For us the Hotel Collingwood, also known as the Hotel Del Almirante is like Minorca, small but perfectly formed.

So first up where is Minorca?

Minorca is the most eastern Island of the Balearics. This group of Islands belong to Spain and lie in the Mediterranean Sea. Minorca’s western neighbour Majorca is larger and more brash whilst Formentera is tiny. Ibiza which sits between Majorca and Formentera is known for its lively nightlife.

In 2010 we chose Minorca as our destination almost by chance.

The vacation was to be taken late October and finding a European destination that was still clement at that time of year, but was new to us, led us to Minorca.

We also came across our hotel almost by chance. Faced with one or two options the Hotel Del Almirante looked quirky, charming and definitely different.

Did it suit us? Yes it did and here is why.

The Hotel Del Almirante, or Collingwood House, was once the home of an English Admiral called Collingwood. A little poetic license may be seen around the place but the house was reportedly at one time the Admiral Collingwood’s home. The main house has belongings and artifacts that belonged to or relate to the Admiral.

It is rather like a cross between a museum and a rooms in a stately home.

That said staying at this hotel has something of the feel of taking a weekend break at a country home.

There are no neighbours next to this hotel which for us adds to its charm.

Collingwood House is situated between the Island's capital, Mahon and Es Castell. Its location makes it perfect for exploring the capital and the island.

For those with mobility issues, or those who simply do not walk or want to, there is a bus stop slap bang outside of the hotel. From here buses will take you into Mahon and into the central bus station for less than two euros.

From the station it is possible to take bus trips to various places around Minorca but it does depend on the time of year.

Many visitors choose to hire a car for all or part of their vacation some picking up their rental car atbthe airport.

We choose walk into Mahon or Es Castell a lot of the time as it is not a long walk but is enjoyable.

Going into and out of Mahon we have a few different routes, some more scenic than others. The most scenic has to be around the harbour looking down from above.

The Island has a safe feel which may encourage you to walk more than at home but always consider your safety. The hotel reception offer good advice about interesting walks and routes, and will even loan you a brolly if the need arises.

Public transport does not visit all areas of the island but in high season it does go further afield.

The Hotel is small but it does offer:

Looks inviting but the water is always chilly

Love it or loathe it?

This hotel is quirky and charming. If you like evening entertainment, all modern conveniences and luxury it may not be for you.

The average age of guests tends to be on the older side and it is not really a child friendly place but there is sometimes still an age mix. There is a family room away from the swimming pool area where most of the rooms are located and yes it is occupied occasionally.

This year there was also a couple of people from Switzerland hiking around the island with a cute little dog in tow but they had some tough lessons to learn.

The public buses do not allow dogs on board. That meant this couple had to use taxis at times to get from one base to another. It was costing them a small fortune but even that was not plain sailing for them.

Not all taxi drivers allow dogs on board. Those that do often want the dog held in a travel box or similar. As this dog was small that was easy.

So many guests love this hotel and make return visits

We must have visited at least eight times now.

Putting your finger on why we love this place we like to call our second home is never easy.

We are by no means the most returning guests as each year we encounter others who have visited for a few years or even many decades. They have watched themselves and the regular staff age along the way, experience bereavements, divorce, marry have babies and more.

The staff do have a knack of making every guest feel special.

But there are always some guests who are like fish out of water and hate the place. Sometimes just one couple but these people can never understand the attraction of Collingwood House.

That is their loss though.

We love to get a room wth a view

On a nearby recommended walk 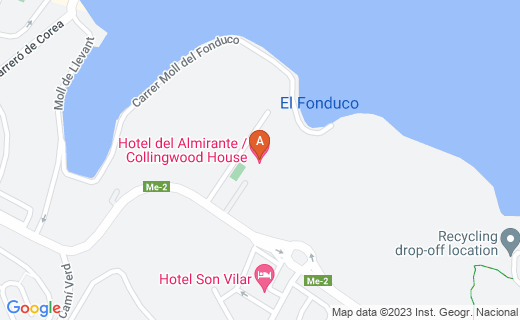 Hotel Del Almirante is relatively small and the house is set over two floors with less than 40 rooms available for guests.

There are no lifts or elevators but there are many ground floor rooms and most are easily accessible.

For our first stay here our room had a bathroom which included a shower, bidet, toilet and wash basin but rooms also have baths. The rooms were painted a relaxing primrose colour with dark wood furniture and the sleeping arrangement was twin beds. All rooms have however been recently refurbished.

The new colour scheme is on trend but the hotel retains its traditional charm.

Almirante opens for business each year at the start of May and closes its doors at the end of October.

Check out the Hotel's website for full details. With so many people returning each year it may be hard to be accommodated.

Whether it is our advancing years, or simply the charm of the place, the island and the staff is not clear but we keep coming back.

Minorca and the Hotel Del Almirante is special, but you will either "get it or you won't"