In 1960 my family moved to Buntingville, a former Methodist mission a few miles outside of mThatha (formerly known as Umtata) where my father became headmaster of the junior secondary school.

At first we were as a family not very happy to be there as our move came about through the demotion of my father by the then South African Department of Bantu Education for refusing to segregate the school's staff room (as told in my Hub The journey of my life).

But very soon the beauty of the area and the openness and friendliness of the people won us over and we were very happy there.

The house we lived in was the original missionary's house, built sometime in the late 1800s, with many additions made over the years as the demands of the missionaries' families changed. These additions caused some interesting happenings.

My grandmother Miemie McGregor came to stay with us one year and quite early one morning we had a very heavy downpour which caused a minor waterfall in the join between the old part of the house, where Granny's room was, and one of the additions, where the bathroom was. Granny, on her way to do her morning ablutions, was confronted by this sheet of water pouring down from the ceiling. Although this was something we had become used to, to her it was something of a surprise, but, being the enterprising and resourceful woman she was, she simply stood at the sheet of water coming down and used it to wash her face there and then!

While the house had its drawbacks, its position was quite glorious. It overlooked a wide valley and a little stream immediately down the rather steep slope from the front verandah. The views were quite extraordinary and in good weather or foul always had something interesting. Many afternoons my mother and I sat on the verandah and watched the dramatic play of lightening flashing down into the valley in great forks, followed by the rumbling and cracking of the passage of the electricity through the air.

On the slope of a hill just next to the house we would go (my mother and I) and collect the mushrooms which flourished after such storms, bring them home and fry them up in wonderful home-made butter. Something close to culinary heaven they were! My father was not impressed and refused to eat these delicacies, but I have ever since had a great love of wild mushrooms. The bought kind never quite taste the same.

On the same hillside were great big holes, the remains of the granaries of the local amamPondo people who had long since moved on, I'm not sure whether voluntarily or not, but those great holes were an endless source of fascination and conjecture for me.

There was a local trader, whose name was Schroeder, who was of German extraction. Indeed he spoke a strange mixture of German, English and isiXhosa, about which my father once commented that it must be quite difficult to go through life with three languages and not be proficient in any of them.

The stream below our house was a place I spent a lot of time wandering up and down, picking up pebbles smoothed by it over the years, and enjoying the little creatures that lived there - crabs and little fish and occasionally an otter. Also there were those rather scary lizards called in Afrikaans "likkewaan" or Iguana. These were known to invade chicken runs and steal all the eggs.

My favourite time of day was the early evening when the local youngsters would drive their father's cattle home to the kraals (a corruption of the word "corral") made of thorn tree branches, when the women would be lighting the fires for cooking the evening meals and so the air would be laden with the cries and whistles of the herd boys and the smell of fires.

Buntingville is situated in Western Pondoland in the chieftainship of the Ndamase family. Pondoland was the last area of the then Cape Colony to come under white rule when it was annexed in 1894.

We were fortunate to be able to go to the so-called Transkei Wild Coast for holidays. This coastline is indeed wild and beautiful, with some long, unspoiled beaches of white, soft sand and dramatic rocky outcrops over which the breakers crash, sending up huge sprays of foam.

We were, as white people, in a very privileged position and able to enjoy the sights almost as tourists, but for the people who lived there life was often harsh and poverty was rife. The years of colonial and then apartheid rule did little except exploit the area as a source of labour for the mines and industries of South Africa and raw materials like wool and maize, and a ready market for European manufactured goods like blankets, pots and pans, ploughs and other merchandise. Most white people in the area were either traders, missionaries government officials or policemen.

The people of the area were warm and hospitable in spite of the hardships and the oppression they suffered. Pondoland was the scene of much violence against the local people who were bitterly opposed to apartheid and made their grievances known.

As a result the apartheid government was ruthless against them. As Govan Mbeki (father of former President Thabo Mbeki) wrote in his seminal book The Peasants' Revolt (Penguin, 1964): "The government suppressed the revolt by bringing in the military to assist the police, by using sten-guns, Saracen armoured cars, and jets against unarmed peasants, by terrorism and mass arrests."

Mbeki traced the origins of the revolt against the imposition by the apartheid government of so-called"Bantu Authorities", established in terms of the Bantu Authorities Act, to the relative independence of the amamPondo people and their late incorporation into white controlled South Africa:

"Here, as probably nowhere else, the missionaries, most of them from the Wesleyan Church, exercised great influence over the principal Chiefs. Chiefs’ sons, the heirs to chieftainship, were trained at the homes of the White missionaries, many living with them as members of their families. On the completion of their apprenticeship, they returned to their people, bringing vigour and a new approach to the conduct of chieftainship.

"Both at Qaukeni (Eastern Pondoland) and Nyandeni (Western Pondoland), the Chiefs erected modern offices and conducted cases on the pattern of a magistrate’s court. With slight modifications to adapt the pattern to real conditions, the Pondo courts had officers, a dock, a fairly good recording of proceedings, and proper systems of filing."

As a result the people did not want to accept the imposed administration, having had their own for so many years.

Discontent rose to a high pitch until, as Mbeki relates, "A vast popular movement of resistance arose amongst the people in March 1960, and although meetings were illegal, they were held just the same and attended by thousands of peasants, who came on foot and on horseback to chosen spots on the mountains and ridges."

On one such hill between the villages of Bizana and Lusikisiki a large group of amamPondo tribesmen gathered and, in spite of them flying a white flag very prominently, were attacked by apartheid forces and two planes and a helicopter dropped smoke bombs and teargas on the gathering. Eleven of the men were killed in the ensuing fight. At the inquest after the massacre the magistrate found that excessive force had been used.

Of course the government kept this kind of news as quiet as they could, enforcing a news blackout by means of the infamous Proclamation 400 which to all intents and purposes established martial law in the Transkei. So whites generally did not hear of these things, but even if they had, many would most likely have approved of the actions of the government.

The beauty of the Transkei hid a terrible truth - people were being killed in the name of an ideology, a justification for continued oppression and subjugation of a proud and independent people. 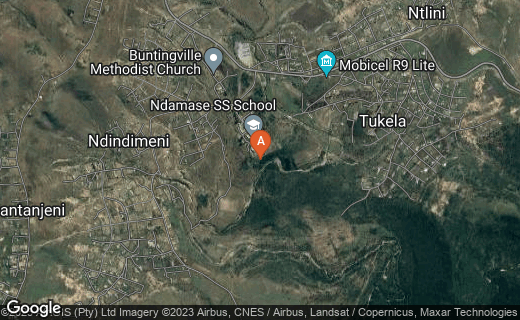