Rambling in France: Vayres and the Chestnut Drying House

Vayres, Limousin and the sweet chestnut

It is said that "If the Chestnuts and turnips are lost, then France will be ruined", and it is true that an area like Limousin relied heavily on the Chestnut, cabbages and root vegetables to see the people through the winter.The pretty village of Vayres is so very typical in that respect and still retains at least one cledier, or chestnut drying house.

The Limousin is an area of rivers, lakes, flower meadows, and oak and sweet chestnut forests and you will see many signs of the importance of the chestnut to this area as you enjoy your rambling holiday.

The walk that I would like to share with you will take you through the woods and fields around the pretty village of Vayres, along paths and lanes past a chestnut drying house and a now disused serpentine stone quarry.

Vayres is situated in the Region of Limousin, and the department of the Haute-Vienne (87). It's about ten minutes from Les Trois Chenes gîte (or holiday cottage) and Bed & Breakfast.

Walking and rambling in Limousin, France

Limousin is a wonderful place for ramblers and walkers. The roads are empty and the paths numerous. There are short walks and long walks and plans are a-foot (no pun intended) to link the local paths to regional long-distance trails. In 2003 the Conseil Général, (the governing body) of the Haute-Vienne put in place a plan to create a system of paths in order to promote walking and tourism in the area. You'll find that the footpaths are well maintained on the whole and clearly marked. Although we have rolling hills, we don't have mountains and you are rarely far from a village so the walking is not too trying.

This region is lovely all the year round. The winters are cold but often clear and sunny. We do get snow sometimes but not more than a few centimeters and it rarely lasts more than a few days. Of course, for a land of lakes and rivers, we get a fair amount of rain, especially in winter. The countryside in spring is a-wash with flowers, summers can be hot, but then you can cool off in the swimming lakes, and the autumn colours are spectacular.

For a very long walk indeed why not join the Pilgrim Route of Saint Jacques, the Camino de Santiago? One of these routes begins in Vézelay, France, and then passes through Limoges and Les Salles, not far from Vayres where the pilgrims would visit the church of Saint Eutrope. 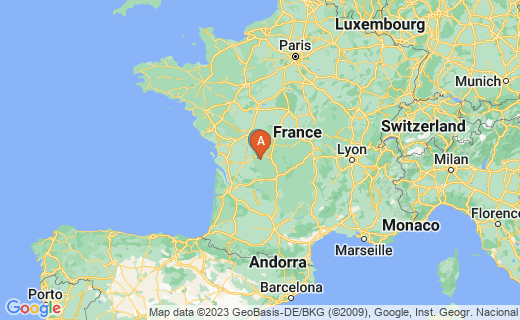 A walk around Vayres-les-Roses, village of Roses

Vayres has been associated with the Rose for over 30 years and in 2003 the town entered into an association with the Parc Naturel Régional Peridord-Limousin to work together to enhance the theme of the rose. Even the streets are named after roses.

You might also enjoy walking around the quaint streets arranged around an attractive church. There used to be a village fountain, it remains but the surrounding area has been upgraded. There is a tiny play area and next to this there is a small herd of miniature goats. All small things but often it's the small things in life that you remember the most vividly.

Google maps shows the route through the Limousin countryside around Vayres 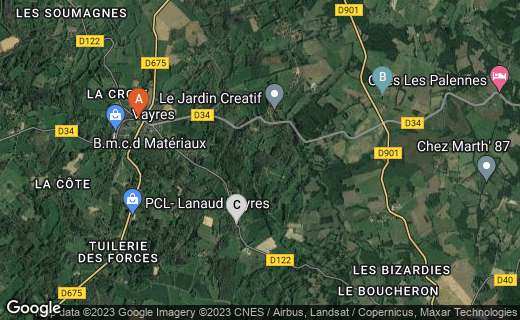 The quarry is just north east of Merlis

Want to know how I marked this walk in France and saved the map?

The walk starts in the centre of Vayres

The Serpentine walk around Vayres

Start in the market square outside the school, (map of the route). The village has made a little offering in hommage to the now defunct serpentine stone quarry, le Carriere de Merlis. You walk past the school towards Rochechouart and you'll find the footpath that takes you through the fields towards the chestnut drier at La Treille.

The hamlet of La Treille

About half way along this section of the walk you cross a small river and there's a picnic table so that you can stop for a snack or for lunch. Continue and you arrive at the settlement, (village is too grand a word) of La Treille. The farm houses and buildings, are, never-the-less quaint and one barn has an interesting display of ancient farm tools. At least I think they are on display, they could just be conveniently stored.

Look around and you'll find the Clédier behind one of the houses.

You'll pass the farm house with a rabbitery, or lapiniere, which is typical of the region.

Clediers or Chestnut dryers of Limousin

Limousin is the land of the chestnut and this tree provided food for the people who lived from the land. They found many ways to use and to conserve the chestnuts. Drying them proved to be the best method and in the batttle against humidity, and at first they were suspended over the fire but this method was slow and the quantities were limited.

Small, round buildings were built instead. In the Haute Vienne there are nine clediers, seven round and two square. In addition to the one at Treille, there are at least two in the nearby small town of Cussac. They were usually about 6 - 9 meters square, sometimes attached to bread ovens and were often used communally.

A small fire of selected herbs was lit at the base of the cledier underneath the chestnuts, and the fire was kept going for about three weeks. The fire was constructed in such a way as to give off smoke rather than flames. The chestnuts, once dried were stored in the 'greniers', the roof space of the houses and a cross between an attic and a barn, where they would keep until the following June.

In Limousin the chestnuts were ground to make flour, and incorporated into many of the local dishes.

Where to find Chestnut dryers in the Limousin and the Natural Park of Perigord-Limousin:

The disused Serpentine Quarry is spooky

There is something spooky about this disused quarry, and as an artist I find it just full of inspiration. You can't see from the photographs but just to the left of the picture above there is an american style trailer truck (not sure if that is the word). Neither my son nor I fancied looking into the cab, I for one had no intentions of going too close, I've seen way too many American horror films for that.

The bee hives, though, I love. You'll see bee hives everywhere in the Limousin countryside, from large groups like these to the two or three that most farms seem to have. At Les Trois Chenes we keep hives in our vegetable garden and sell our totally natural honey in the B & B.

Sunshine on the pond at the quarry just outside Vayres, Limousin

The old Carrier de Merlis mined Serpentine. You can see it in the picture at the begining of this article, that serpentine is a dark green stone, and that is as much as I'm willing to learn about it at the moment. For more information about Serpentine have a look at this article:

"Any of a group of magnesium-rich silicate minerals whose composition resembles Mg3Si2O5(OH)4. Serpentine generally occurs in three forms: as chrysotile, the most common variety of asbestos; and as antigorite or lizardite, both of which are commonly massive and fine-grained. Named in allusion to its resemblance to a snake's skin, serpentine is usually grayish, white, or green but may be yellow or green-blue. It takes a high polish and is sometimes used as an ornamental stone".

This walk is designed so that you can discover wild flowers, and especially the rose (or Rosaceae family) there are booklets available at the Marie in Vayres and Tourist information Offices, the start of the trail, and these tell you a bit about the plants along the way.

Where to Stay Near Vayres on you rambling holiday in France

Stay at Les Trois Chenes! Stay with us at our B&B and holiday cottage (or gite). We are just ten minutes from Vayres, and about fifteen minutes from Rochechouart.

We are half way between Limousin and Angouleme.

Check out our web site www.lestroischenes.com 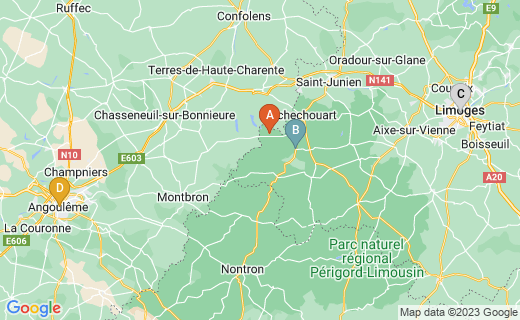 Painting holidays, B and B, three star Gite

France on Foot: Village to Village, Hotel to Hotel: How to Walk the French Trail System on Your Own
Buy Now 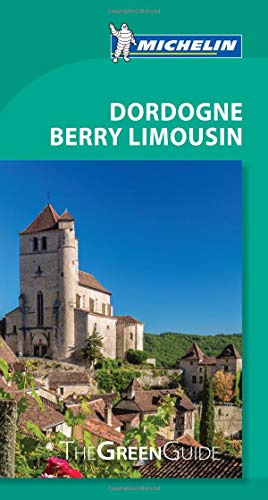 More about life in Limousin

Are you planning a walking holiday in France?

Will you be walking in Limousin?

Do leave your thoughts on rambling in France, Limousin and chestnuts