The Historical Beauty of Split, Croatia

Split is the largest and the most important city Dalmatia region. It is also considered as Croatia’s second largest city. The place is situated on a small peninsula on the eastern side of the Adriatic Sea.

Split became the most important city because of its busy port. As the port typically serves as the starting point for exploration of the whole coast, from Adriatic to Italy to Greece. Most agricultural land in Split is fertiled which made their place bountiful of agricultural products. Moreover, the city was able to preserve their cultural monuments, landscapes, and seascapes which attract most of the tourist visiting the place.

At the end of the third century AD, Split was ruled by the Roman Emperor Diocletian and a palace was built in here. The importance of Diocletian’s Palace goes beyond the local significance because of the high level of the structure's preservation. Even all of their well-preserved buildings and walls, from the heart of Old Split, have been a part of their successful tourism today.

Split’s population growth moved rapidly during 7th century since all the inhabitants of the destroyed Greek and Roman metropolis Solin found their protection within the walls of the place. The lovely ruins of Solin outside the city can still be explored today.

Diocletian’s Palace has been one of the most famous attraction in Split since it was chosen as one of the UNESCO World Heritage Site of Croatia back in 1979. Based on history, Emperor Diocletian built the palace for the sole purpose that it will serve as his home upon retirement. As the Emperor moved into the palace, half of the area was occupied by him. While the other half served as rest house of the military garrison.

Structure-wise, the palace has an irregular rectangle with 4 large towers in total. The main open space of the Palace is known as the Peristyle. It is surrounded by a colonnade of six columns (made of granite and marble) to both eastern and western sides and an arch with garland decorations. It can be easily noticed that the walls on the lower part of the palace don’t have any openings, while on the upper part have openings with monumental porch.

Today, the palace remained to be well-preserved structure. Though plenty of cafes, restaurants, shops, and apartments were already built within the vicinity which made the place more convenient for tourists. No need to go somewhere else to buy whatever you will be needing. Even an on the go meal is available everywhere. This kind of meal will be very pleasing to those who wanted to maximize their time strolling around the area.

Did you know that it took over 10 years to build the Diocletian Palace since it was so huge? It measures 215 meters wide and 26 meters high. 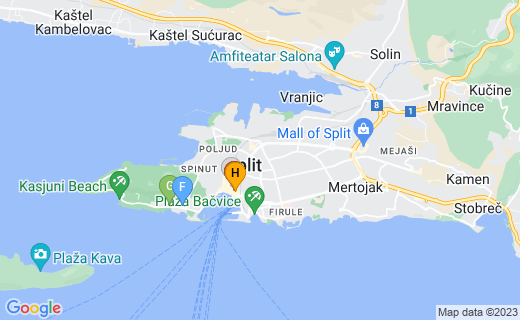 One of UNESCO World Heritage Site

Old Town Hall in the Old Town of Split Croatia

Sculpture of a Famous Croatian Leader

Small Gallery in Croatia with all the maritime relics and arts.

Museum based on researching and collecting of artifacts.

The cathedral was named after Saint Domnius.

Beautiful Places You Must Visit