Ten Things to do in Kandy, Sri Lanka.

The Background of Kandy City

Kandy is one of the ancient kingdoms of Sri Lanka which existed from 1592 to 1815. The City of Kandy exists since 1357 after Wickramabahu-III the king of Gampola established it. Kandy City is situated in the Kandyan plateau, at the height of 1526 feet above mean sea level. Kandy is located on latitude 7.296961N and longitude 80.638453E. 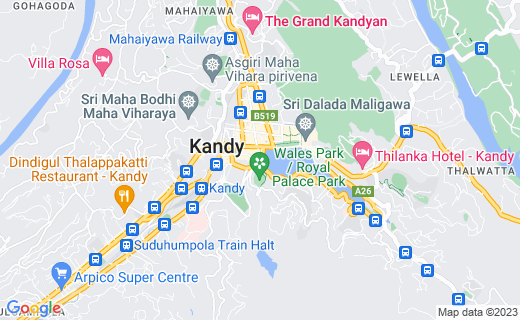 Once you reach Kandy, there are a lot of things for your enjoyment and experience. Here are the best 10 things you can do in Kandy.

Dalada Maligawa Museum is situated just behind the Sri Dalada Maligawa. You can enter it both from behind Dalada Maligawa, or via the road outside. There is a massive collection of artifacts, pictures and details about international Buddhist relationships to Sri Lanka. It includes rooms for each country such as India, Nepal, Pakistan, Japan, China, etc. A nice place to walk about and spend your time while gathering some knowledge of a few unknown things.

There is a smaller building by the side of the Royal Assembly Hall (Magul Maduwa). In it, the preserved body of Raja, the grand tusker who carried the sacred tooth relic of Lord Buddha in the Esala Perahera pageant from 1950 to 1987, is kept in exhibition. The tusker was declared a 'national treasure' when he was still alive, in 1984, by the government of Sri Lanka. Raja died in 1988, and the day was declared a national mourning day. This is the only stuffed elephant in Sri Lanka, and it is worthy of seeing.

3. Take a Walk Around Kandy Lake

Catch a picturesque and romantic view while walking around the lake. This lake was built in 1807 by the last king of Sri Lanka to add beauty to the city and the palace. A diversity of birds and other animals can be seen around and in the lake. Kandy lake is full of freshwater fish. Both children and adults enjoy throwing boiled chickpeas or popcorn to the lake fish. It is fun to see how the school of fish jump out to catch a piece of food in mid air! Fishing is prohibited in Kandy Lake because it is in the sacred city.

When you start walking along the ornate boundary of Kandy Lake from in front of Queen's Hotel you come to a small pier with a traditional style roof halfway down the road. This is the Joy Boat Service which offers you a boat ride from that point to the far end of the lake and back. A fun-filled trip!

Udawattakele is an urban forest reserve and a wildlife sanctuary situated adjoining the Sri Dalada Maligawa. This forest was the ancient pleasure garden of the Kandyan kings. Now it is under the administration of Wildlife Conservation Department. There are a huge collection of trees and shrubs, along with some harmless animals who have made it their home in Udawattakele. Be careful not to give any food, at least a peanut, to the appealing monkeys because they would not leave you from then on. You may also visit the forest reserve office which is in the sanctuary itself to see the specimens of fauna and flora which can be seen in the sanctuary.

The Royal Botanic Gardens of Peradeniya is met along the Kandy-Peradeniya road, just after the Peradeniya Guest House, when you are traveling towards Peradeniya. The Botanic Garden is started as a replica of Kew Garden in southwest London, England in 1843 by Alexander Moon. Today, this 59 hectares large reservation of over 300 varieties of plants and trees including orchids, spices, and palms, etc, is maintained by the Agriculture Department. During world war II, the supreme commander of the allied forces in the South Asia, Lord Mountbatten, used Peradeniya Botanic Garden as the headquarters of the South-East Asia Command.

You can reach the Commonwealth War Cemetery along Deveni Rajasinghe mawatha down by the right bank of River Mahaweli. Enter Deveni Rajasingha Mawatha from the junction at Kandy Municipal Council Water Treatment Plant. This road runs along the right bank of River Mahaweli and gives you a picturesque view of the river right up to the War Cemetery. Kandy War Cemetery is one of the most beautifully landscaped and maintained war cemeteries in the world. So nicely laid out, to my observation it is only second to the arrangement of the Peradeniya Botanic Garden. There is one Commonwealth burial of the 1914-1918 war and a further 196 Commonwealth burials of the 1939-1945 war commemorated here.

This place is of a highly memorable value. It was previously the four-storied Hantana Tea Factory, built in 1925. Now it has been elegantly converted to a Tea Museum by the Sri Lanka Tea Board and the Sri Lanka Planters' Association. Tea Museum can be reached along Hantana Road, about 5Km south of Kandy. Here, you can see all the traditional equipment used in Sri Lanka's tea industry over 60 years back. It is comprised of a library and an audio-visual presentation section, a tea sales outlet, and a fine restaurant.

There are two places in Kandy to see the tame elephants bathing. One is the old elephant bath at Katugastota, and the other is the new spot at Dodanwala. Both places are along the River Mahaweli, the one grand waterway that flows winding between the hills of Kandy. Katugastota elephant bath had been used for about a century for bathing elephants. Looking at the bathing elephants is a lot of fun. Bathing helps to keep these giants happy and cool too.

Last, but not the least. Kandy City Center is the latest shopping complex out of Colombo, with a large multi-level parking space. Its architecture follows the traditional Kandyan style. You can buy things from organic food and souvenirs to laptops, have snacks with tea, fruit juice or ice cream and spend some time relaxing.